What I read about religion in American politics always makes me feel rather uneasy. The words that come to mind are stridency, intolerance, exclusion, hang um high!, cut taxes and damn the poor. And what I find most interesting is that religious conservatives will enthusiastically endorse a candidate because he is supposedly a 'believer' and not worry too much that when he takes office he lies, stabs people in the back, 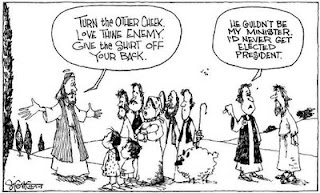 destroys his opponents' reputations, arranges 'sweet-heart deals' and does many other things that I would have thought were rather at odds with 'Christian values' (reminds me of religion in Sri Lankan politics). Less strange perhaps, is that the candidates that talk least about their religious beliefs sometimes appear to be most - I'll use the word, 'spiritual.'
Take this speech that President Obama delivered recently at a prayer breakfast (Prayer breakfast!! Woofing down fried eggs on toast while talking to God is not my idea of either 'prayer' or 'breakfast'. Is this what they call 'multi-tasking nowadays?). It impressed me in itself, but it also reinforced my impression that a thoughtful and decent person now occupies the White House. Read it and see what you think.

Good morning. I want to thank the Co-Chairs of this breakfast, Representatives Heath Shuler and Vernon Ehlers. I’d also like to thank Tony Blair for coming today, as well as our Vice President, Joe Biden, members of my Cabinet, members of Congress, clergy, friends, and dignitaries from across the world.Michelle and I are honored to join you in prayer this morning. I know this breakfast has a long history in Washington, and faith has always been a guiding force in our family’s life, so we feel very much at home and look forward to keeping this tradition alive during our time here. It’s a tradition that I’m told actually began many years ago in the city of Seattle. It was the height of the Great Depression, and most people found themselves out of work. Many fell into poverty. Some lost everything. The leaders of the community did all that they could for those who were suffering in their midst. And then they decided to do something more: they prayed. It didn’t matter what party or religious affiliation to which they belonged. They simply gathered one morning as brothers and sisters to share a meal and talk with God. These breakfasts soon sprouted up throughout Seattle, and quickly spread to cities and towns across America, eventually making their way to Washington. A short time after President Eisenhower asked a group of Senators if he could join their prayer breakfast, it became a national event. And today, as I see presidents and dignitaries here from every corner of the globe, it strikes me that this is one of the rare occasions that still brings much of the world together in a moment of peace and goodwill.I raise this history because far too often, we have seen faith wielded as a tool to divide us from one another – as an excuse for prejudice and intolerance. Wars have been waged. Innocents have been slaughtered. For centuries, entire religions have been persecuted, all in the name of perceived righteousness. There is no doubt that the very nature of faith means that some of our beliefs will never be the same. We read from different texts. We follow different edicts. We subscribe to different accounts of how we came to be here and where we’re going next – and some subscribe to no faith at all. But no matter what we choose to believe, let us remember that there is no religion whose central tenet is hate. There is no God who condones taking the life of an innocent human being. This much we know. We know too that whatever our differences, there is one law that binds all great religions together. Jesus told us to 'love thy neighbor as thyself.' The Torah commands, "That which is hateful to you, do not do to your fellow.' In Islam, there is a hadith that reads 'None of you truly believes until he wishes for

his brother what he wishes for himself.' And the same is true for Buddhists and Hindus; for followers of Confucius and for humanists. It is, of course, the Golden Rule – the call to love one another; to understand one another; to treat with dignity and respect those with whom we share a brief moment on this Earth. It is an ancient rule; a simple rule; but also one of the most challenging. For it asks each of us to take some measure of responsibility for the well-being of people we may not know or worship with or agree with on every issue. Sometimes, it asks us to reconcile with bitter enemies or resolve ancient hatreds. And that requires a living, breathing, active faith. It requires us not only to believe, but to do – to give something of ourselves for the benefit of others and the betterment of our world. In this way, the particular faith that motivates each of us can promote a greater good for all of us. Instead of driving us apart, our varied beliefs can bring us together to feed the hungry and comfort the afflicted; to make peace where there is strife and rebuild what has broken; to lift up those who have fallen on hard times. This is not only our call as people of faith, but our duty as citizens of America, and it will be the purpose of the White House Office of Faith-Based and Neighborhood Partnerships that I’m announcing later today. The goal of this office will not be to favor one religious group over another – or even religious groups over secular groups. It will simply be to work on behalf of those organizations that want to work on behalf of our communities, and to do so without blurring the line that our founders wisely drew between church and state. This work is important, because whether it’s a secular group advising families facing foreclosure or faith-based groups providing job-training to those who need work, few are closer to what’s happening on our streets and in our neighborhoods than these organizations. People trust them. Communities rely on them. And we will help them.We will also reach out to leaders and scholars around the world to foster a more productive and peaceful dialogue on faith. I don’t expect divisions to disappear overnight, nor do I believe that long-held views and conflicts will suddenly vanish. But I do believe that if we can talk to one another openly and honestly, then perhaps old rifts will start to mend and new partnerships will begin to emerge. In a world that grows smaller by the day, perhaps we can begin to crowd out the destructive forces of zealotry and make room for the healing power of understanding. This is my hope. This is my prayer. I believe this good is possible because my faith teaches me that all is possible, but I also believe because of what I have seen and what I have lived. I was not raised in a particularly religious household. I had a father who was born a Muslim but became an atheist, grandparents who were non-practicing Methodists and Baptists, and a mother who was skeptical of organized religion, even as she was the kindest, most spiritual person I’ve ever known. She was the one who taught me as a child to love, and to understand, and to do unto others as I would want done. I didn’t become a Christian until many years later, when I moved to the South Side of Chicago after college. It happened not because of indoctrination or a sudden revelation, but because I spent month after month working with church folks who simply wanted to help neighbors who were down on their luck – no matter what they looked like, or where they came from, or who they prayed to. It was on those streets, in those neighborhoods, that I first heard God’s spirit beckon me. It was there that I felt called to a higher purpose – His purpose. In different ways and different forms, it is that spirit and sense of purpose that drew friends and neighbors to that first prayer breakfast in Seattle all those years ago, during another trying time for our nation. It is what led friends and neighbors from so many faiths and nations here today. We come to break bread and give thanks and seek guidance, but also to rededicate ourselves to the mission of love and service that lies at the heart of all humanity. As St. Augustine once said, 'Pray as though everything depended on God. Work as though everything depended on you.' So let us pray together on this February morning, but let us also work together in all the days and months ahead. For it is only through common struggle and common effort, as brothers and sisters, that we fulfill our highest purpose as beloved children of God. I ask you to join me in that effort, and I also ask that you pray for me, for my family, and for the continued perfection of our union. Thank you.
Posted by Shravasti Dhammika at 3:02 AM

Let me tell you, as Americans we're a little stunned by this rhetoric, after the bludgeoning of the past decade or two. I see in Congress their hateful habits are dying hard, but I've seen Obama accomplish the most amazing thing -- shaming people without making them feel ashamed. Just getting them to try to drop the nastiness and divisive thought patterns and do better. It's right speech, man, and I'm fer it.

Don't forget that the Christian American politicians, while doing all the things you mentioned above, also look down at places like Sri Lanka... hell, the rest of the world.... as bassackwards and ignorant. They wouldn't be keeping with centuries of Christian tradition if they didn't look down on everybody else while thinking that Jebus was sanctioning what they were doing.

As for Obama, I was impressed with what he had to say. If it isn't him, he has one hell of a speech writer. Actually, I've been impressed with him since the beginning. He was my bet since he announced his candidacy. Though there are a few things I'm somewhat disappointed with, overall I think he is doing a good job, especially for the few weeks he's been in office.

I use to be a fundamentalist Christian, and then swayed hard to being a zealous atheist. Buddhism has helped me find the Middle Way.

Anonymous said...
This comment has been removed by a blog administrator.
February 8, 2009 at 3:53 AM

this is a really moving speech.

The world is sinking but there is a glimmer of hope. A good man with good brains has emerged who has the clout to do a lot for the world and mankind. Let's hope he don't disappoint and the devas and bodhisattvas protect him so he can do what he should do.