Questions From Scott And Alessandro

In a comment on my post about ghosts (2nd 7th 2010) Scott asked what he called a ‘slightly impertinent question’ Slightly! I was so outraged by his impertinence that it took me two whole days to calm down. My support group helped. Anyway, now that I’m half way back to normal I will try answering his question which was this. ‘Buddhists often like to portray their faith as a modern religion with a rationalist bent, capable of coexisting with modern science. Yet belief in petas sits ill at ease with either rationalism or science...Given that one cannot see a peta, do any sort of scientific test to confirm their existence, or fit their existence into what we know of modern science, is it reasonable for a modern Buddhist to believe in these entities? If so, I feel I'm being asked to take something on faith, or to apply a standard of evidence that I wouldn't accept coming from another religion. If belief in petas is not justifiable today, what sense do we make of the Buddha's statements regarding them? Could they be meant allegorically? Is to be reborn as a peta the same as having a desperate, craving state of mind in this very life, as Buddhadasa suggested?’
I do feel that the central conceptions of Buddhism are empirically verifiable, non-mystical and rational, or at least that they do not stretch credibility to breaking point. By this I mean the Four Noble Truths, dependant origination, kamma and the possibility of human enlightenment. I would maintain that the reality of petas does not come anywhere near an essential teaching of Buddhism and that being a Buddhist does not depend in accepting the reality of petas. As I pointed out, the Buddha considered discussing petas to be a type of useless chatter so their reality or otherwise could hardly be considered important.
Further, we do not have to depend on Buddhadasa for the idea that petas might be just an allegory. The Buddha suggests that purgatory might be taken as a metaphor for unpleasant experiences. ‘Ordinary ignorant people says that purgatory is under the sea. But I say purgatory is a name for painful feeling.’ (S.IV,206). This being so, the peta realm could just as easily be a name for the distress of unfulfilled desire and ambitions. So Scott, I think you can safely reject the idea of petas and still practice the Dhamma and benefit from it. I would encourage you to focus on the essentials.
In a comment on my post of 10th 7th 2010 Alessandro informed us that a Korean monk recently committed suicide in protest at some of his government’s policies and asked me what I thought about this. Firstly it should be mentioned that quite a few Mahayana sutras, starting with the Saddharmapundrika Sutra (Lotus Sutra), praise suicide, usually by self-immolation, where it is done as an offering to the Buddha. There were periods in Chinese history when so many people, mainly monks and nuns but sometimes lay people too, were doing this that several emperors had to outlaw it and threaten punishment for the crowds who usually came to watch, if they did not intervene to stop it - see for example James Benn’s Burning for the Buddha – Self-immolation in Chinese Buddhism, 2007 and Jan Yun-hua’s ‘Buddhist Self-immolation in Medieval China’, HOR, Vol. 4 No 2, 1965, both of which make rather troubling reading. So what this monk has done has a long and scripturally-sanctioned tradition behind it.
I can think of a few situations where suicide could be understandable but certainly not as a protest against environmental or social policies. I consider this, like burning oneself as an act of devotion, to be an example of religion gone mad, a sort of aberration of the type that have infected most religions from time to time. I would take Thich Quang Duc’s self-immolation in 1963 (picture) to be in a slightly different category. He was protesting against a particularly intransigent, cruel and corrupt regime and his sacrifice led directly to changing that regime and a marked improvement in the situation. 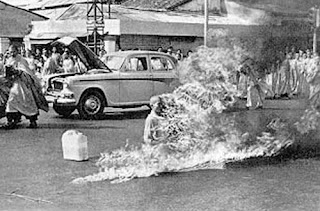 Jan Palach’s 1968 sacrifice would be similar. We do not know the thinking or the mental state of this Korean monk before he killed himself but I would assume he was unbalanced in some way. If he felt that the government’s policies were wrong or unjust he could have done more to change them by staying alive and campaigning against them. And to go to such extreme lengths to try change the decisions of a democratically elected government when other channels are available is, to my mind, unnecessary and undermining to democracy by indulging in blackmail.

Thank you for your clear reply, bhante. Perhaps your next book should be entitled "Impertinent Questions, Clear Answers"!

I hope your posting here doesn't attract too many impertinent replies!

Well, I hope this reply is no too impertinent, so let me first start with the sacrifice thing.

Actually, my first conscious contact with buddhism was when I saw a documentation on TV about Tibetan monks. These monks meditated in caves until death, to sacrifice themselves. What caught my attention was that their bodies did not decay, but were mummified without further treatment, a kind of miracle. Thats it why I started to study buddhism.

And know to the "impertinent" part. As buddhist and as neuro-scientist with education in western philosophy of mind I must say that I do not think that the claims Buddha made can be validated empirically.

First of all, although Buddhism does not postulate a classical dualist concept of mind and matter, like Descartes for example did, mind is in a way not reducible to matter. In case of "reincarnation" mind must be independent from the body to cause another mind after the death of the current body. That does not got along with science at all, as it is base on physical ontologism: There is only matter in the universe, a universe which is identical to our universe in all material aspects is identical in all mental aspects. And science is also based on the causal closure of the physical domain: If a physical event has a cause (occurring) at time t, it has a sufficient physical cause a t. The last obviously contradicts the concept of reincarnation.

A western philosophy which is similar to Buddhism is emergentism. In short it says that a system which is complex enough can exhibit mentality whereas the mentality then cannot be reduced to the matter anymore or to put it differently: A system is more than the sum of the properties of the system's parts.

That is why scientist cannot explain the mind by investigation the matter. But also this philosophy faces serious problems: How can a mental system, which relies on a material basis, but is not material can have an influence on matter? (See causal closure of the physical domain)
A view called epiphenomenalism. The consequences are that your wanting or your desire cannot influence your material body. The only solution to this problem is to identify mind with matter, which contradicts buddhism.

This was very, very brief, you might want to check Wikipedia and look up emergentism or epiphenomenalism.

One more point, kamma: Kamma in the here and now would be acceptable for science, being nice to people makes them nice too (Lets keep the intention out), but kamma which influences your next "incarnation"? No way!

Maybe in a sense Buddhism is rational and intuitively right, to me it always was. Nevertheless, I would not say that it goes along with science at all, even Hinayana, not to mention Mahayana or Vajrayana.

In the end, I simply do not care. Why does Buddhism needs to be validated by science at all? Would you throw it away, even if it works for you?

Ben's comments raises an interesting and likely controversial question ... if one adheres to a "kamma in the here and now" only viewpoint, is this still Buddhism even? Buddhism as contained in the Pali canon contains a fair amount of tolerance of questioning, skepticism, and doubt, but where the limits of this questioning lie is not clear.

I have heard it said that the ripening of kamma from one life to the next is an essential part of Gotama's teaching. I have also heard others describe it as a literalistic, even Hindu-influenced misinterpretation of something the Buddha originally meant metaphorically. I think it's one thing to decide that belief in petas is not a core Buddhist belief. What about belief in literal rebirth itself? If the Buddha said that ‘Ordinary ignorant people says that purgatory is under the sea. But I say purgatory is a name for painful feeling.’ (S.IV,206), could he have also said the same thing about being reborn as a deva? As an animal? As another human even? Could a hardcore materialist (in the philosophical sense) find a place in the Buddhist community?

The Buddhas teachings are provable and verifyable....... but you may have to work hard to get it. Personal proof can be got from practice.... meditation...but there would be no proof to show anyone else.
Paccatam veditabo vinyuhitti....