I have always liked the Jains. During my travels throughout India every Jain I have met without exception has been respectful, helpful and generous. When I visited Palitana in Gujarat the only problem was that they wouldn’t let me leave, so intent were they on offering me their hospitality. Now tha 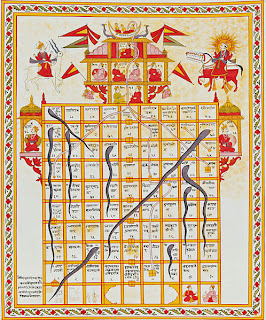 t I have discovered that the Jains invented Snakes and Ladders I like them even more. As a child, my older sister and I and the kids next door used to play this game all the time. I can still remember the snake’s head in the square Pride and its tail in the square Fall. Tradition says that the Jain saint Gaydev invented Snakes and Ladders in the 13th century to teach children the cardinal virtues. This story is perfectly plausible. Anyone who has ever stayed with Jain monks will know how diligently and creatively they minister to the lay community. The great Indiologist A. L. Basham thought that one of the reasons why Buddhism disappeared in India and Jainism didn’t was because of the attentiveness of the Jain monks towards the laity. It’s an interesting theory. The Jains call Snakes and Ladders Moksha Patamu, Liberation and Decline, which would be Mokkha Patana in Pali. I wonder if the Buddhists of ancient Gujarat played Snakes and Ladders too. The most ancient version of the game have 72 squares and the virtues are faith, reliability, generosity knowledge and simplicity. The vices are disobedience, vanity, rudeness, theft, dishonesty, drunkenness, debt, killing, anger, greed, pride and lust. The last square on the top left is Nirvana. What a delightful and fun way to teach children basic goodness! I suspect that young kids today would be bored stiff by Snakes and Ladders. It wouldn’t have a chance against video games. But to me the game brings back fond memories of a more simple and innocent time.
Posted by Shravasti Dhammika at 1:44 PM

Very interesting. It seems to me that snakes and ladders is inherently interactive, and therefore would make a great game - if only someone had the imagination that seems so short on the ground these days.

this is such an interesting post! thank you Bhante. i also wonder if the snake (that punishes one in the game) has any link to the idea of the snake in the garden of eden. hmmm... yes, thanks again Bhante!

Dear Peace,
In India the snake is never associated with evil. In this game the snake’s role is not to punish but to slide down. You climb the ladder and slide down the snake’s smooth (i.e. slippery) body.

Huh. I didn't know that!

In some parts of Africa, the snake is a most honored and trusted animal because it is one of the few animals whose whole body touches the ground.

Fascinating! What a wonderful idea for a game. In the west we have a secular game for children called Chutes and Ladders that looks very similar, but without the valuable life lessons. Thanks for sharing this info.

I remember playing 'Snakes and Ladders' as a kid. I still can recall the 50s style artwork. I never knew it had deeper origins than Parker Bros. boardgames.

Thanks Bhante. You brought to light some pleasant childhood memories for me.

This game is new to me, but there are similar ones in my childhood.

I found this article fun and with teachings, specially about your descriptions against the Jains in India.

As a Buddhist, I try to 'correct' my prejudice against Jainism.

and, I have your article translated in Chinese. Please let me know if you do not like it, I would delete it from my Blog immediately.

I remember playing snakes and ladders when I was still a kid. Playing that was fun. Anyone can enjoy that kind of game.