In his comment to my posting of 6th October Terrance included an article by Mettanando Bhikkhu about what might have caused the Buddha’s death. It is an interesting article although I have problems with some of its key points and interpretations of the evidence. This is my own take on the subject.
The Digha Nikaya records that before the Buddha passed away he ate a meal given to him by a blacksmith named Cunda. This meal consisted of a preparation called sukara maddava which can be translated as ‘pig’s delight’ (D.II,127). There has been a great deal of speculation as to what this meal consisted of. Some say that it was a pork dish, which is quite possible as the Buddha was not a vegetarian and did not advocate vegetarianism. One of the more bizarre theories and one that has gained wide acceptance is that it was a type of truffle or mushroom. Early European scholars of Buddhism theorized that as the French use trained pigs to find truffles, the ‘pig’s delight’ mentioned in the Buddhist scriptures might be a variety of truffle or mushroom. This theory is based on the false premise that what is so of the French countryside must have been so in ancient India. In fact, truffles do not grow in India and the use of trained pigs to find them, even in France, is a recent practice.* The usual Pali word for mushrooms, toadstools and other fungi is ahihattaka and means ‘snake umbrella.’ The modern Hindi equivalent sarpchatr has the same meaning. The Bengali word byaner chata means ‘frog/toad umbrella.’ I know of no connection between mushrooms/toadstools and pigs in any Indian language, mythology or folk lore. Thus the theory that the Buddha’s last meal was mushrooms or truffles is without any foundation. All we can say about sukara maddava is that it was some kind of preparation, the contents of which have long ago been forgotten.
The mention of sukara maddava in relation to the Buddha’s death has also led some uninformed people to believe that the Buddha died of food poisoning or even that he was poisoned. I have found this last claim on several Christian web sites. The attraction of the theory that the Buddha was 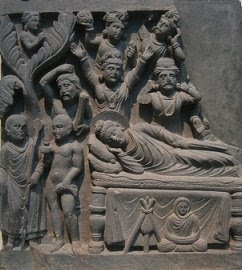 poisoned, at least for some people, it that it suggests something slightly sinister about him or the people around him. Once again, there is no evidence that the Buddha died of food poison or that he was poisoned. The facts as they are presented in the Mahaparinibbana are pretty clear and do not need complex explanations to be understood.
In the months before his passing the Buddha had suffered ‘a severe illness causing him sharp pains as if he were to die’ and which he ‘endured mindfully, fully aware and without complaint’ (D.II,99). He was 80 years old, unusually long-lived for the time, and Ananda described him at this stage as having ‘slack and wrinkled limbs and being stooped’ (S.V,217). He himself said that his body could ‘only be kept going by being patched up’ (D.II,100). Mettanando reads this as the Buddha ‘grumbling about his failing health’, an interpretation which I find completely unwarranted. The Buddha was simply describing his state at that time. After his last meal he had a severe bout of ‘diarrhoea with blood’ (lohita pakkhandika), almost certainly a continuation of the sickness he had been suffering from for some time, and later the next day he passed away. Obviously the Buddha died of the typical complications brought on by exhaustion and the various afflictions that often accompany old age, not because of what he had eaten the day before. The Buddha died of old age and you do not need a CSI lab to come to this conclusion.
Now if we can put aside sukhara maddava, creative forensics and long-distance diagnosis for a while, I would like to draw attention to what I consider to be a more significant fact about the Buddha’s passing. From the point of view of the Dhamma, the most important thing about the Buddha’s last hours is that it demonstrated once again his infinite capacity for compassion. When he realized that the end was near, he immediately thought of Cunda and suspected that he might be blamed for causing his death. To prevent this from happening, he instructed Ananda to return to Cunda's village and tell him that to serve an enlightened one his last meal was a most auspicious and blessed act. Thus, even being sick, exhausted and nearing death the Buddha’s only thought was for the welfare of others.

*Just to pre-empt anyone who might take issue with me on this point – several types of truffles actually do grow in India. The Tuber cabarium is found in Kashmir, the Melanogater durissimus grows in the Kangra Valley and several species of white and black truffles are found in the hills of West Bengal. But all these areas are far beyond the Middle Land where the Buddha lives and it is highly unlikely that they were imported to there or, if they were, that a poor blacksmith would have had access to them. My good friend Anil Sharma tells me that he has never heard of either pigs or dogs being used to find truffles in India. He also informs me that the Indians have never had the passion for their truffles that the French have had for theirs. The Indians are not into subtle flavours – they like pungency, piquancy and peppery hotness.
Posted by Shravasti Dhammika at 11:20 PM

It has become somewhat popular among some teachers and students to say that the Buddha must have died from the large meal. The fact that Ven. Mettanando was a physician and argues for that theory further reinforces that concept.

But I respectfully disagree with Ven. Mettanando and lean more toward Ven. Dhammika's analysis. The Buddha knew that the food was bad, but ate out of compassion and acceptance. He asked the food to be buried. It was not finished.

From the Mahaparanibbana Sutta, Digha Nikaya 16:

19. Thereafter the Blessed One spoke to Cunda, saying: "Whatever, Cunda, is left over of the sukara-maddava, bury that in a pit. For I do not see in all this world, with its gods, Maras, and Brahmas, among the host of ascetics and brahmans, gods and men, anyone who could eat it and entirely digest it except the Tathagata alone."

And Cunda the metalworker answered the Blessed One saying: "So be it, O Lord."And what remained over of the sukara-maddava he buried in a pit.

20. Then he returned to the Blessed One, respectfully greeted him, and sat down at one side. And the Blessed One instructed Cunda the metalworker in the Dhamma, and roused, edified, and gladdened him. After this he rose from his seat and departed.

21. And soon after the Blessed One had eaten the meal provided by Cunda the metalworker, a dire sickness fell upon him, even dysentery, and he suffered sharp and deadly pains. But the Blessed One endured them mindfully, clearly comprehending and unperturbed.

Thank you Bhante - I like your analysis on the mushrooms!

So far all of my fiends from India still would not eat any mushrooms when we go to any non Indian restaurant. Looks like it's the same 2600 years ago!

I beg the ven. Dhammika to bear with me as I'm only a foreigner and English is not my mother tongue, but I fail to grasp the difference between suffering «a severe illness causing him sharp pains as if he were to die», «having 'slack and wrinkled limbs and being stooped'» and having a body that «could only be kept going by being patched up» and dying of old age. To me, Mettanando Bhikkhu is saying the same thing, only in more detail. The things the Buddha described, his previous illness and pains, his decrepit body etc., are the typical symptoms of old age. Old age is not in itself a sickness, it's a general condition that makes one's body more susceptible to many illnesses and causes a general structural weakness. As Mettanando Bhikkhu writes: «Mesenteric infarction is a disease commonly found among elderly people». He agrees the ingredients of his last meal are not what caused his death: «Sukaramaddava, no matter the ingredients or how it was cooked, was not the direct cause of his sudden illness» and: «its author was under the impression that the Buddha died, not because of the food he ate, but because he already had an underlying illness that was serious and acute-and had the same symptoms of the disease that finally killed him.». I really cannot find in your words anything that might disprove Mettanando Bhikkhu's recostruction and diagnosis. The fact that typically «the pain is triggered by a large meal» does not mean the Buddha ate an enormous quantity of food, no more than saying that too strong a physical exercise can cause an elderly person a heart failure means that someone who died of a heart attack was necessarily busy in some physically intensive activity when he died.

If I may hazard a guess gleaned from Japanese sources, Buddha's last meal consisted of a type of fungi or mushroom shaped like a pig's head or snout, hence the mix up between pig and fungus leading to truffles.