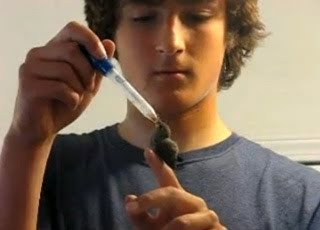 Are animals capable of feeling an affinity with and gratitude towards people? The Jatakas and even some stories from the Tipitaka suggest they do (see http://www.buddhisma2z/content.php?id=481). But of course, they’re just ‘legends.’ However, the evidence ‘on the ground’ suggests they can. Have a look at this rather moving and charming video.
http://www.youtube.com/watch?v=LvrcdQWzH-8
Posted by Shravasti Dhammika at 12:12 AM 3 comments:

During my time in Paris I had ample opportunity to visit quite a few of the museums and monuments the city is famous for. Here are two of the many photos I took. The first is of the frieze above the mail portal of Notre Dame Cathedral. It depicts the Judgment Day. At the bottom the dead push aside their tomb stones as they come to life. Directly above this is an angel and a devil using a pair of scales to weigh the souls of the dead. A smaller devil is trying to pull one arm of the scale down, the more souls to be sent to hell. On the right a grinning devil leads the damned, chained and wailing, to hell. Note that amongst these unlucky souls is a knight, a king, a monk, and a little further along out of the picture, a bishop. On the left of the angel are the saved, crowned in glory and looking up to Jerusalem and above that, to Christ. It is a wonderful piece of sculpture. I could imagine Medieval peasants, tradesmen and burgers going into the cathedral, looking up and seeing the scene, and being filled with both hope and dread. 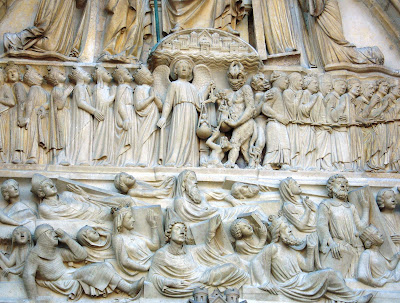 I took this second picture in the Cambodian gallery at Musse Guimet. Rarely have I ever seen artifacts more beautifully organized and presented. Every exhibit was a masterpiece but two that moved me most were these Buddha heads. With what skill and loving care did the Cambodian sculptors capture and then depict the Buddha’s smiling confidence and inner peace. 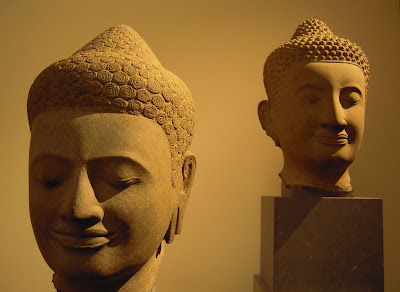 Veils And Veiling - A Buddhist View

A veil (ogunthana) is a piece of cloth used as a covering. Some religions and cultures require women to veil themselves in public, considering it to be a sign of modesty. The Bible says women should veil themselves while in church (1 Corinthians 11, 4-16) and the sheer veil a Western bride wears during her marriage is a leftover of this practice. In most Islamic cultures women must wear a veil to cover their hair or sometimes even their whole face when in public. At the time of the Buddha some women wore a veil although more as an equivalent to a hat than to conceal the face. But

by around the beginning of the first millennium it was starting to be considered appropriate for upper-class women and those in royal households to veil their faces. This was the beginning of what is called purdah, the exclusion of women from public life, a trend that became more widespread in India with the introduction of Islam in the 13th century. Village women in India will still pull their sari over their face in the presence of males not related to them (see picture).
The Lalitavistara, a fanciful biography of the Buddha composed between about the 1st century BCE and the 3rd century CE, has an interesting story pertaining to the issue of female veiling. According to this work, after Yasodhara was selected to become Prince Siddhattha’s wife, people criticized her for not veiling herself in the presence of her father-in-law and mother-in-law. This was taken to be a sign of immodesty and willfulness. The Lalitavistara depicts the young women defending herself in these words. ‘Those who are restrained in body and behavior, measured in speech, with senses controlled, calm and at peace, why should they veil their faces? Even if covered with a thousand veils, if they are shameless and immodest, dishonest and devoid of virtue, they live in this world uncovered and exposed. Even without being veiled if their senses and their minds are well-guarded, they are faithful to one husband, never thinking of another, they shine like the sun and the moon. So why should they veil their faces? The sage reading the minds of others knows my intentions as do the gods know my conduct and virtue, my discipline and my modesty. Therefore why should I veil my face?’
Although this story is apocryphal it is in harmony with the Buddha’s idea that the psychological and the internal are more important than the material and the external.
Posted by Shravasti Dhammika at 1:04 AM 7 comments: