Footprints In The Dust I

The only two of the great religious teachers who were successful during their own lifetimes were the Mohammed and Siddhatta Gotama, the Buddha. Both had long teaching careers and both lived to see their respective religions firmly established. Prof. Basham has written that Buddhism was a minor religion until its adoption and promotion by King Asoka. Basham bases his assumption on the fact that there is no archaeological evidence of Buddhism before Asoka’s time but this seems to me to be a rather weak argument. What physical evidence are wandering ascetics, which are what the Buddha’s disciples were, likely to leave? They established few permanent monasteries and those they did build were made of mud, bamboo and thatch. As for stupas, these did not become an important feature of Buddhist worship until about the 2nd century BCE. The Pali Tipitaka offers ample and convincing evidence that the Buddha was well known throughout wide tracts of northern India and that his Dhamma attracted large numbers of converts from all classes, especially the elite.
The highly critical attitude of Jains and brahmins towards the new teaching as recorded in the Tipitaka suggests that they saw it as a real threat. An important cause of the Buddha’s success was no doubt his extraordinary personality. Even despite the great distance in time between he and us, the heavy editing of the suttas and their rather stilted language, the Buddha’s warm and compassionate presence shines through on nearly every page. The logical consistency of his Dhamma must have been an important factor also. However, no matter how appealing a teacher or how common-sense a teaching it will not attract converts unless they can come into contact with it. The Buddha was a missionary from the very beginning and this was, together with the two things mentioned above, the most important factor in the early succe 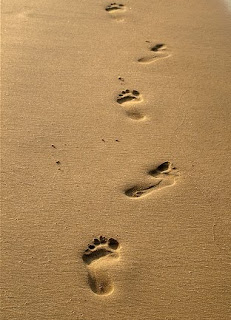 The Meaning Of Life

From the biological perspective the purpose of life is to acquire the necessities for continued existence, to reproduce and to survive. But what about the purpose of life from the religious point of view? If life has a single and specific purpose, as some religions and philosophies claim, then one would expect everybody, sooner or later, to naturally gravitate towards it, discover it and then strive to achieve it. In actual fact, we see that the various religions posit quite different 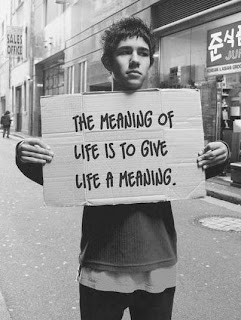 and sometimes contradictory purposes of life. We also notice that many people manage to get through life alright without ever asking or thinking about whether or not life has a meaning. Others take one path, then another, according to circumstance, embrace each one, and manage to get through. We see yet others who claim that what they believe has ‘given their life meaning’ but later we here they have abandoned it for something else. This suggests very strongly that beyond the biological, life does not have any innate purpose or meaning.
From the Buddhist point of view, this is a good thing - it means that we have the freedom and the possibility to give our life the meaning that we want. If we decide to make the accumulation of wealth or power the purpose of our life, then it will become so. If we decide to make the pursuit of pleasure, dedication to our family or the contemplation of the divine the purpose of our life, then it will become so. Whenever one of his disciples attained enlightenment and became an arahat, the Buddha would always say that he or she had `done what had to be done' (S.III,68). From this we can deduce that for the Buddha, the meaning, the purpose and the fulfillment of life is to attain the joy and freedom of enlightenment.
Posted by Shravasti Dhammika at 3:48 PM 7 comments:

The Dhamma In Decline?

Recently the statistics for Singapore’s 2010 censes were released. For local Buddhists they make sad but perhaps not surprising reading. In the 10 years between 2000 and 2010 the number of Buddhists dropped from 42.5% to 33.3%. A further breakdown of the figures also showed that the older a person was and the lower their education standard the more likely they are to be Buddhist. During the same period Christianity in the republic grew from 14.6% to 18.3% and the younger a person is and the better educated, the more likely they are to be Christian. The same was true for those who described themselves as having no religion. They grew from 14.8% to 17%. The trend is clear. Even having no religion is a better option that Buddhism. Sorry to say statistics from Korea, Hong Kong and Taiwan show a similar trend. Buddhism is failing to speak to young, well-educated, modern people. A visit to a good number of temples and Buddhist societies will show the reasons for this trend; commercialized spirituality, absence of Dhamma education, lack of social engagement, poor leadership, etc. The almost complete absence of networking between Buddhists also doesn’t help either. ‘You do your thing. I’ll do mine’ is the norm for Buddhist groups, temples and organizations. In contrast to this Christian churches in Singapore (and everywhere else in Asia) are dynamic, socially engages, highly motivated and well-organized. Their outreach strategies are also highly effective, although some would describe them as intrusive and aggressive as well. Nonetheless, they bring in the converts. Trying to find out about Dhamma from the average Buddhist rarely works because they rarely know any. Temples and societies emphasise ritual activities rather than solid Dhamma education. During the 1980s the decline of Buddhism slowed somewhat probably because of the introduction of religious knowledge in schools. This meant that a generation of nominally Buddhist kids got from school what they never got from the temple – some basic knowledge of the Dhamma. 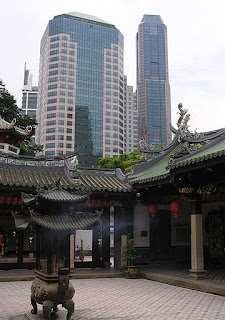 Of course the recent statistics could be read from another perspective. It is actually likely that there are more ‘real’ Buddhists (‘real’ in the sense that they are more than just nominal Buddhists) today than there were in 2000. It may be that nominal Buddhists are simply defining themselves differently, as non-religious or as Taoists. Whatever the case, there is no room for complacency, although I suspect that the complacency will persist.
Posted by Shravasti Dhammika at 8:23 PM 37 comments:

This is a rather interesting video on a rather unusual subject. For the realization and then the admission that one is wrong there has to be at least a few moments of doubt. Doubt (vicikiccha) is usually thought of only as a hindrance (nivarana) by we Buddhists. But it is worth reminding oneself of these words of the Buddha in the Kalama Sutta. ‘Uncertainty is good, it is good to doubt. Uncertainty (should) arise in doubtful matters’ (A.I,189). Anyway, enjoy the video.
http://blogmyway.org/videos/2011/04/28/kathryn-schulz-wrong/
Posted by Shravasti Dhammika at 4:29 PM 1 comment:

An Unusual And Moving Story

BUFFALO, New York. Identical twins Julian and Adrian Riester were born seconds apart 92 years ago. They died hours apart this week. The brothers were also brothers in the Roman Catholic Order of Friars Minor. Professed friars for 65 years, they spent much of that time working together at St. Bonaventure University, doing carpentry work, gardening and driving visitors to and from the airport and around town. "It was fun to see them, just quiet, gentle souls," Yvonne Peace, who worked at the St. Bonaventure Friary for nearly 21 years, said Friday. They died Wednesday at St. Anthony Hospital in St. Petersburg, Flo 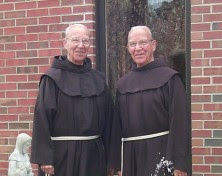 rida, Brother Julian in the morning and Brother Adrian in the evening. Both died of heart failure, said Father James Toal, guardian of St. Anthony Friary in St. Petersburg, where the inseparable twins lived since moving from western New York in 2008. "It really is almost a poetic ending to the remarkable story of their lives," St. Bonaventure spokesman Tom Missel said. "Stunning when you hear it, but hardly surprising given that they did almost everything together." Julian and Adrian Riester were born Jerome and Irving on March 27, 1919, to a couple who already had five daughters. They took the names of saints upon their ordination in the Catholic Church. "Dad was a doctor and he said a prayer for a boy," Adrian once said, according to St. Bonaventure. "The Lord fooled him and sent two." After attending St. Joseph's Collegiate Institute, the brothers were turned away by the military because of their eyesight, the university said. One had a bad left eye, the other a bad right eye. Eventually they joined the friars of Holy Name Province in New York City. They received separate assignments before reuniting at the seminary at St. Bonaventure from 1951 to 1956. After serving parishes in Buffalo for 17 years, they returned to St. Bonaventure in 1973 and spent the next 35 years there. They had separate rooms in the friary but one telephone extension that rang into both, Peace recalled. It was usually the more talkative Adrian who answered, though Julian possessed a quiet authority. They never said who was born first." Brother Julian was like the big brother. Brother Adrian would defer to him," Peace said. Funeral services are scheduled for Monday at St. Mary Our Lady of Grace Church in St. Petersburg. Afterward, the brothers' bodies will be flown to Buffalo and buried Wednesday at St. Bonaventure Cemetery, across the street from the university.
Posted by Shravasti Dhammika at 4:49 AM No comments: