Although they are unlikely to have ever read it, most people probably know that the Ramayana is one of the two great Indian epics and is considered a sacred texts by Hindus. It tells the story of Rama and Sita, their exile and their triumphant return. What most people do not know is that there is no single texts called the Ramayana but many of them. The most well-known is the one composed by Valmiki in 24,000 verses. This is considered the Ramayana, the standard one, the one by which all the others are judged. But there is no good reason for doing this other than that Valmiki’s Ramayana is the most widely known version in northern India, that its contents are the most detailed and interesting and that its language is exceptional. Valmiki used an earlier Ramayana, perhaps several of them, as the basis of his own great work. Some of the other versions of the Ramayana are the so-called Southern, the Western and the North-Western Recensions. Then of course there is the Jain Ramayana, which other than following the rough outline of Valmiki’s is an entirely independent work. The Thai Ramayana differs greatly from the Indonesian one, not just in what it says but in its story line, and both are very different from Valmiki’s. And when I say different, I mean really different. In one version Ravana not Rama is the hero. In some versions Sita is Rama’s sister, not his wife. The Malay Ramayana, Hikayat Seri Rama, and the Lao version, Phra Lak Phra Lam, make Lakshmana the hero an 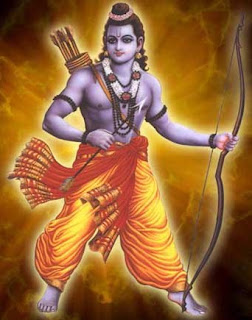 d Rama his sidekick.
None of this detracts from the Ramayana’s, or more correctly, the Ramayanas, importance, their influence has been enormous. They have left their mark on nearly every aspect of Indian life. Tulsi Das’ rendering would easily be the most widely read book ever written in Hindi. It could be plausibly argued that the Indonesian Ramayana has had more influence on that country’s art, sculpture, architecture and literature than Islam has had. And Thailand? Go to Wat Phra Keo, the most important Buddhist temple in the country, and it is not the life of the Buddha that is depicted on the walls of the passageway around the main shrine but scenes from the Thai Ramayana, the Ramakien. The former capital of Thailand was named Ayodhya, after Rama’s home town, not Kapilavatthu. All kings of the present ruling dynasty of Thailand take the throne name Rama, not Siddhattha, Suddhodana or even Buddhadasa. What the Bible is to Europe, the Ramayanas have been to India and wide areas of South-east Asia.
Now this is a Buddhist blog so what am I doing going on about the Ramayana? Well, here is another fact that I suspect you didn’t know. The earliest version of the great epic is the Buddhist one, the one found in the Jatakas (No 461). It’s called the Dasaratha Jataka, Dasaratha being of course the name of Rama’s father. Now although the Dasaratha Jataka is immediately identifiable as a version of the Ramayana it differs greatly from most other versions. For example, Rama and Sita are siblings, not husband and wife; Dasaratha does not banish them but sends them away to protect them from their jealous step-mother; they are exiled to the Himalayas, not to Dandaka in the Deccan; there is no reference to Lanka or Ravana; Rama and Sita return to Benares not to Ayodhya after their exile, and somewhat uncomfortably, they then marry.
Now reading Valmiki’s Ramayana, and I confess to not having read it all, one discovers little bits of Buddhism popping up here and there throughout it. For example, the story of King Sibi giving his eyes to the blind man (Jataka No 499) is there. I strongly suspect that the exile of Vessantra as told in the Vessantra Jataka (No 549) was the inspiration for Rama and Sita’s exile in Valmiki’s Ramayana, although I don’t know what scholars say about this. Having said all this, it is also true to say that the Dasaratha Jataka is not a literary masterpiece and Valmiki’s Ramayana definitely is. It is nowhere near as long (is any poem?), it lacks its narrative charm and excitement, and its didactic elements are much more limited. If you are interested in reading the Ramayana (and you have 6 month to spare) have a look at http://www.valmikiramayan.net/ where you will find the Sanskrit text and a word by word translation of it with notes.
Posted by Shravasti Dhammika at 7:18 PM 9 comments:

Dialogue With The Devil

Walter Kaufmann was one of America's most famous philosophers and I became a fan of his years ago. I was first introduced to his writings by Venerable Nyanaponika who had a great appreciation for him also. He had all Kaufmann's books and with his characteristic generosity lent them to me. Kaufmann was the one of the very few academics at that time who actually read the Tipitaka instead of the then often unreliable secondary literature. He knew the Tipitaka through Neumann's lyrical German translations. As a result, Kaufmann was able to write authoritatively about the Dhamma and he often did. In his brilliant Critique of Religion and Philosophy (1958) Kaufmann has an amusing and insightful fictitious dialogue between Satan and an atheist. I reproduce a small part of it here.

Atheist: You look so content. Have you grilled another theologian for breakfast? Or did you heat up a Christian for your lunch?
Satan: Both, my friend.

Atheist: I have often wondered how you catch Buddhists. After all, they do not believe the sort of thing Christians believe, so you can't undermine their faith.

Satan: I get them to fall out of love with the world.

Atheist: By dangling beautiful women in front of ascetics?

Satan: Not necessarily. Their aim is to fall out of love with the world. I try to show them that suffering is worthwhile.

Atheist: That’s what I said; women.

Satan: That works only with the least interesting cases. The others I try to interest in some cause, some task, some mission. I may even persuade them to spread their knowledge to as many men as possible. As soon as I have kindled some ambition I generally do not find it too hard to involve men in all sorts of compromises. But there are other ways.

Satan: Sometimes I try to lead then from detachment into callousness and indifference to the suffering of others. But that only works in the early stages. Once a Buddhist has developed his particular detached compassion he represents one of the hardest cases I know.
Posted by Shravasti Dhammika at 5:41 PM 3 comments: