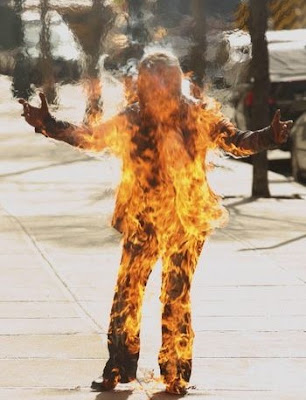 Before dismissing this curious ability as just a belief  of the time which was included in the Tipitaka but which has no basis in reality, I would like to posit a few ideas. Several of the psychic powers (iddhi) mentioned in the Tipitaka might be within the realm of possibility, except for New Agers for who all of them are. I am thinking of being able to read the minds of others and hear or sense things over a long distance. Most of us have had the experience of suddenly thinking of someone we haven’t thought of for a long while and shortly after have the phone  ring and find it is them, or  receive a letter from them. I have never been able to do this at will but it has happened to me spontaneously, and quite a few times. Could it be that all of us have these powers but that they are usually smothered by the clutter of the ordinary mind  and that disciplined meditation allows them to occur more frequently? And is it possible that with an enlightened mind one can do such things at will, or at least some people can?
Anyone with a ghoulish sense of curiosity will know at least something about spontaneous human combustion (SHC), a strange and creepy phenomena where  individuals suddenly bursts into flames. Forensic scientists and psychic researchers have tried to give rational explanations for this phenomena although few of them are very convincing (see Wikipedia article Spontaneous Human Combustion). Could something like this become available to highly developed individuals so that they can  manifest it at will?  Or is it as I said above just one of several fanciful ideas that have made their way into the Tipitaka?
Posted by Shravasti Dhammika at 11:32 PM 5 comments: