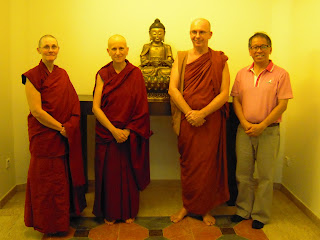 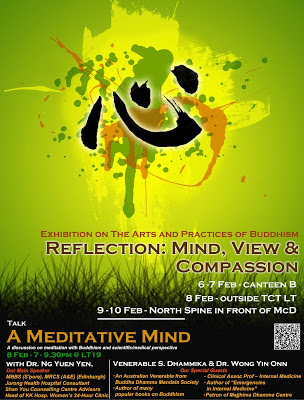 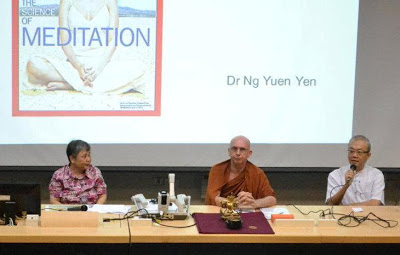 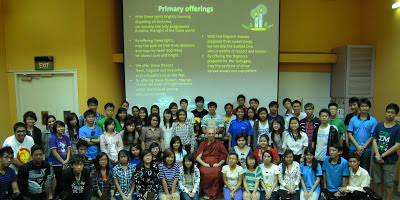 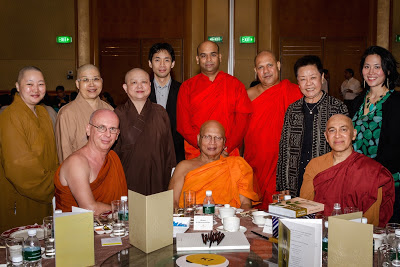 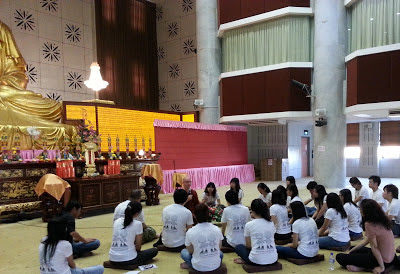 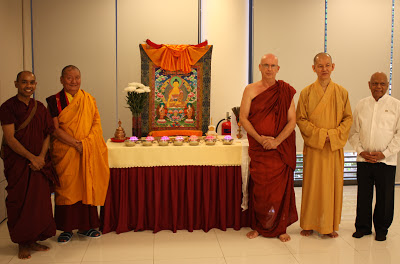 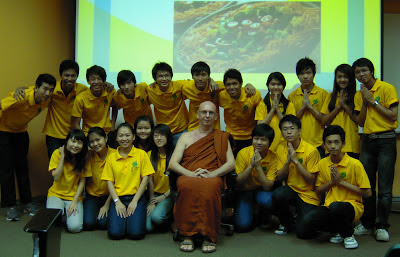 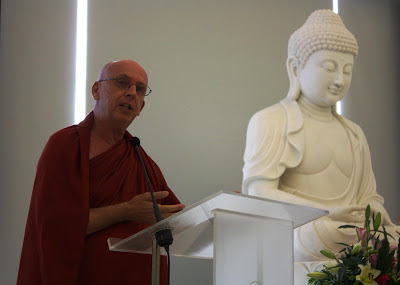 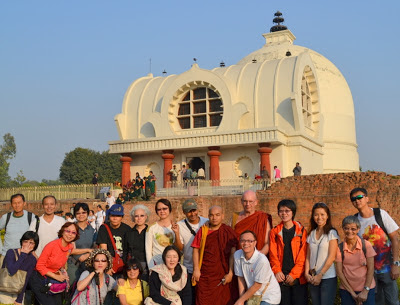 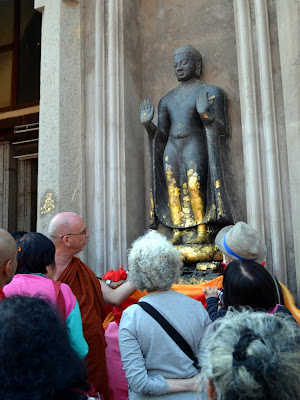 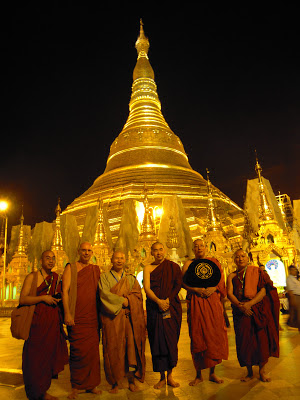 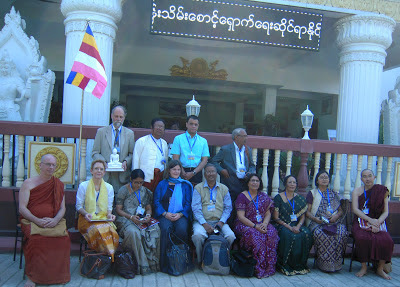 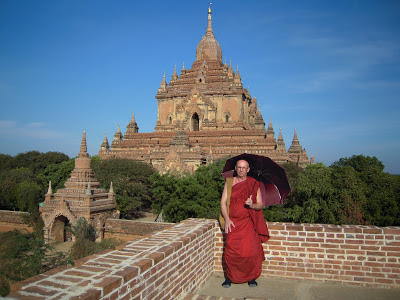 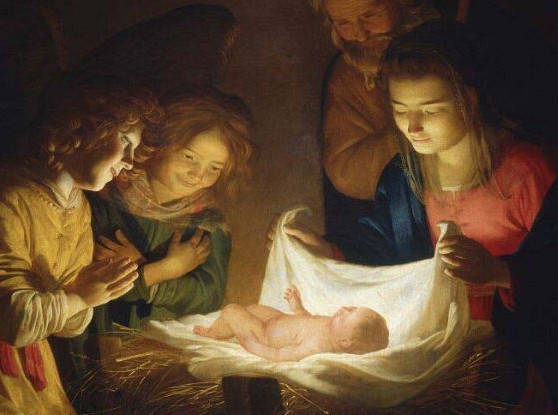 A happy Christmas to all my readers.
Posted by Shravasti Dhammika at 3:22 PM 2 comments: 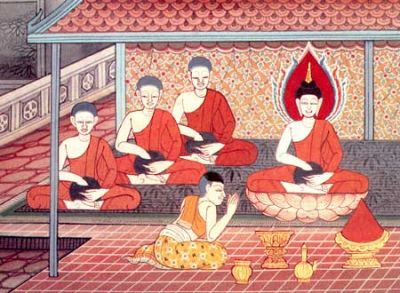 
While acknowledging that the matter is obscure and unlikely ever be settled, the general consensus amongst scholars is that sukara maddava  may have been some kind of pork dish. Partisans of vegetarianism vehemently deny this and insist that it was truffles or mushrooms or at least not meat. Those who mistakenly think that vegetarianism was an integral part of early Buddhism jump to the conclusion that the Buddha was contradicting his own teachings by eating meat, and accuse the truffle/mushroom party of denying the obvious and trying to perpetuate a cover-up. Religious zealots intent on replacing Buddhism with their own faith prefer the ‘Buddha was poisoned’ scenario as it introduces a sinister aspect into the Buddha’s life and mission. All we can say with certainty is that sukara maddava was some kind of culinary preparation, the ingredients of which have long ago been forgotten.
Now let’s just look at the facts. In the months before his passing the Buddha had suffered  “a severe illness causing him sharp pains as if he were to die”  and which he “endured mindfully, fully aware and without complaint.”  (Digha Nikaya II,99). This took place during the monsoon when even in India today water-born diseases are very common. The Buddha was 80 years old, unusually long-lived for the time, and Ananda  described him at this stage as having  “slack and wrinkled limbs and being stooped.”  (Samyutta Nikaya V,217). He himself said that his body could  “only be kept going by being patched up.”  (Digha  Nikaya II,100). After his last meal, he had a severe bout of “diarrhea with blood” (lohita pakkhandika), a continuation of the sickness he had been suffering from for some time, and later the next day he passed away. Obviously the Buddha died of the typical complications brought on by exhaustion, sickness and old age, not because of what he had eaten the day before. This more sound conclusion was still current when the Milindapanha was written (2nd century BCE – 1st century CE). It says; “It was not from the food that the Lord became sick. It was because of the natural weakness of his body and the completion of his lifespan that the sickness grew worse.” (Milindapanha 175).
From the Buddhist perspective the only significance of the Buddha’s last meal is that it demonstrated once again his infinite capacity for compassion.  When he realized that the end was near, he immediately thought that Cunda might be blamed for causing his death. To prevent this from happening he instructed  Ananda to return to Cunda’s village and tell him that to serve an enlightened one his last meal was a most auspicious and blessed act. Thus, even being sick, exhausted and nearing death the Buddha’s only thought was for the welfare of others.
This is the last of my posts on Buddhism and vegetarianism. I am leaving for India tomorrow and will post again after Christmas.
Posted by Shravasti Dhammika at 2:45 PM 4 comments:

Meat Eating; Was The Buddha Inconsistent?


Here is a quandary to consider. We saw before that a causal link can be discerned between eating meat and animals being killed. Nowadays there are many persons between these two points - the slaughter man, the meat packers, the distributors, etc. but in either its simplest or its most complex form the three key participants are (1) the slaughter man, the one who actually draws the knife across the animals throat; (2) the middleman who sells the meat and (3) the customer, the person who buys and consumes the meat. The existence of these three depends on each other.
Now it is obvious why the Buddha mentioned slaughter men, hunters, deer stalkers, fishermen, executioners, etc. as those who do not practice Dhamma (Samyutta Nikaya II,256). It is also clear enough why he described people who sell meat as failing to practice Right Livelihood (Anguttara Nikaya III,208). But curiously, nowhere does the Buddha complete what seems to be the logical sequence by mentioning the third and last link in the chain, the buyer/eater. Why is this? If killing an animal is wrong and if selling its meat is wrong, why isn’t buying and consuming its meat wrong too?
Here is another quandary. The Buddha said that his lay disciples should avoid making their living by five trades; these being trade in weapons (sattha), in human beings (satta), in meat (mamsa), in alcohol (majja) and in poisons (visa, Anguttara Nikaya III.208). Although this seems clear enough, looking at it a little more carefully might reveal something relevant to the question of meat eating. Why are these trades wrong, unwholesome or kammicly negative? Let’s have a look at arms.

While the blacksmith is forging steel to make a sword he is unlikely to have any evil intentions, he is probably preoccupied with forging his steel and he certainly does not kill anyone. The arms dealer who sells the sword does not kill anyone either. He’s just selling a commodity. So why did the Buddha consider arms manufacturing/trading to be a wrong means of livelihood? Obviously because weapons, like poisons make killing possible. Their main purpose, indeed their only purpose, is to kill. The arms dealer is centrally situated in a chain that could lead to someone being killed, even though he himself does not kill anyone. A, arms manufacturer - B, arms dealer - C, purchaser and killing. Now if we reverse this sequence and apply it to meat eating then surely the same conclusion would have to be drawn; C - eating meat - B, meat seller  - A, slaughter man and killing. Why in both these cases has the Buddha left out one or two of the key links in these chains?
Posted by Shravasti Dhammika at 4:01 PM 25 comments:


Being true to the Dhamma in general and the first Precept in particular, would seem to require being vegetarian. Not everyone sees it this way and most Theravadin and nearly all Vajrayanist Buddhists do not interpret it as being so. We will now examine the motives in practising the Precepts and see how this could be relevant to the meat eating-vegetarian issue.
The Buddha gave three reasons why we should take ethical discipline seriously:
(1) The first is to avoid the negative effects of bad actions – usually called ‘bad kamma’ but more correctly ‘bad vipaka’. This is mentioned by the Buddha many times and is the only one of the three that is ever mentioned in traditional Theravada teaching, giving rise, with some justification, to the criticism that Theravada is self-centered.
(2) The second reason is because following the Precepts lays the foundation for positive qualities like restraint, awareness, mental clarity, the happiness of having a clear conscience (anavajja sukha, Digha Nikaya I,70), etc. and which in time lead to the ultimate good, Nirvana.
(3) And the third reason is love and concern for others. I do not harm or kill others because I respect  their life. I don’t steal from them because I respect their property. I don’t sexually exploit or misuse them because I respect their dignity and their right to choose. I do not lie to them because I respect their right to receive and know the truth. And I do not intoxicate myself with alcohol because when I encounter others I want meaningful communication to take place between us. In short, fidelity to the Precepts is as much as anything an act of love, not just to the person I am directly relating to but to the wider community as well.
The Buddha highlighted this point when he said that right actions are a type of consideration or thoughtfulness (saraniya) to others that lead to “love, respect, kind regard, harmony and peace”, (piyakarana garukarana sangahaya avivadaya samaggiya…, Anguttara Nikaya III,289). Just so that there can be no uncertainty about what the Buddha said here, piya = love; karana = making, causing; garu = respect, esteem; sangaha, sympathy, togetherness, mutuality; avivada = non-dispute, harmony; samagga = peace, concord.
Those who feel that they can develop good qualities like patience, determination, mindfulness, generosity, kindness and love while eating meat should have no concern about their diet. But, anyone who genuinely feels that they should develop an expansive love and kindness towards others - all others (and the Buddha said we should), would have to feel uneasy about being connected in any way to the animals being killed. The knowledge that they are part of a chain that leads to some very nasty things happening (and I do not want to regale you with the horrors of the abattoirs) must make them feel uneasy. It would have to motivate a thoughtful Buddhist to try to do at least something about this cruelty; and the least one could do is not be a link in the chain, by abstaining from eating meat.

I will continue the discussion in the next post.
Posted by Shravasti Dhammika at 12:18 AM 2 comments: