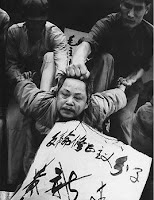 A member of the Chinese Communist Party learning about politics.

The Olympics
China says that the Olympic Games should not be about politics. I’m just a simple monk and I’ve probably got it all wrong but I always thought that Communism says that everything is political – history, art, social relations, education, economics, work, and especially in China, what you say and even what you think. They also insist that no one should interfere in the internal affairs of other countries. Again, I’m just a simple monk but as I recall, throughout the 50’s, 60’s and 70’s China financed and encouraged Communist insurgencies in Thailand, Malaya, Indonesia, the Philippines, Cambodia and a few other places. But probably my memory is faulty. They keep saying that Tibet is a part of the sacred Chinese motherland and never under any circumstances will they compromise on this matter. But the documents of the Communist Party of China show that from the very beginning two of the Party’s agendas were to ‘liberate’ Tibet and Mongolia. After the founding of the People’s Republic in 1949 Stalin told Mao in no uncertain terms to drop the Mongolia ‘liberation’ thing and he did. But there can be no doubt that all those documents were forged by ‘hostile outside forces.’ I have always found Mao’s famous saying that Ladakh, Nepal, Sikkim, Bhutan and what is now Arunchal Pradesh are ‘five fingers on the hand of China.’ really quite catchy. I can’t understand why such a memorable little saying doesn’t get much of an airing nowadays. But then I’m just a sim 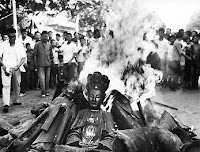 Patriotic Chinese protecting their priceless cultural heritage with guidance from the Party.
Posted by Shravasti Dhammika at 4:34 AM

Then I must say, from a simple layman point of view, the Tibetans are the greatest political players.

Gathering and abusing the sympathy the people felt from them through the help of western media.