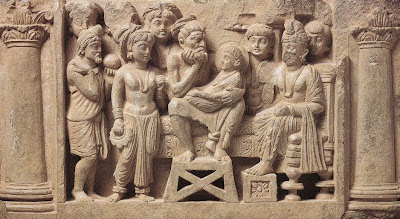 Asita, also known as Kanhasiri, was a sage who lived in the forest in the Sakyan country. He is described as wearing matted hair (Sn.689). One day he noticed that the gods were wildly celebrating and he asked them why they were so happy. They replied, ‘A Bodhisattva, an excellent and incomparable jewel, has been born in the Sakyan town in Lumbini, for the welfare and happiness of the human world. This is why we are so happy.’(Sn.683). Anxious to see this child Asita went to Kapilavastu where Suddhodana welcomed him and gave him the child to hold. Being accomplished in the art of ‘signs and mantras’ (lakkhana mantra, Sn.690) he examined the baby and proclaimed that he would ‘attain complete enlightenment’ (Sambodhi), reach the ultimate purified vision’ (paramavisuddhidassi), and proclaim the Truth ‘out of compassion of the many’ (bahujamhitanukampii, Sn.693). Then tears welled up into his eyes. Noticing this and being worried by it, the Sakyans asked Asita if he had foreseen some misfortune in the boy’s future. He replied that he was sad because he knew that he would pass away before this all happened (Sn.694).
The name Asita literally means ‘not clinging’ while Kanhasiri means 'dark splendour'.
This is the only mention of Asita in the Tipitaka. According to some scholars the story about him is purely legendary and it may be. However, there is little in it that is inherently fantastic or unbelievable. It would have been quite common in ancient India for a monarch to invite a local holy man to bless and perhaps name his new-born son. Likewise, it would be normal for the holy man to ‘predict’ that the king’s son would grow up to be a great man.
Later re-tellings of the Asita story, and there are many of them, each more detailed and elaborate than the earlier ones, often say that Asita predicted than the baby prince would become either a universal monarch (cakkavattin) or a fully enlightened sage (Buddha). This ‘either or’ prediction is absent from the Tipitaka story.
Posted by Shravasti Dhammika at 4:00 PM