During my first visit to Tibet I missed it. In fact, I couldn’t find anyone who had even heard of it. So before my most recent trip I did all the required research about Atisa’s tomb and even that proved more difficult than I had expected. Gyurme Dorje’s popular Tibet Handbook has much to say about the nearby Nyetang Dolma Lhakhang but is silent about the tomb. Most other guidebooks proved to be equally unhelpful. Nonetheless, I eventually found it. Nyetang Dolma Lhakhang is on the main road about 20 miles out of Lhasa heading west and it seems most tourists stop to have a look at it judging by the large car park in front. If you cross the road and walk down a dusty track for about half a mile you come to a small, rather shabby village not far from the banks of the Kyi Chu River. Locals stared opened-mouthed at us but when I said I would like to see ‘Jowo Jey’ someone ran off to get the key and on his return we entered what looked like a very ancient but recently renovated temple. There, in the middle of the main hall, was a large stupa, drum-shaped on a high square base – the actual tomb of one of the last great Indian Buddhist pandits and the man who had an critically important role to pay in the revival and spread of Buddhism in Tibet during the 11th century. 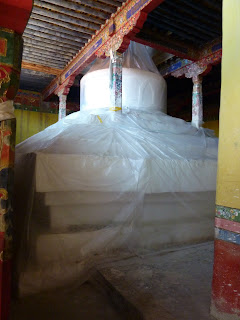 Atisa is still lauded in Tibet, his works are still studied but his tomb is neglected and little-known. Sir Charles Bell’s The Religion of Tibet has a photo of the tomb as it appeared in the 1920s (page 58) but even at that time, as he attests, it was rarely visited. At that time the drum of the tomb was painted, as the old photo shows. Now it has been recently whitewashed and is covered with plastic, apparently to protect it from water leaking through the roof. During the height of the Cultural Revolution it is said the Bangladesh Government quietly let the Chinese know that they would appreciate it if the tomb was not destroyed, Atisa still being famous in that country. I and my companions circumambulated the tomb and then chanted the Metta Sutta in honor of this remarkable son of the Buddha.
Posted by Shravasti Dhammika at 7:30 PM

May I suggest you investigate the authenticity of a document when you go to Tibet in the future: Life of Saint Issa.

From your blog posting, I know you considered it a myth. But no harm trying. At least the Jesus Sutra of China is an authentic document.

I would suggest you to first check when did Buddhism arrived in Tibet and compared it to the Jesus life time.

Well, Buddhism never arrived in Tibet bacause Tibet was non-existence, according to the Chinese.
Ok, my apology for being cynical.

1. The theory says he went to India, not Tibet.

2. The document is alleged to be in Hemis Monastery, Ladakh. Not really Tibet.

3. The claimed is that the document was seen by Notovich and others in Hemis. I doubt any claimed on its authorship or date of composition has been made. I don't see anything wrong for a library to housed documents which are older than itself.

4. The existence of the document is one thing, whether what it says is true, is another.

By the way, the Jesus Sutra manuscript has been dated to the 7th century.