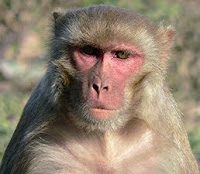 The tortoise, having heard the Bodhisattva’s words and pleased with his reasoning, let go of the monkey’s dick. The moment the monkey was free, he bowed to the Bodhisattva, then ran away so fast he didn’t even look back. The tortoise worshiped the Bodhisattva and returned to his own place. As for the Bodhisattva, without ever having fallen from the jhanas, he eventually passed away and was reborn in the Brahma world. Jataka No 273
Posted by Shravasti Dhammika at 6:22 PM

Thanks to Aesop, in the West we think of tortoises as ponderously slow, but that tortoise in the tale was certainly quick to bite that monkey's dick!

Thanks Venerable, this really made me laugh!

You know in other areas of the Buddhist canon there are stories which make you howl with laughter.

I was shocked when I was reading the Dharmagupta Vinaya and came across the part where a certain bhiksu fed his leftovers to a female monkey and then got close enough to grab it. He proceeded to rape it, but then as time went on he established a mutually beneficial relationship with the money by giving it food and receiving sexual favours. The other bhiksu saw this and, confused, reported it to the Buddha who laid down the law and said bestiality is likewise prohibited.

Makes you wonder who was part of the early sangha... Still, that made me laugh.

Interesting cast of characters and their names. Kondanna was the first awakened one after Buddha's very first sermon. And Kassapa was one of the greatest disciples of Buddha who became Maha Kashyapa in Mahayana Buddhism. I think it added spice to this already quite spicy story. very funny!

Translation of Jataka No. 273 from "The Jātaka or Stories of the Buddha's Former Births" by E.B. Cowell (editor)

Dear Kamleong,
If you have a more careful look at Jataka 273 on the link you have given you will notice that it is in Latin. So like I said, I think this Jataka has not been translated into English before.

yes, bhante. it is indeed in Latin :)

I happen to have an old copy of Cowell's Volume I & II (1990 reprint by Munshiram Manoharlal, New Delhi; someone left it in a local temple in Penang, together with "A Guide to Buddhism A to Z", where I picked that up last year). I have not yet finish reading them. I will certainly be puzzled by that Latin translation, if you have not mentioned that in this post.

Below is another web site that has the Cowell's edition.

p.s. I also very much enjoy reading your "A Guide to Buddhism A to Z". Somehow all these are connected indeed.

by the way, I just found that there had been a long discussion about translating this Jataka back in 2008 at http://dir.groups.yahoo.com/group/Pali/message/12375

It was mentioned that John Garrett Jones, "Tales and Teachings of the Buddha" 1979:194 f (Appendix)deals specifically with just this Jataka.

I'm having a dilemma illustrated in the story below that I would like to ask you for guidance. It may not related to this story.

Suppose there was a person who stood at the rim of the rooftop (being foolish or just being in a wrong place). He was there, minding his own business. Then, without provocation, another person ran into him, trying to push him over with an intention to hurt him. However, the first person, with quick reflex, just stepped aside to avoid the collision. The second person couldn't stop his momentum, fell and broke his leg.

1. By stepping aside, does the first person commit a bad karmic action ? If he didn't step aside, he would fall instead of the second person. And, he knew that the second person would definitely get hurt if he stepped aside.

2. If the first person only gave the second person a pat on shoulder which made him off balance and fell. The pat constitutes only 1% of the moving force. Would the karmic consequence be as bad as using 100% of force to throw second person ?

Thank you for reading. I'm looking forward to hear your answer.

Dear Virgin, if you remember that intention (cetana) is kamma you should be able to answer the question for yourself. What was the first person’s intention? What was the second man’s? And although it is not specifically mentioned by the Buddha, we are probably being safe to say that the intensity of one’s intention would correspond to the strength of the kammic consequence (vipaka). However, I do think that the Buddhist fixation of wanting to know the exact kammic consequences of every conceivable (in this case hypothetical) situation may miss the point. Do good because it is the right thing to do. Shun evil because it is the right thing to do.

Venerable Sir,
Actually there is a translation of this Jataka tale published in "The Jataks: Birth Stories of the Bodhisatta" translated from Pali by Sarah Shaw - 2006 New Delhi Penguin Books. I have a copy of it. Very funny story. Thanks anyway for reminding me about it.
Best Wishes!
Ciprian Salagean

rashi gemstone
your lucky gems according to Moon sign. Recommendation of a jyotish gemstone just by one parameter like Moon sign gives very average results. We welcome you to Gemstoneuniverse