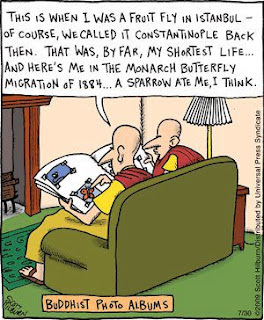 Posted by Shravasti Dhammika at 2:11 AM

Did you hear about this one?

During the civil wars in feudal Japan, an invading army would quickly sweep into a town and take control. In one particular village, everyone fled just before the army arrived - everyone except the Zen master. Curious about this old fellow, the general went to the temple to see for himself what kind of man this master was. When he wasn't treated with the deference and submissiveness to which he was accustomed, the general burst into anger. "You fool," he shouted as he reached for his sword, "don't you realize you are standing before a man who could run you through without blinking an eye!" But despite the threat, the master seemed unmoved. "And do you realize," the master replied calmly, "that you are standing before a man who can be run through without blinking an eye?"

Good one. So many New Age gurus talk of being this or that famous person in history. How come no one claims to be a bed bug or gnat in some remote place? There are far more animals, fish, sea mammals, birds, reptiles, and insects than humans. The Buddha recognized this and said human birth is rare.