Reading the suttas is always interesting, in as much as  they show how little we humans have changed in some ways over the centuries, how little of what we do is actually new. Recently I was reading the Chaddanta Jataka (Ja.V,45-7). This charming story is interesting in itself but of extra interest is its detailed description of a mountain-climbing expedition. Mountain climbing is little more than two centuries old while rock-climbing has only become a recognized sport/activity in the last few decades. Reading the Chaddanta Jataka shows  that  people were  doing both, although not as a recreation, as far back as   the 5th or  3rd  century BCE. Very briefly, the Chaddanta Jataka tells of a man who undertakes to go to a remote mountain wilderness to kill a miraculous elephant and bring back its tusks for a queen. Knowing that he will have to ascend extremely difficult mountains he prepares himself well. A list of the equipment he takes includes a knife (vasi), hatchet (pharasu), spade (kuddala), a sharp instrument for cutting bamboo (nikhadanamutthika velu),  grass-cutter (gumbaccheda),  metal rod (lohadanda), iron grappling hooks  (ayasinghataka),  pegs or bolts (khanu), hammer (muggara), leather ropes (cammayotta), webbing (varatta), elephant boots (hatthiupahana) and most interestingly, a leather parachute or glider (cammachatta). He also took his own firewood and barley meal, perhaps a type of energy food. Everything was carried in a leather (waterproof ?) pack (cammabhasta). The first part of his journey is taken by chariot, then his porters help carry his gear until he gets the uninhabited forest after which he proceeded alone. The text describes how he cuts his way through  a thick  forest,  improvises a  raft  out of a log and a ladder (nisseni) out of bamboo to cross difficult terrain until he  reaches the foot of the mountain. Then tying the rope to the grappling  hook he threw it onto the rock, secured it and began his assent.  Using the diamond-tipped iron rod he drilled holes in the rock, hammered pegs into them and climbed up on them.  On reaching the first peak he let himself down the other side with the rope, ‘like a spider letting out its web’ (makkata sutta vissajjana karena). Getting to a cliff or gorge he waited for ‘a gust of wind and then taking his parachute (or glider) he glided down like a bird’ (vatan gahapetva sakuno viya otaratiti). In this way he climbed over six mountain ranges until he got to where the elephant was. One can only assume that these details, so precise and realistic, are based on actual mountain climbing expeditions that really took place. Perhaps they reflect early attempts by Indians to penetrate into the Himalayas and eventually beyond them  to the Tibetan Plateau. 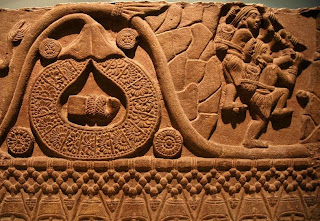 One final thing. In the National Museum in New Delhi there is a fragment of the railing from the great Buddhist stupa at Bharhut dating from about the 2nd century BCE. On it is a depiction of two men climbing a rock  face by grasping and standing on pegs protruding from the rock. The railing of the Bharhut stupa illustrates numerous Jataka stories but I have long pondered over which one this scene is ment to be. The caption below the railing says it shows honey gatherers, which is quite plausible. Indian villagers and forest-dwellers do gather wild honey still in a way not unlike the scene on the railing  (See Eric Valli’s Honey Gathers in Nepal). The problem is that there is no Jataka story which includes an episode of honey gathering. So I am inclined to think it is meant to illustrate the mountain climbing episode from the Chaddanta Jataka. There are problems with this identification. The Jataka tells of   one mountaineer but here there are two, and his pack was made of leather while here the packs look more like cane. Nonetheless, if the two men are not gathering honey what are they doing? Any comments, including from mountain climbers or rock climbers would be welcome.
Posted by Shravasti Dhammika at 12:45 AM

If they were not gathering honey, then they were each other's honey! wahahahaha

The honey gatherer: "I once remember an old lady who for the past twenty-five years was gathering honey to send to Ramana Maharshi. On every occasion she was unable to bring the honey herself and had to send it with someone. After waiting for twenty-five years, she finally found the opportunity to come. The old lady was in tattered clothes, standing before Ramana. Her eyesight was poor and I still vividly recall the unusual way she looked at Sri Bhagavan, calling out "Oh Darling, where are you? I want to see you." Bhagavan in all his graciousness said, "Grandmother, look this way. I am here." Looking at the honey she had brought with her, he said to me, "They are Brahmins, they won't eat this. We will share it, and eat it."

It is often said, Ramana did not give direct Upadesa (spiritual teaching), but what else is all this? Although the Maharshi repeatedly pointed out human frailty, people were not prepared to rectify themselves. As if talking to himself, he looked at this poor old woman in ragged clothes and said, "Poor lady, she must be hungry. And where will she go for clothes? Who will offer her food and clothes?" Upon hearing this, a devotee got up and said, "We will give her food and also see that some clothes are purchased." Then they took the woman to the Dining Hall and fed her sumptuously. He also sent someone to town to buy her a sari. As the old woman had no money, she had walked a great distance to come here. Ramana knowing this, said in an impersonal way, "Would anyone be interested in getting her a bus ticket?" A devotee again came forward and said, "We will provide her with a bus ticket and see her off." When this lady returned from the Dining Hall she was touching the ground, and then touching her eyes. That is a way of prostration and thanksgiving.

It is noteworthy that whenever the poor or untouchables came, Ramana took a very personal interest in them, which was a moving sight to see"

An interesting read, Bhante. Here in Austria, there is a town called Hallstatt built on the side of a mountain where they have been mining salt for up to 7000 years. 7000 years ago people where scaling the mountain and burrowing deep into it's interior to gather the salt rocks. I suppose they too must have used ropes and such to use for "rock climbing" and "caving". They might have even used some of those rivers and waterfalls for a bit of "canyoning" too!

Do we know what happened to that unfortunate elephant?

Dear PeterAtLarge,
The elephant (the Bodhisattva) allowed his tusks to be cut off but perished soon afterwards of his wounds, the queen got her tusks but then died of remorse on hearing of the elephant death, and of the hunter’s fate we hear nothing. The commentary says the hunter became Devadatta in a later life.

Couldn't we suppose that the carving referred to something that would have been familiar at the time? There is a "portrait" of King Ashoka himself on an elephant holding relics on the Bharhut railings in the Indian Museum, so this might be a shared story from the period which we have no other knowledge of.