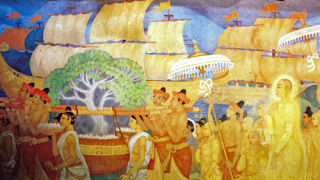 As the ordination of woman requires a quorum of both monks and nuns, Mahinda sent a message back to India requesting Sanghamitta to lead a group of nuns to Sri Lanka. She arrived with a branch of the Bodhi Tree from Bodh Gaya and later ordained some woman, thus establishing the nuns Sangha outside India for the first time. In the 5th century the nuns Sangha was established in China by nuns from Sri Lanka and thus nuns in that country, in Korea and in Taiwan, now look to Sanghamitta as their founder, although she was unknown in these countries until the 20th century In Sri Lanka the anniversary Sanghamitta's arrival in the island is celebrated every year on the full-moon in December.
Posted by Shravasti Dhammika at 6:58 AM

The image is beautiful,are there others by the same artist?Could you provide a link?

Dear Blogger, the painting is from the Belanvilla Maha Vihara in Colombo in Sri Lanka. I do not know where there are reproductions of the others.

Thank you for your kind reply.