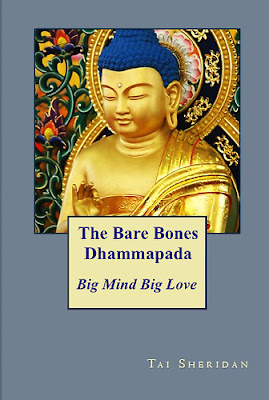 We are being offered yet another version of the Dhammapada, this time not a new translation or even  the more common rehash by someone who knows no Pali of someone else’s rehash who knew no Pali either, but an “interpretation”. According to the blurb on Tai Sheridan’s The Bare Bones Dhammapada, the original text is “burdened by the stylistic and conceptual dust of the early and middle ages” and this new version “strips the Dhammapada of monasticism, literalness, chauvinism, anachronisms, and concepts of evil, shame, and sensual denial. It presents the path of wisdom as universal truths for a contemporary audience of any gender, lifestyle, or spiritual inclination”. No it doesn’t!  All it does is offer cryptic verses, some of which are actually quite poetic, but that in no way reflect either the Buddha’s words or intent.
For example the Buddha of both the Pali Theravada and the Sanskrit Mahayana sutras was disparaging of dancing while Tai Sheridan apparently enjoys it and therefore Dhammapada verse 16 can be rendered as “do good dance joyfully”. Tai loves partying  and is convinced the Buddha did too, hence verse 18 can be rendered as “do good throw a party on the path sing and dance.” All this renders the Dhammapada unfamiliar to anyone who knows it. What is very familiar about The Bare Bones Dhammapada is the assumption underlying it:  “I happen to believe in and like (fill in the gap) and that’s what the Buddha taught.”
Hemmingway’s comment on punctuation could apply equally well to translating or even paraphrasing other peoples work, especially classics such as the Dhammapada.   “My attitude toward punctuation is that it ought to be as conventional as possible. The game of golf would lose a good deal if croquet mallets and billiard cues were allowed on the putting green. You ought to be able to show that you can do it a good deal better than anyone else with the regular tools before you have a license to bring in your own improvements.”

Posted by Shravasti Dhammika at 1:08 AM

Bhante, welcome back after long silence! I enjoy every of your posts, but this one is especially funny, due to the comic book you kind of review. Metta!

Thank you very much for bringing our attention to this work. To be honest, I'm quite horrified to read the brief synopsis offered in your blog (as well as on the Amazon page for the book), as it confirms a serious concern about the state and fate of Buddhism in the West. However, it also brings forth much gratitude for the small, but growing, western monastic Sangha. dedicated to the Word of the Buddha, and fidelity to the ancient texts. Thank you for your efforts. With much mettā...

Dear Chang Liang, thanks for the link. The video about the monk who went to hell and came back to tell about it has been doing the rounds of the internet for some time. It is of course a hoax, and a rather clumsy one. He’s supposedly anxious to convince everyone that his experience was real but we get no pictures of him, no address of his monastery, no pictures of him nowadays; nothing but rather ridiculous claims and no proof of them. In 1012 Dr. Eben Alexander, a neuroscientist, wrote a book in which he claimed to have died, gone to heaven and returned to life again. He was not claiming to have had a near-death experience, but to have actually died. The book is called “Proof of Heaven”. It attracted a great deal of attention even beyond religious circles only because its author is a neurosurgeon, i.e. a medical professional. Needless to say nearly all other medical professionals have panned the book, pointing the many exaggerated claims and misunderstandings about brain functioning in it. Interestingly, there is even a book panning the book from a Christian perspective; see “A Christian Rebuttal of Proof of Heaven” by R. A. King. More seriously, it has emerged that Eben Alexander has not been particularly honest in some aspects of his professional life. He had been dismissed from his hospital for being unprofessional, he has been sued several times for malpractice and he has been accused of tampering with medical records. But at least Alexander is a real person. No solid evidence has been presented to prove that the monk who supposedly went to hell even exists. But let us be clear, according to the Buddha there is a heaven and hell (or more correctly a purgatory) but the descriptions of them in the video and by Alexander are ridiculous, naive and childish. Readers please note - this particular blog post is about “The Bare Bones Dhammapada”. Let’s keep the comments to this subject.

Thanks, Bhante, for this honest review! We are studying the Dhammapada in our meditation group, and one night a woman read some of the verses from this version that she'd downloaded on her Kindle. They were so off the mark that it was comical! But I see that this author has several other books free for download on Amazon, and I shudder to think of folks new to Buddhism reading this malarkey and thinking that it's the true Dhamma.

That's a good one, too. Being honest about what is in the scriptures. So that we can see where the Buddha is incompatible with most humans - because they also love to dance and know about the good feeling that may come from it. It tells us that we cannot follow any wise guy in each and every aspect, that even an enlightened one has flaws.