In the Mahāvaccagotta Sutta the Buddha mentioned that he had many thousands of disciples, a good number of whom had attained one or another of the stages leading to enlightenment (M.I,490-2). However, his first disciples were the merchants Tapussa and Bhallika. During the fourth week the Buddha was staying at Uruvela, Bodh Gaya’s original name, Tapussa and Bhallika happened to pass the outskirts of the village and saw the Buddha quietly meditating there. Impressed his serene looks and the aura of peace around him they approached him and offered him a bowl of barley gruel and  honey balls. When the Buddha had finished eating the two merchants asked if they could take refuge in him and his Dhamma. They did not take refuge in the Sangha because it had not yet been established yet (Vin.I,4). The  Tipitaka contains very little other information about these two individuals. In the  Anguttara Nikaya the Buddha describes Tapussa as ‘the first person to take Refuge’ (A.I,26) and in the  Theragatha   there is a verse by a Bhallika, although it is not certain if this is the same person as the second of the two merchants (Th.7).
Perhaps because of the dearth of information about Tapussa and Bhallika many legends  grew up around them. When the Chinese pilgrim Hiuen Tsiang was in northern Afghanistan in the 7th century he visited two towns each claiming to be the merchant’s hometowns and each named after them. Near each town was a  stupa supposedly enshrining relics given to  the two  by the Buddha. From about the 5th century CE Sri Lankans have claimed Tapussa and Bhallika as their own. At Tiriyaya on the north-east coast of  Sri Lanka is a beautiful stupa supposedly built by the two merchants and enshrining a hair given to them by the Buddha. On the other hand, the Burmese insist that Tapussa and Bhallika were from their country. The great Shwedagon Pagoda in Rangoon contains, Burmese legend says,  strands of hair  that the Buddha gave the two merchants. However, the Vinaya says that the two merchants came from Ukkala which most historians identify as being somewhere in Orissa. Archaeology  has  pretty much confirmed this. An inscription in early Brahmi (cira 1st  cent. BCE)   found in the ruins of a stupa at Jaipur in Orissa mentions a gift made by Tapussa. Another inscription, equally as old, on Deuli Hill near Puri, also in Orissa, mentions the name Bhallika. Close by are the remains of a huge stupa. The picture is of this inscription. 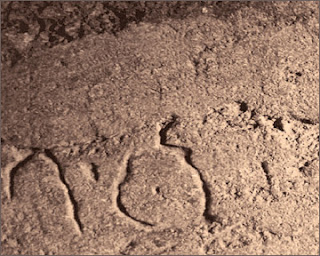 Posted by Shravasti Dhammika at 3:03 PM

Thank you for this post, Bhante. A timely reminder for me and a penny for my thoughts.