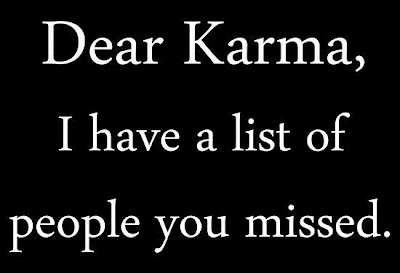 Collective Karma all sounds a little bit "Old Testament" or Islamic to me and for all the reasons you mentioned. These ideas of collective Karma and Vipaka also drag into focus another fairly unprofitable view, namely fatalism. Fate is regarded as pernicious wrong view in quite a number of Buddhist sources including the Udana. (can't remember the exact verse source) Almost as likely as the old story,rehashed for the 04' Tsunami about the hapless individual swept out to sea, clinging to a log of wood that later turns out to be a crocodile. I guess Mme. Blavatsky et al would have us belive that in a previous life the man saved the crocodile (born at that time as a human being) from being drowned. I read an historic book about the Krakatoa eruption in the 1870's which created similar tsunamis and lo, the story of the crocodile log was there as well. What's that?... Jonah he lived in a Whale?

It's an interesting concept. While I'm not as familiar with other traditions, Theravada generally focuses on the individual aspects of kamma since the vast majority of the teachings in the Pali Canon deal with actions on an individual level (e.g., AN 5.57, MN 61, MN 136, etc.). That said, there is one section at the beginning of DN 16, dealing with the "the growth of the Vajjis," that seems to allude to a type of collective kamma at a 'national' level.

The subject of collective kamma bothers me for a number of reasons, though. It's not that I think it's impossible for there to be a concentration of individual kammic results in one place, due to the combined actions of a cohesive whole, such as from the citizens of a country. I think it's a valid frame of reference. But even so, I still tend to view them as individual actions with individual results that are, or least appear to be, similar (i.e., nations don't have intentions, the citizens of those nation do).

Furthermore, the idea of collective kamma bothers me when people use it unskillfully, e.g., when people harbour intense guilt for actions that they themselves didn't commit, and then end up creating more suffering for themselves by cultivating unwholesome mental states in the belief that they're somehow responsible, perhaps out of a desire to be punished or something.

I think that if people use the idea of collective kamma in a skillful way, such as being more active in their country's politics to help steer public policy, giving humanitarian aide, etc., it can be a good thing that helps to lessen suffering all around. But given the tendency of people to harbour guilt in numerous and often unwholesome ways, I feel that the idea of collective kamma can do more harm than good, such as leading to taking on the 'weight of the world' when what we really want to do is cast our burdens aside.

I think if we view the teachings on kamma as teachings about personal responsibility, that our actions not only affect ourselves but those around us, then we're on the right track. When it comes to carrying the guilt of other's misdeeds, however, I think that's a self-imposed burden that we needn't bear. We can't change the past, we can only control how we act right here, right now; and I believe using the past as a lesson in how not to make the same mistakes is sufficient.

Dear Jason, thanks for your comments. I do not think the Buddha’s statement about the Vajjins prospering or declining was meant to suggests collective kamma, any more than someone does when they say “China is on the rise” or “America is declining.” Both are generally accepted modes of speech ways about the generalities of situations. Neither imply that the speaker believes in a particular metaphysical concept. However, there is one example (a story) from the Theravada tradition that does very strongly imply collective kamma. I am waiting to see if any of my readers mentions it. If they do I will give my comments on it. You mention that you would not object to using the idea of collective kamma “in a skilful way”. If by this you mean that a false ideas can be promoted and hailed if it can help bring about a desired goal, I have no opinion on that. My post did not address the question the ‘usefulness” or otherwise of the collective kamma idea, although generally I think most of its implications would be negative. My post is primarily whether collective kamma accords with the Buddha’s Dhamma, and my conclusion is that it does not.

I agree with you that there is no collective kamma. Additionally, it invites speculation on kamma and nothing wholesome can come of that. The 'evidence' the supporters have for collective kamma is flimsy at best.

No, I didn't mean that a false idea can be useful, although I suppose that's possible. What I meant was that one can look at the idea of collective kamma in a way that's valid and can help motive people to be more socially engaged in their community/society. In the passage I was referring to, for example, the Buddha asks Ananda if the Vajjis as whole do certain things (which are arguably skillful), and after Ananda answers yes, the Buddha states that, "So long, Ananda, as this is the case, the growth of the Vajjis is to be expected, not their decline." The Buddha doesn't call it collective kamma, of course, but I think the general principle is there.

The original collective actions of our distant ancestors kept our species alive under very difficult circumstances. We developed social systems to offset the limitations of individuals and at no point in our history have we abandoned that basic rubric, under which all sorts of permutations are now possible, given our large numbers. We're now unavoidably social creatures.

We also live in a physical universe that has an established law of kamma, whether or not it's recognized by us. Kamma as it manifests as action-reaction or cause and effect. The elements, whether the earth, air, fire, and water elements that the Buddha referred to or hydrogen, helium, etc., that we know today can combine in various ways and influence each other depending on the combinations involved. But earth remains earth regardless of its combination with other elements, hydrogen remains hydrogen, etc. otherwise they would lose their elemental properties. In the same way we can react to and be influenced by other humans but the notion that the law of cause and effect, whereby I reap the rewards or suffer the consequences of my own previous actions, could be subsumed into a larger group is unfounded. I don't see a mechanism by which that would operate, in which I would "lend" my kamma to others, or that they would take over mine. Not in this universe, anyway.

It seems that when the Buddha instructed the Kalamas as a group and said "When you know for yourselves that…" he might have the opportunity to discuss "collective kamma" but in the sutta he then immediately refers to the actions of a "person" as being beneficial or not, as skillful or not.

It seems that the idea of collective kamma is an example of intellectual pandering.

Dear Ariyakumara. Congratulations! This is exactly the thing in Buddhism that I think could be interpreted as an example of collective kamma. I will write something about this and post it on my blog in a few days.

There's another example too, Bhante, that is the story of how 33 youths reborn as devas at Tavatimsa heaven lead by Magha as Sakka. I think this is an example of good collective kamma.

Dear Ariyakumara, please give me the reference for this story.

There r not such things as collective karma. Pls dun bullshit.

Collective karma seems kind of apt to me. Not everybody during the Holocaust/Tsunami died. Some escaped with their lives, others had worse experiences than death - perhaps in accordance to their karma. Perhaps the Germans were creating new karma for themselves. More people were displaced than died during the Tsunami. Don't underestimate the complexity/capability/organization of the universe. We are born in a certain place according to our karma. It kind of makes sense our family members/neighbors/countrymen share a part of our karma - at least to a certain extent. If you have done bad things, you will be be in a bad place. Other people who have done bad things may join you there.