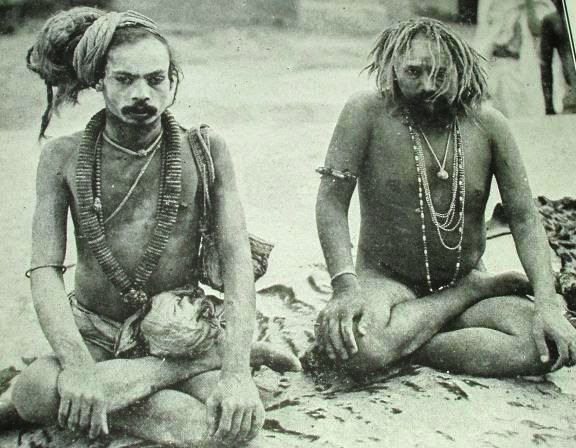 The more things change the more they remain the same! An interesting example of this would be the austerities practiced by some Hindu sadhus and the beliefs that underline them. The belief is that self-inflicted physical stress creates ‘heat’ (tapas) and that this can impart super-normal powers (siddhi). These powers can then be used to attain certain worldly or spiritual goals. The range of austerities is wide but some of them are virtually the same as those practiced by certain ascetics at the time of the Buddha. Laying on beds of thorns (kantapassaya) is mentioned in the Tipitaka (e.g. D.I,167; Ja.III,235)  and is still done today. Once I had to wait hours for a delayed train at Lucknow, and walking around outside the station  I saw a sadhu, naked except for a small genital covering, standing beside a pile of tree branches with long murderous-looking thorns on them. A train came in and as crowds  emerged from the station the sadhu finished the beedi he was smoking and then threw himself onto the thorns. It was one of the most  startling  sights I have ever seen. The  thorns  clearly penetrated his body but apparently caused him  no pain. People tossed small coins at him as they passed.
The bat practice (vaggulivata) is mentioned in the Tipitaka (Ja.I,493; III,235; IV,299) and is still done. It consists of hanging upside-down by a rope for extended periods. Sometimes the practitioner will have  another sadhu push him so he swings back and forward. I have never seen this  being done. Another austerity still  practiced  is the  “five fires”  (Pali pancatapana, Hindi panch agni tapasya) which consists of sitting surrounded by five piles of smouldering dried cow dung. Some sadhus place one of these smouldering piles on their head. I have seen sadhus in Allahabad, at the Girnar Parikrama in Gujarat and elsewhere doing this. Sitting all day under the blazing Indian sun while breathing in the acrid smoke makes this one of the toughest of all austerities.
Many other aspects of Hindu asceticism done today would have been familiar to the Buddha; nakedness, matted hair (jati), extreme fasting, perpetual standing, etc. It is rather extraordinary when you think of it that such  institutions, beliefs and practices could endure for so many centuries. And there is no sign that they are dying out. 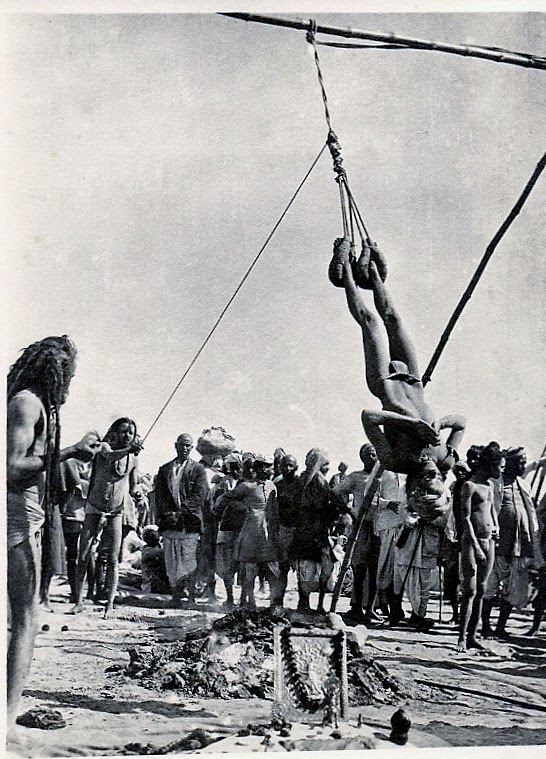 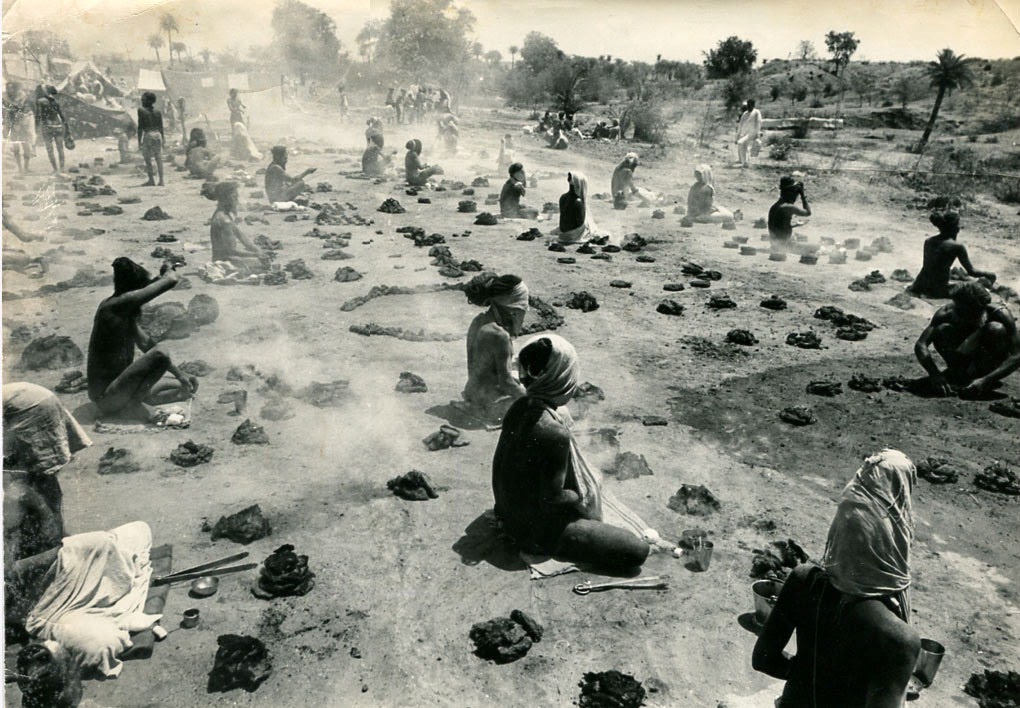 Posted by Shravasti Dhammika at 5:41 PM

I remember reading the book by Herman Hesse called Demian. I also read Siddhartha and Steppenwolf written by him as well. Steppenwolf in my opinion the best of these three. Demian is largely about a young man that is initiated into what can only be termed as Tantra. As I remember Demian's experiences culminated in having some sort of revelation about how overcoming self inflicted pain was synonymous with some kind of ultimate spiritual liberation. Dear Bhante as, you have shown above, the idea of self mortification seems to exert an age old pull on the minds of spiritual seekers past and present. We see that Roman Catholicism has a number of mortifications such as moving up a certain very long flight of Cathedral steps on hands and knees. Muslims have their Eid, where they parade down the street cutting their heads with knives. The list goes on. In terms of Buddhism, The Buddha ,himself practiced at least some of these and found them, at least in terms of overcoming Dukkha, unprofitable. The Buddha made it relatively straightforward to move away from Dukkha and make the goal of our spiritual efforts Nirvana, the cessation of all compounded phenomena, dukkha with it. The Buddha suggested that the following of The Noble Eightfold Path was the way to achieve this. How long it takes to arrive at this worthy goal is unknown, but even the most superficial practice of the Buddha's path, brings worthy results.

It may be more appropriate to answer your question regarding “Virtue” via email but I currently do not have your email address. Please take a look at my blog post titled “Virtue” at http://bit.ly/1sEgGNq.

It's good that you haven't mentioned walking on fire - as it was shown that anyone can do it when using the right "equipment". Isn't it common that all those sadhus take money for their performances? So isn't it just a business, like a magician's? Or has anything helpful been coming out of it - e.g. the perfect diet or the perfect way to resist torture?

If I wanted to explain the wrongness of their doing to a child, I would just put a picture of an ascetic together with one of a survivor of a concentration camp, and compare a dangling sadhu to a Cambodian hung upside down by the Khmer Rouge in Tuol Sleng prison.

The right equipment for walking on fire is Faith. It is easy for educated Buddhists to look down on uneducated Indian Sadhus and forget to notice their own lack of Faith.

To think of Sadhus in terms of "performances" and "take money" is shameful. If you would know some Sadhus, you would admire their Courage and Faith. There are hundreds of different kinds of Sadhus and among them are Men and Women who deserve our deepest respect.

So it isn't faith, firewalking will work without any faith (as good medicine does).

I mostly respect people who work for their living or do their spiritual training hidden in the mountains so that I can be sure that they do not want to show off.

Lord Buddha too lived as a Sadhu.

Sadhus are not all alike. But so are Buddhist Monks, Catholic Priests, Jewish Rabbis and Sufi Qalandars. I was offended by your terms "performance" and "take money". Who of the above religious professionals doesn't "take money" and give "performances"?

The reporters visited a meeting of Indian Sadhus, not the Sadhus a meeting of reporters. After the meeting the Sadhus will return to their various places. Many live in remote caves in the mountains which are dangerous to reach.

There are Sadhus who perform for tourists but they are very few compared to the hundred thousand or more Sadhus who are living in places tourists will never visit.

Not all Sadhus are uneducated and not all are from poor families. There are still young men from wealthy, educated families who leave all to go forth and seek the Truth.

They probably train a lot harder than The author. And the Buddha has trained hard to these before too. Criticizing others is no good.