The Dhamma of Dental Hygiene 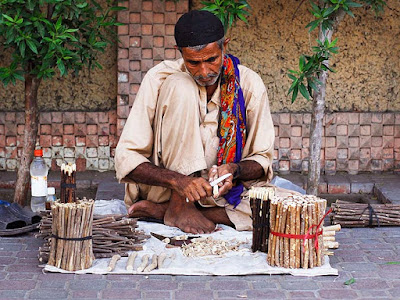 In the Anguttara Nikaya there is a short sutta in which the Buddha describes the benefits of using a tooth stick (dantakaṭṭha), the ancient Indian equivalent to our tooth brush. The advantages of regular brushing, the Buddha said, include that it is that it is good for the eyes, the breath does not have a bad smell, the taste buds are cleaned, bile and phlegm do not mix with the food, and food becomes more palatable (A.III,250). In my book Nature and the Environment in Early Buddhism I tried to identify the tree or trees that might have been used to make these tooth sticks, but without success. I conjectured  that   they were probably  Streblus asper and Salvadora persica both now  called the Toothbrush Tree, Azadirachta indica or Neem, and  (Acacia Arabica i.e. Babul, mainly because village people in Bihar and Uttar Pradesh use them today.
The monk Yijing who was  in India in the 7th century and  on his  return to China wrote an account of his trip, advised his readers to follow Indian dental hygiene practices. He wrote: ‘The shortest (tooth stick) is not less than eight finger-lengths long, resembling the little finger in size. Chew one end of the wood well and then brush the teeth with it…After having used the wood for brushing the teeth, split and bend it and scrap the tongue…A thin flat piece of bamboo or wood, the size of the surface of the little finger and sharpened at one end, may be used as a toothpick to clean broken teeth…Twigs of a bitter, astringent, or pungent taste, the end of which may become cotton-like after being chewed are best for using as tooth wood…Toothache is almost unknown in India because the people there use tooth wood.’ While Yijing was quite detailed about how to use a tooth stick he did not mention what wood they were made of.
Interestingly, the Mahisasaka Vinaya lists the trees that should not be used as tooth sticks without mentioning which should be.  Those  to be avoided are Toxicodendron vernicifluun, Bassia  latafolia (Pali madhuka), Ficus religiosa  (Pali assattha, the Bodhi Tree) and two others called dushu and saka, the identification of which are unclear. But just recently I discovered that the Susruta Samhita (circa 2nd cent. BCE to 2nd cent CE) has a section on oral hygiene and mentions four types of wood that can be used for tooth sticks – they are Neem (Pali nimba), Acacia catechu (Pali khadira), Bassia latafolia (Pali madhuka) and Pongamia galbra (Pali karanja). Neem is widely used in India today and probably was during the Buddha’s time too.
Posted by Shravasti Dhammika at 4:50 AM

We've heard Neem called the pharmacy of India and we really like our Neem toothpaste.


Back in the 70s while visiting rural parts of Tamil Nadu (in India) I remember using neem sticks just as described in the article. Most homes though had 'tooth powder' the most popular brand being "Gopal Pal(tooth) Podi(powder)" Then there was Colgate tooth powder which was more expensive. You put the powder on the palm of one hand and used the forefinger of the other as the 'brush'. The 'brush' had to be frequently dipped in the powder. There was hardly anyone using toothpaste.


In the 80s when my dad worked for the telephone company (then called the Post and Telegraphs Department) in Coimbatore he volunteered to plant about 250 trees in the area around the staff living quarters. The planting part was relatively easy. He got the nearby 'Forest College' who had a nursery to supply the saplings. Maintaining the saplings was the hard part.
Children would damage them while playing. So he ended up naming each tree after a child who lived nearby. That worked. The kids were so proud. In fact parents started complaining that the kids were using up all the water in the house to water 'their' tree.
Roaming goats and cows were a more serious problem. So tree guards were installed.
But the biggest threat? Some adults who broke the twigs of neem trees so they
could use a 'herbal all natural' throwaway tooth brush!

Very informative. Thanks for sharing.

Great blog, Thanks for sharing such great post with us.
Dentist in Navi Mumbai

Hello There. I found your blog using msn. This is an extremely well written article. I will be sure to bookmark it and return to read more of your useful information. Thanks for the post. I’ll certainly comeback. Invisalign Northampton


We tried to get pregnant for a few years in a local clinic. There were no results. We've tried everything possible but nothing. We were recommended to use eggs. I know we have to go abroad. I was terrified. I didn't know where to go and where to begin my search. When my friend recommended Dr Itua to me from western Africa I thought she was joking. I knew nothing about that country but I know they have powerful gifts on herbal medicines and I was afraid because of the language barrier. Anyway, she convinced me to give it a try. She told me that Dr Itua can also cure my prostate cancer which gives me more motivation to give a try to Dr Itua herbal center medicines. I've done the research and thought that maybe this really is a good idea. Dr Itua has reasonable prices. I ordered two four bottles and I drank it as instructed and everything went well. My prostate cancer is gone. Also it has high rates of successful treatments. Plus it uses natural herbs. Well I should say I was convinced. We contacted Dr Itua and now we can say it was the best decision in our lives. We were trying for so long to have a child and suddenly it all looked so simple. Dr Itua was so confident and hopeful he projected those feelings on me too. I am so happy to be a mother and eternally thankful to Dr Itua herbal Cure . Don’t be afraid and just do it!
Dr Itua can cure the following diseases: Sickle Cell,Hiv,Herpes,Shingles, Hepatitis B,Liver Inflammatory,Diabetes,Fibroid,Parkinson's,Alzheimer’s disease,Bechet’s disease,Crohn’s disease,Lupus,Hpv,Weak Erection,Infertility,fibromyalgia,Chronic Diarrhea,Get Your Ex Back,Als,SYPHILIS,Cancer,Autism,Genetic disease,Epilepsy, Parkinson's disease, Doctor Itua Contact Email: drituaherbalcenter@gmail.com Or Whats-App Chat : +2348149277967