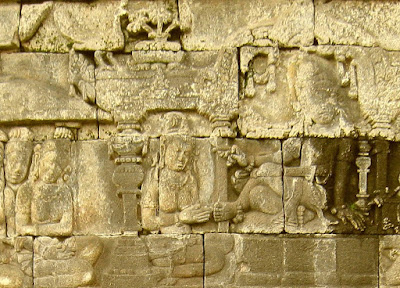 The Lalitavistara is one of the earliest attempts to write a biography of the Buddha although it only goes up to the First Teaching. It is in highly ornate Sanskrit and is full of fantastic details, in stark contrast to Asvaghosa’s much more sober Buddhacarita.  The Lalitavistara  is an important work for the history of Indian literature although it tells us little of any historical importance about the life of the Buddha. It does nonetheless contain several interesting details about society at the time it was composed, probably between the 1st century BC and the 2nd century CE. To me, one of the most interesting such detail is to be found in chapter twelve, which recounts Prince Siddhattha’s first encounter with Yasodhara, there called Gopa. Meeting her and being attracted to her he gave her his finger ring (anguliya). Apparently this was how a man, at least a high status man, expressed his wish to marry a woman at this time.  Thus the giving of a ring would be equivalent to our engagement. The accompanying picture is of this episode as depicted on the great Borobudur temple/stupa in Java.
Finger and toe rings  were used in India centuries before the Buddha.  One whole chapter  in volume II of Sir John Marshall’s Taxila (1951) concerns  rings found during excavations at the famous site. In a footnote  Marshall  says that the Dulva (Tibetan translation of one of the the Vinayas)  allows  monks  to wear rings  made of base metals but not gold or silver.  I have not been able to verify this but if monks in later centuries did wear rings they would have been signet  rings; used to seal letters and documents and verify the writer’s identity.
Wedding and engagement rings go back a long way in history. The Egyptians and the Romans used wedding rings. They were discouraged in Christendom  for centuries because of their association with Roman paganism. That  changed after 860 when Pope Gregory the Great decreed that as proof of nuptial intent the man had to give a ring to the woman. Thereafter  engagement and wedding rings started to became common although conservative Protestants still shunned  them, indeed all jewellery, well into the 19th century – i.e. the first Methodists, Mennonites, the early American Baptists, Seventh-day Adventists, the more strict Pentecostals, etc. Most of these sects have now given in to popular culture although I think Jehovah Witnesses, the Brethren and a few others  still  will not use wedding rings.
Other than the Lalitavistara I have not been able to find any ancient Indian source   mentioning  the giving or exchanging of rings. Does anyone know of any? If so I’d be delighted to hear from you. The picture above is from Anandajoti Bhikkhu’s
http://www.photodharma.net/Indonesia/05-Lalitavistara/05-Lalitavistara.htm
Posted by Shravasti Dhammika at 5:08 PM