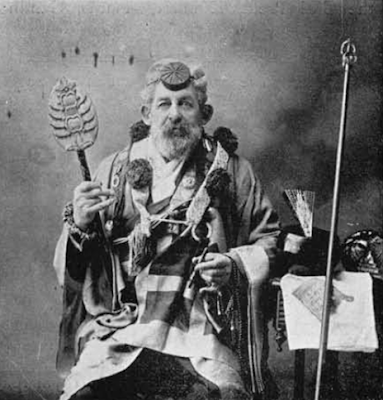 Charles Pfoundes was born 1840 in Waterford in Ireland in 1840 to Protestant parents who had been bankrupted during the great famine of 1845-50. Immigrating alone to Australia in 1854 he joined the colonial navy and later captained a Siamese ship and ever after usually prefixed his name with Captain. He came into contact with Buddhism first in Thailand and seems to have been fascinated by it. His travels led him to Japan in 1863 where, having quickly learned   the language he worked as a shipping agent, as a policeman in Nagasaki, a mediator between the Japanese government and foreign diplomats and later as a newspaper columnist. He returned to Europe in 1878 via the US, married, worked at various jobs.  On his return to Japan 10 years later without his wife he ordained as a priest in Kobe. Throughout the 1870 the Meiji   government pressured monks to marry in the belief that it would weaken Buddhism and aid the modernization the country, and many monks gave into this pressure. Thus most Japanese monks became and remain today technically priests rather than monks. Pfoundes died in Kobe in 1907 at the age of 67.
In the early 1880s a group of internationally minded Buddhists in Kyoto founded an organization called the Japanese Buddhist Propagation Society (Kaihai Senkyokai). They believed that their religion could have a universal appeal if efforts were made to disseminate more widely. Perhaps they also hoped that if the Japanese government, not well disposed to Buddhism at the time, saw Westerners taking an interest in the Dhamma it might change their   attitude towards it. Pfoundes was asked to organize and lead the mission to London and between 1889 and 1892 he did with a good deal of success. The JBPS had picked an opportune time to start its mission. Gilbert & Sullivan’s Japanese-themed and hugely successful opera The Mikado had just finished as had the Japanese Village exhibition in Knightsbridge, and all things Japanese were becoming very fashionable.
In London and elsewhere in the UK Pfoundes’ lectures were well attended as he was apparently a convincing and interesting speaker. A photograph of him from this time shows him in the full regalia of a Japanese prelate, accoutrements that must have increased his authority and made him appear even more interesting. Newspaper reports of the time show that Pfoundes’ two main subjects were Buddhist doctrine and criticisms of Theosophy, which he dismissed as nonsense masquerading as Buddhism.
In 1883 the Theosophist  A. P. Sinnet had published his book Esoteric Buddhism which became and remains even today a seminal text of Theosophy. Sinnett claimed that his book was the gist of “psychic communication” he had had with Mahatma Koot Hoomi, one of the supposed “Great White Masters” in the Himalayas. It should be kept in mind that the general public at the time knew little of genuine Buddhism and Madam Blavatsky and Sinnett’s “esoteric Buddhism”, actually a mish-mash of late Victorian spiritualism and occultism with a smattering of Buddhism and Hinduism, was attracting  interest. In his lectures, Pfoundes made it clear that Buddhism and Theosophy had little in common. Numerous notices from newspaper sand journals of the time show that he was determined to clarify Buddhism and distinguish it from Theosophy.
Stratford, Enterprise Hall, Great Eastern Road. Sun. December 6th, at 7, Captain Pfoundes, ‘Theosophy: Its frauds and follies.’
Progressive Association, Penton Hall, 81 Pentonville Rd, Sun December 13th at 7, Captain Pfoundes, ‘Theosophy:  Is it true? – An exposé of a dangerous fallacy.’
Progressive Association, Penton Hall, 81 Pentonville Rd,–January 31st, at 7, Captain Pfoundes, ‘Buddhism not Theosophy: the two critically contrasted’, preceded by vocal and instrumental music.’
However, on several occasions Pfoundes went beyond criticizing Theosophy to pointing out the dubious background and behaviour of some of its leaders; calling Madam Blavatsky a charlatan, Sinnett either delusional or a liar, and Charles Webster Leadbeater a pederast. He   was sued for libel and had to settled out of court for 550 Pounds.
Having said this, it is right to point out that while the early Theosophists had a confused understanding of the Buddha’s Dhamma, that the “Great White Masters” in the Himalayas were non-existent, and that Blavatsky and Leadbeater were shadowy characters, they had a   significant role to play in the revival of Buddhism in Ceylon and elsewhere. They also stimulated and energised the independence movements in various Asian countries. However, their “esoteric” Buddhism owed almost everything to Blavatsky and Sinnett’s fanciful claims and almost nothing to the Buddha. Even Colonel Olcott, as he learned more about genuine Dhamma during his stay in Ceylon, quietly distanced himself from Madam Blavatsky and her followers.
So it is that the first Buddhist mission to the West after King Asoka’s of about 256 BCE   was conceived by Japanese and led by a Westerner, Captain Charles Pfoundes.
Posted by Shravasti Dhammika at 3:42 PM