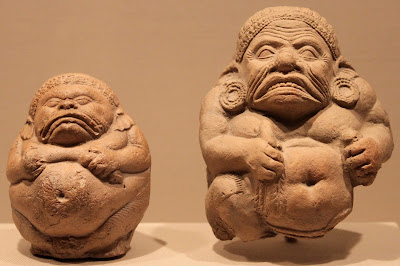 Spirit or demonic possession, āvisati or gahita in Pāli, is a situation where one or more malevolent supernatural beings are believed to forcibly inhabit and control a person. Possession and exorcism, the countering of such supernatural forces, is reported from most religions and not just primitive ones either. Exorcism was a major part of Jesus’ mission and according to the Bible he exorcised nearly 30 people and gave his disciples the permission and the power to do the same. Being able to ‘cast out demons’ was asserted to be proof of the Gospel by the early Christians and even by some Christian sects today.
The reality of  possession was taken for granted during the Buddha’s time and the non-human being (āmanussa) that did it were regarded as ‘fierce, terrible and horrifying’ (D.III,203). Someone possessed would cry out in alarm: ‘This spirit has seized me, possessed me, harmed and hurt me, and will not let me go!’ (D.III,204). One of the very few examples in the Tipiṭaka of someone being possessed concerns a man named Sānu (S.I,208 ff). And I can find no example of the Buddha or any of his monks preforming an exorcism. However, the Tipiṭaka does include quite a few incidents where Māra or various yakkhas (see picture above) tried to terrify, tempt, threaten or harm the Buddha or some of his disciples (e.g. S.I,207). In all such cases the attempts failed as soon as the intended victim recognized who or what was behind the attack. When the Buddha was attacked as soon as he recognized who was responsible for it, Māra would ‘disappear then and there, sad and disappointed’ (e.g. S.I,104). Perhaps this could be interpreted to mean that as soon as the real cause of a supposed possession is recognized (i.e. hysteria, psychosis, schizophrenia or sometimes even epilepsy) it can be cured, or at least there is a possibility of a cure.
Posted by Shravasti Dhammika at 4:20 AM

Hello! My name is Juan, I´m from Colombia. For years I have been following Buddha Dhamma. But in my country doesn't exist a Buddhist Sangha, for that reason i feel my buddhist way far away from Arhat... I must to give up :(

Can you help me with some Buddhist Lessons? For example how to meditate and achieve a Jhana?

In the Abhidharmakosa of Vasubandhu, chapter on Karma, the text mentions five causes, other than karma-results, that can cause a troubled mind. This is like a minor footnote almost, although it is crucially important for the whole theory of karma. In these five there are: demons, disturbance of the elements, fear and terror. Some of these are rather obscure, why fear? What is terror as distinct from fear? Is there some special sense for fear in the Buddhist Abhidharma? Anyway, this means that demons can harass you, and it is not necessarily a result of karma. Does fear imply bandits, thiefs, kings, tax-collectors, and wild animals etc ? What is behind it in the ancient Indian thinking?
Demons are accepted in Abhidharmakosa as forces that are not necessarily the result of one's karma. Any comments on this?

Dear Yashas, thanks for the interesting comment and the question. I am not an expert in the Abhidharmakosa but I do know that as Bu Indian Buddhism proceeded it picked up more and more popular superstitions and incorporated them into itself. This may be The example you give looks like it might be a manifestation of this sort of thing. In the Pali suttas there is nothing like this. An interesting study of popular superstitions creeping into Buddhism is Robert DeCaroli’s ‘Haunting the Buddha’.