Perhaps an indication of the Buddha’s royal background and upbringing is his frequent reference to and apparent intimate knowledge of chariots (ratha). During his time chariots were used in war (they were one of the four of an army, the others being infantry, cavalry and elephant, A.II,116), by the rich but mainly by royalty. There is frequent reference to royal chariots and we know from the Mahabaratha and the Ramayana that they were used in coronation ceremonies (Dhp.151; A.IV,181). The parts of the chariot mentioned by the Buddha include the wheels (cakka), the body (panjara), the railing (apalamba), the upholstery (parivarana), the pole (isa) and the yoke (yuga). Some chariots were fitted with a canopy (pacchada). Another part was the tidanda but it is not sure what this was for. The Apastambasulba Sutra says that the dimensions of the standard chariot are – pole 188 angulas, the axle 104 angulas and the yoke 86 angulas suggesting that they weren’t very big. Chariot upholstery was sometimes of leather (the Kasika says vastra, kambala or charmana) but more usually of a fabric called pandukambala which was a type of red cloth imported from Gandhara (Ja.VI,501). Apparently tiger and leopard skin was also used. The most important part of a chariot was its wheels. The Buddha told a story about a wheelwright who made a chariot wheel so perfectly balanced that when set moving, it would roll until it stopped but remain upright rather than fall over (A.I,111). The wheel had four parts – the rim (nemi), the spokes (ara), the hub (nabhi) and it was attached to the axel (akkha) with a linch-pin (ani). The Buddha said that generosity, kind speech, and doing good make the world go around harmoniously the way the linch-pin allows the chariot wheel go round smoothly (A.II,32). Sculpture from ancient India and the remarkable find of an actual wheel at Patna, shows that chariot wheels had numerous slender spokes. The cakkavati’s wheel treasure and the wheels on the 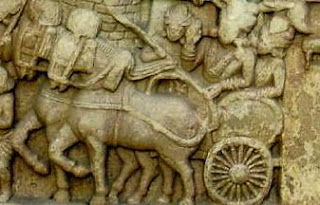 mahapurisa’s palms and soles had “a thousand spokes.” The earliest Dhamma wheels are depicted with numerous spokes, never with eight as is done today. Kautilya says that a chariot road should be 7 and a half feet wide which again tells us something about axel widths. There is quite a lot of information in the suttas about harnesses and livery but I haven’t had time to ferret it out. However, the colored picture above from Sanchi Stupa seems to show the horses with blinkers. Interesting! Does anyone know whether the ancient Indians used horse shoes?
We know from other sources that all the chariot parts were made and then delivered to the owner who then assembled them. The last stage of assembling the vehicle was called ‘cording’ (bandhana) indicating that the parts were held together with twine rather than with nails or pegs. This probably gave the chariot a certain flexibility and ‘give’ which compensated for not having springs.
The chariot was usually driven by a team of three – the charioteer (sarathi) and an assistant who held an umbrella, fan or, in warfare, a spear or bow. A third person, the footman (parishkanda), would run in front of the chariot. At night he might carry a torch (D.I,108). The normal chariot was drawn by one, two or four horses or by mules. Panini mentions camel chariots.
Chariots were the Alpha Romeo of their time and the Buddha often used them as a simile (e.g. M.I,124; M.I,149 and there is the well-known Rathavinita Sutta, M.I,396). And of course, the Buddha himself was called “an incomparable charioteer of persons to be trained” (anuttaro purisadhamma sarathi satta). Given this, it is perhaps appropriate to consider the Buddha a sort of spiritual Ben Hur. Probably the most famous passage in Pali literature is where Nagasena tries to explain to King Milinda the concept of anatta. Nagasena says that names are just denotations which may not represent an actual entity, Milinda expresses his skepticism of this idea and so Nagasena asks him he how he had come to their meeting. The king said he had come by chariot. “Show me a chariot” asked Nagasena. “Is the pole the chariot?” ‘No” said the king. “Is it the axle?” “No.” “Is it the wheels, the body, the flag-staff, the yoke, the reins or the goad?” and again Nagasena says no. “Then is the chariot something different from all these parts? (Mil.27). The king replies “No” and is forced to admit that ‘chariot’ is a term for a collection of parts. Finally Nagasena recites a verse from the Tipitaka –

Just as when the parts are put together
The word ‘chariot’ is used,
So to when the aggregates are together
It is the convention to say ‘a being’ (S.I,135).

There is also several fine verses where the Buddha compares the parts of a chariot to the spiritual journey.

The road it goes on is ‘Straight.’
‘Without Fear’ is its destination.
The body is called ‘Silent,’
And its wheels are right effort.
Conscience is the railings,
Mindfulness the upholstery,
Dhamma the driver
And right view runs ahead.
And whether it be man
Or whether it be woman,
Whoever travels by this vehicle
Shall draw close to Nirvana (S.I,33).

The third last line in this little poem (itthiya purisassa va) needs to be more well-known.
Posted by Shravasti Dhammika at 3:51 PM

"Does anyone know whether the ancient Indians used horse shoes?"

A tantalizing question. Try as i might, i can't recall seeing horse shoes amidst period-exhibits of a military or secular nature in India's many, many museums. Perhaps the ancient Indian horse shoe bore little resemblance to a conventional horse shoe? Certainly a detail to research further...Db

From The Arthashastra of Kautilya (4th century BCE), Ch 30, Section 47: The Superintendent of Horses

Regulation 44 (of 51): "The holder of reins, the binder of horses, the fodder-giver, the food-cook, the stall-guard, the hair-trimmer, and the specialist in poison-cure, should wait upon horses with their respective duties."

That farriers find no mention, here or elsewhere in the chapter, is perhaps significant. Db