The Bhutanese parliament is poised to pass a tough amended anti-proselytizing bill before the year is out. The amendment bill would punish proselytizing that uses coercion or other forms of inducement – which the country’s approximately 6000 Christians claim is aimed at them. “Now, under section 463 of the Penal Code of Bhutan, a defendant shall be guilty of the offense of proselytization if the defendant uses coercion or other forms of inducement to cause the conversion of a person from one religion or faith to another,” reported the government-run Kuensel newspaper on July 9th. Kuenlay Tshering, a member of Bhutan’s Parliament and the chairperson of its Legislative Council, said that the new section is consonant with Article 7(4) of the Constitution of the Kingdom of Bhutan, which states, “A Bhutanese citizen shall have the right to freedom of thought, conscience and religion. No person shall be compelled to belong to another faith by means of coercion or inducement.” He said that the National Council had proposed that offenses under the proposal be classified as misdemeanours, punishable by one 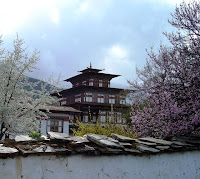 to three years in prison. Tshering said that the amendment bill “may be passed during the next session of Parliament, after the National Assembly deliberates on it in the winter session.”
Of the 683,407 people in Bhutan, more than 80% are Buddhist. Hindus, mostly ethnic Nepalese living in southern Bhutan, are estimated to be around 20% of the population. The country’s tiny Christian population is almost entirely Nepalese. According to the authorities there is no church in the country or any registered Christian organization or group. The Bible, however, has been translated into the national language, Dzongkha, as well as into Nepali. Since Bhutan became a democracy in 2008 after its first-ever elections – following more than 100 years of absolute monarchy – people have increasingly exercised their freedom, including religious choice. Home and Culture Minister Lyonpo Minjur Dorji said, “Bhutan is a small country, with a little more than 600,000 people, and a majority of them are Buddhist...We have Hindus mainly in southern parts. So why do we need more religions?” Buddhism is inextricably linked with cultural, political and social life in Bhutan. Dorji’s office sits in the huge monastery in Thimphu known as Tashichho Dzong. Buddhism unites and brings people together, Dorji said, explaining that the cultural and social life of a village revolves around its monastery. Dorji also pointed out that multi-religious Indi, Bhutan’s southern neighbour, is plagued by continual religious strife and says Bhutan wants to avoid this problem if it can. “India can survive riots and unrest,” he said, “but Bhutan may not, because it is a small country between two giants (i.e. India and China).”
The Bhutanese are very proud that they avoided colonization by the British and that they were not gobbled up by a larger more aggressive power as was their northern neighbour Tibet by China. But the incorporation of Sikkim into India in 1975 still haunts Bhutan’s leaders. Sikkim was a semi-independent state whose indigenous Buddhist population was outnumbered by immigrants from Nepal and which in turn precipitated the Indian takeover. The Bhutanese are understandably jittery that something similar could happen to them. In the last half century hundreds of thousands of Nepalese fleeing grinding poverty in their own country have settled in Bhutan’s lowlands. In the 1980s, Bhutan’s king began a one-nation-one-people campaign to protect its sovereignty and cultural integrity, which pretty much excluded ethnic Nepalese. Their protests in the 1990s resulted in a harsh crackdown by authorities, leading to the expulsion or voluntary migration of over 100,000 Nepalese, a good number of whom were Christians. Many of these people now live just across the border in India and are demanding to be recognized as Bhutanese citizens.
Evangelical Christians have long wanted to get a foothold in Bhutan and see Nepalese within the country and those expelled from it and now living in India just across the border as a means of doing this. These Nepalese are for the most part divorced from their Hindu roots, illiterate, desperately poor and thus easy targets for Christian conversion efforts. These missionaries are well-funded, superbly organized and absolutely determined that Bhutan will be the next ‘mission field’. The Bhutan’s constitution, adopted in July 2008, requires the state to protect country’s cultural heritage and declares that Buddhism is the spiritual heritage of Bhutan. The tragedy of this situation is that the missionaries’ agenda may require the world’s youngest democracy to limit religious freedom in order to carry out its constitutional obligations and preserve its unique culture.
Posted by Shravasti Dhammika at 5:33 PM