Character (sabhava) is the mental qualities and traits that make a person different from others. The English word is derived from the Greek for an etched or stamped mark. When we say that someone is a nice or an unpleasant person we mean that they have a predominance of positive or negative traits that are more easily noticed or more often manifest. When we are reborn we bring with us traits formed in the previous life (perhaps several lives) as well as innate underlying tendencies (anusaya). Within a few months these traits start becoming apparent and may be reinforced or wane according to circumstances. Our early childhood experiences may also form new traits. Likewise, circumstances may arouse the underlying tendencies. By the time we are in our early teens our character is fully formed although still malleable. Some traits will be strengthened and perhaps develop into biases (nata) according to the mental habits we form. The Buddha said, ‘Whatever a person thinks about and ponders on often, their mind gets a leaning in that way’ (M.I,115). Using an image similar to the Greek one, he also commented that some traits are like an engraving on a rock, others are like a scratching on the ground and yet others are like writing on water (A.I,283), meaning that some traits are difficult to change and others less so. If they are not changed either through deliberate conscious effort or by a particularly dramatic experience we might have, our character will remain relatively fixed, becoming more rigid and deep-rooted as time goes by.
Character is very important because it is a major factor in the course of our life. It influences how we see ourselves, how we relate to others and therefore how they relate to us, the way we deal with the vicissitudes of life and how we see the world. An important part of being a Buddhist is character building or developing what the Buddha called ‘a beautiful nature’ (kalyana dhamma, A.I,248; II,109). Broadly speaking, there are three steps in this process; (1) seeing the desirability of character transformation, (2) having a model or ideal character to work towards, (3) having and applying the means to modify the character. 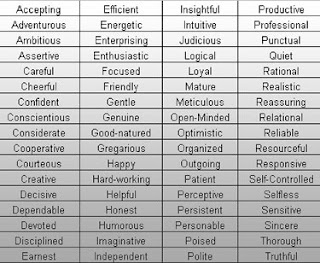 Some people, due to fortuitous circumstances in former lives as well as in the present one, already have a beautiful character. Most do not. Most people have never seen the desirability or even the advantages of changing themselves. Some of the things that can create the desire for character transformation include a personal crisis that they themselves have been responsible for, a close brush with death or being inspired by a particularly admirable person. Having seen the possibility and the need for change, one must then have an ideal to work towards. The Buddha of course is the perfect ideal; infinitely patient, unfailingly kind, utterly honest and profoundly wise. To 'take Refuge’ in the Buddha is to accept him as one's guiding ideal. Having decided how one would like to be, one then needs a practical program of transformation. The Noble Eightfold Path is such a program, offering as it does guidance on every aspect of life; the intellectual, the ethical and the psychological.

Posted by Shravasti Dhammika at 3:35 AM

Bhante, today I opened your blog wanting to find a way to learn from you how is to be considered in a dhammical way what I learned today about a Korean monk who set himself ablaze to death in a desparate attempt at fighting the Korean government policies concerning the environment and the plight of the poor and underprivileged people: http://www.buddhistchannel.tv/index.php?id=45,9331,0,0,1,0
I was shocked to read what this monk resorted to, I cannot think that he had other reason to do that than a sense of despair facing his own impotency to do good for the benefit of the weak, the downtrodden and the lesser forms of sentient life. Did this monk just give in to his own depression and plain committed suicide, or can his act be considered a dhammic way of denouncing the ills and evils of society and maybe be reborn in some high heaven with a chance to reach buddhahood in a next existence? Could he already be an awakened beeing when he died, or is his death unwholesome under a dhammic point of view?
More broadly, beyond this particular episode, what is your view concerning suicide? I already read your post "A gay tragedy", that too was a reading that moved me a lot and I keep considering and reading, and I also read Damien Keown's article "Buddhism and Suicide: The Case of Channa", available from http://www.buddhistethics.org/3/keown3.html. I translated both of them and put them on my site, by the way.
I understand the answer might not be easy and quick, actually I expect you to take some time to formulate an adequate answer to such a sensitive and critical topic, but I'd really appreciate if you did.
Thank you for this article about character and character building, I read it with interest and makes this question of mine not too off-topic.

I doubt that suicide would bring anyone's attention,especially the politician.It actually bring more benefit to them,as one more voice is silenced,and they don't have to murder that person.It appear to be a favor for them.

It may works in the past, but not these days.

I'm afraid your're right, Rahula, but I wonder if Ven. Moonsu knew it and if he decided to do it just the same. Beyond the practical usefulness oh his act, was his death still worthy of a bhikkhu, or is it to be considered unwholesome of a person who devoted his/her life to the Dhamma?
Yesterday I also thought about this: what would I have done would I have seen Ven. Moonsu when he was about so set himself ablaze? Would an attempt at saving him be an interference in his own kammic evolution? What about if I would just have ended disrupting the samadhic concentration of the last minutes of his life thus preventing him from living those last moments with the detachment needed not to be overwhelmed by the intence bodily sufferance death by fire causes?
What about if I did save him only to be the target of his scorn and disapproval for having disrupted his practice of self-immolation? Isn't it egoical playing the hero who saves other people's lives regardless of their motivations and of their spiritual conditions?
And what about if I just stayed there, sitting in meditation while the Ven. Moonsu was burning to death, would I have rightly deserved everyone's scorn and reproval for not having done anything to save him, not even calling for help?
What would the Buddha have done facing a disciple of his who wanted to kill himself? I guess he would have correctly understood the reasons beyond that monk's or nun's intention as well as the consequences of that very act and would have said the right things to deter him or her from doing it. But I would not have being able to do so much, so what were I to do from a dhammic point of view?

Dear Alessandro, maybe you'd want to consider these questions first. What is the aim of the noble life? Does the act of self immoliation contribute to this aim or encourage others toward it?

This article has been translated into Bahasa : http://selfyparkit.wordpress.com/2010/07/21/karakter-dan-pembentukan-karakter/

Thank you may all being be happy _/\_