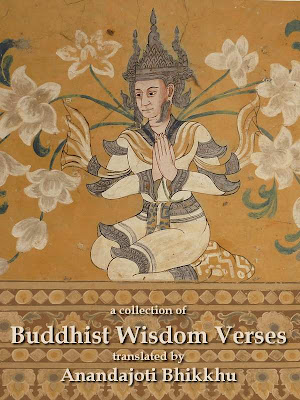 Until recently the vast treasure house of the Buddha’s wisdom was inaccessible to the majority of people who did not know Pali. Few people ever read the suttas other than the Dhammapada, the Metta Sutta, the Mangala Sutta and a few other small discourses. English speaking Christians had to wait until the beginning of the 15th century before they would read their sacred scriptures and the King James Version did not appear until 1611. Asian Buddhists had to wait until the 20th century. Today more of the Tipitaka is available in vernaculars but it is still little read. In 1952 in an effort to make the Buddha’s word more easily available one of the giants of the Sri Lankan Sangha Ven. Rerukane Candavimala, collected, arranged and translated into Sinhala 551 verses from the Tipitaka and published it under the name of Buddha Niti Sangrahaya. I am extremely happy to announce that this wonderful little book has now been translated into English by the English monk Ven. Anandajoti. The Buddha Niti Sangrahaya is an important work for many reasons not the least of which is that 63% of the verses in it are from the Jataka. Now the Jataka is often dismissed as ‘good for kids’, especially by Western Buddhists. This is to seriously underestimate them. In fact, the Jataka verses in particular, the only part considered canonical, contain a great deal of practical, challenging and insightful wisdom. The old translation of the Jataka (1877-96), while being a major pioneering effort, all too often obscures much of this wisdom. But Ven. Anandajoti’s online version of the Buddha Niti Sangrahaya under the title Buddhist Wisdom Verses, does more than just give a translation. He gives the reader a detailed introduction and a readable English translation of them, there is an index to the subjects dealt with, and an index to their source. To access this useful and important book work click here. And for more in the Jatakas see http://sdhammika.blogspot.com/2010/08/new-jataka.html
Posted by Shravasti Dhammika at 11:20 PM

Thank you for mentioning that book. I really like the contents and way how it's organized.

In his preface venerable Ānandajoti says that he removed two verses which he finds “offensive to our modern sensibilities”. They are both from “infamous” Kuṇāla-jātaka. I wonder if you could write something more about it?

Dear Piotrek,
Ven. Anandajoti was referring to two verses from the Kunala Jataka that are particularly misogynistic. Myself I can’t say I find them particularly offensive – but then I’m not a woman. I have heard similar things said when groups of men are talking together and they are of the type found in many sacred scriptures and in pre-modern literature written by the monks and priests of most religious traditions. And in places in the Middle East they would be considered commonplace and pass without remark. While a good deal of the Jatakas contain ideas and values quite ahead of their time, other parts reflect the society in which they were composed. Some Jatakas portray woman as faithful, loyal, perspicacious and virtuous while a few others, the Kunala Jataka being the best (or worst) example, brand them as over-sexed, untrustworthy and treacherous.