March 22nd, , Democratric Voice of Burma.
A charity set up by a prominent Burmese film star to provide free funerals for hard-up families yesterday held its 100,000th ceremony in Rangoon. A regular target of attacks from the Burmese junta, the Free Funeral Service Society (FFSS) was founded a decade ago to relieve families of the onerous cost of funerals, which often cost several hundred dollars in a country where average annual salaries are little more than $US400. The founder, Kyaw Thu, a two-time Myanmar Academy Award winner and once one of Burma’s leading film icons, told DVB that the group was also able to provide the family of Chit Han, who was cremated yesterday, with 350,000 kyat ($US400). Sin 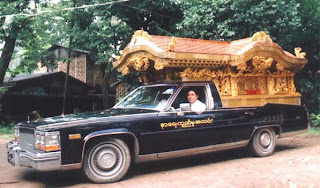 ce Kyaw Thu’s retirement from the big screen and switch to social work he has become an increasingly vocal critic of the ruling junta, and was arrested after publicly supporting the September 2007 monk-led uprising.
His relief work and raising of some $US400,000 following 2008’s cyclone Nargis also drew the ire of the generals, who eye with distaste anyone filling the void left by the decrepit public services. The rising popularity and influence of the FFSS, which relies on private donations, among the Burmese public has worried the junta, so much so that in February 2008 it ordered several Rangoon journals not to publish information about the group’s activities, while the year before, its registration renewal was refused by the government until an appeal met with success.
Please visit our websites, Buddhist Relief Mission: http://www.brelief.org/
Sri Lanka reports: http://www.brelief.org/reports/
Posted by Shravasti Dhammika at 1:41 AM

Very nice, thanks for the information.
sewa mobil

It leaves me with great sadness every time i come across the type of Military Junta thats running in Burma.
More because Goenkaji in his lectures remind us that we have to be thankful to the People of Burma for Preserving the Technique of Vipassana in its Pristine Purity.
I some times think that India Too needs a Strict Military Junta to root out the Evils of corruption,but articles such as this makes me think twice.

I really appreciate it, thank you for sharing.
iklan baris gratis