The Battle For The Buddhas 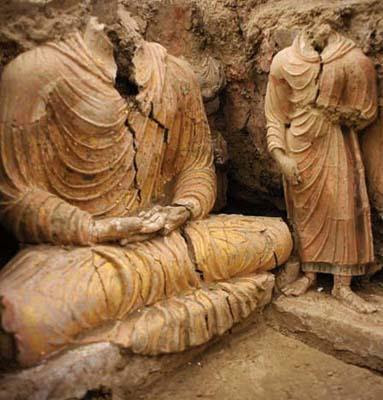 It might be called the battle of the Buddha’s feet, a struggle to rescue one of the great Buddhist sites in Afghanistan. The deadline has just been cut to a year for a team of Afghan and foreign archaeologists to rescue what they can from the sites of four shrines and temples round Mes Aynak - the Copper Mountain - in the plains of Logar, 25 miles south of Kabul. The Chinese have signed a 20-year lease to make this the biggest open-cast copper mine in the world outside Africa. They plan to blow up the mountain and what is left of the Buddhist temples, hoping to dig as much as they can of the copper estimated to be worth £45 billion. Initially, they’re offering £800 million a year for the concession. It is a race between Afghanistan’s cultural past and commercial future. A team of 32 archaeologists is moving everything it can from the site, rediscovered in the Sixties, rebuilding one of the temples and putting the treasures in a custom-built museum. They are helped by 900 local Afghan workers. Initially they were given three years, but under pressure from the Chinese, President Karzai has said the conservation must end for the blasting and mining to begin late next year.
“The site is very important because this was a main junction on the Silk Road. The monks came here and settled between the 5th century and the 8th century, lured by the copper,” said Philippe Maquis, the leading French archaeologist at the site. He points to large pieces of handsome Buddhas, complete with swirling drapery - said to be inherited from the Greeks who came here with Alexander the Great. A battered statue three times life-size shows the Buddha attaining pari-Nirvana. Next to the figure are two huge stone feet, more than four times life size. “These pieces are the same style and from the same time as the great Buddha statues of Bamiyan,” said Mr Maquis. The Buddhas of Bamiyan were blown up by the Taliban in March 2001. Mes Aynak has not suffered such outright vandalism, although Osama bin Laden moved his main training camp here in 1999. “I think we can really do it,” said Dr Omar Sultan, 61, deputy culture minister, a renowned archaeologist. “If we get the funds and the team of 40 archaeologists, I get the job of essential conservation done by the deadline.”
Looking across the monastery and the camp for Chinese workers, it is a scene of utter tranquility. But in two years the mountain which has lured mystics, pilgrims, and entrepreneurs - often all three in one - for more than 5,000 years will be blasted to oblivion. It is the starting point of yet another invasion of Afghanistan, this time by the Chinese in their relentless charge for the world's mineral riches.
Source: London Evening Standard by Richard Fox.
Posted by Shravasti Dhammika at 1:38 PM

Given the amount of corruption that probably exists in the system I doubt that the concession moneys will benefit ordinary Afghanis. It'll be swallowed up by corruption. Moreover that mine is going to be a toxic hell hole that will damage the region's ecosystem.