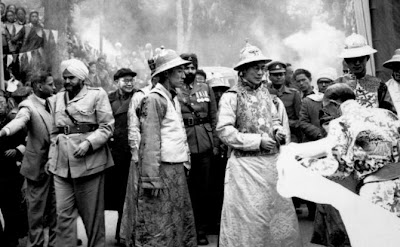 This is more than just one of those ‘Ah! The good old days’ videos. It is also of considerable historical interest. It is a compilation in three parts, of footage taken during the Dalai Lama’s visit to India in 1956. Not many people know it but India, an avowedly secular state, celebrated the Buddha Jayanthi with more fervor than did most Buddhist countries. A few in the opposition grumbled at the vast amount of money allotted for the celebrations but Nehru was for it, indeed it was mainly due to his personal interest that it happened, and so the naysayers were silenced. The highlight of the year-long celebrations was the arrival of the Dalai Lama and the Panchen Lama, at Nehru’s personal invitation. Beijing was none too pleased to let the Dalai Lama go but they were still keeping up the pretence of friendliness to India so they reluctantly agreed. When they saw the Dalai Lama being treated like a head of state and the huge, enthusiastic crowds that assembled to see him everywhere he went, they really began to get nervous. Finally Chao En Lai flew to India to make it clear to Nehru personally that whatever the circumstances, the Dalai Lama must return to Tibet after the celebrations. In the film we see him arriving. One clip shows the DL, Nehru and Chao watching Indian children marching and doing calisthenics, out of step, badly co-coordinated and all over the place. I suspect that when Chao saw them and compared them with the perfectly drilled and disciplined Chinese kids he got the idea that it would be worthwhile to invade India, which of course happened seven years later. In other clips we see the DL together with Rajendra Prasad, Dr, S. Radhakrishna, Indraji, the Chogyal of Sikkim, Devapiya Valisinghe and even of my own teacher Ven. Matiwella Sangharatana. We see the DL planting the Bodhi Tree in what was to become Delhi’s Buddha Jayanthi Park, touring the still-to-be-completed Nagarjuna Sagara, Sanchi, Ajanta and many other places. The DL and the Panchen Lama were even taken to the Calcutta races!! Two things in particular attracted my attention while watching this video. One is the absence of bodyguards and security. We see Nehru, Prasad, etc., walking through crowds of ordinary people and the usual stray Indians gorking at the dignitaries and wandering here and there. They were the days! And the other thing, at the very beginning of the video, the DL and his party going to India, not by plane or even jeep, but by horse, only switching to vehicles at Gantok. You can see it at http://www.youtube.com/watch?v=ciIlDUb_7qU

Posted by Shravasti Dhammika at 2:40 PM