As she sees her daughter return home after school, 31 year-old Nha beams with pride and love for the little girl. Eight year-old Thuy gives a mischievous smile to her mother and swiftly gets on her lap to cuddle. “It is only when Thuy turned four years old that we found out she was also HIV positive. She had always tested negative. The news came as a shock. I love my daughter so much. I felt worried and depressed. I was starting losing hope in the future”, Nha recalls. Thuy is now studying in grade 3. “I like going to school a lot”, she smiles. “I have friends and I am learning many things every day.” At her school, nobody is aware of her HIV status. “Thuy looks very healthy. She is tall and strong. When she was younger, she often got sick”, Nha says. “I have friends who decided to be open about the fact that their child was HIV-positive. When parents of other students came to know it, they refused to let the child come back to school. This is how bad it can get. I do not want my daughter to suffer. So I just keep quiet”. Thuy and Nha undergo regular health check-ups at the nearby hospital. Every month, Thuy, Nha and Nha’s second husband, Anh, receive free anti-retroviral treatment. Nha’s first husband died of AIDS in 2002. “He was working in construction and traveling a lot. He probably contracted the disease through unsafe sex with a sex worker”, Nha says. It is around that time that she found out about her own HIV status. “I cried a lot when the doctor told me I was HIV positive. It’s a long time ago now, but I will remember it forever”, Nha remembers. “I did not know what the disease was about, so the doctor explained what it meant. I felt desperate”. Nha’s current husband is a drug user. He works on and off as a motorbike taxi driver, but their two meager salaries are not enough to make ends meet. He most likely contracted the AIDS virus through injecting with shared needles. “Life is not easy. I am doing domestic chores to earn a living’, adds Nha. A few years ago, friends of Nha introduced her to Phap Van pagoda. There she met Monk Huan and his team of monks and volunteers providing support and care to HIV-affected children and families. 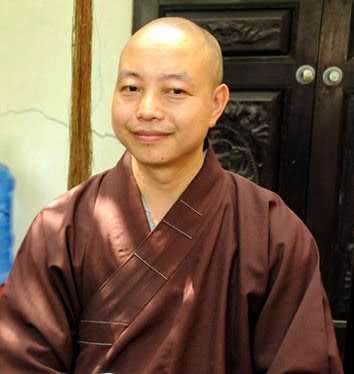 “They not only gave me food, they also gave me tremendous emotional and psychological support. There, I was also able to meet with people who had a similar story. I realized I was not alone. I really helped move forward. I have also learnt how to communicate with my community and protect my family.” At the pagoda, Monk Huan, its chief monk, organizes Buddhist teachings twice a week. “Through these sessions, we aim to reduce stigma around HIV and we share information on HIV: how it is transmitted, how to protect oneself. Over 2,000 children and young people have attended these sessions in the past two years”, he says. In addition to these sessions, a team of volunteers trained by the monks undertakes monthly visits to approximately 40 families in the neighbourhood. Approximately 220,000 adults and children are infected with HIV in Viet Nam. In a country where over 80 per cent of the population is Buddhist, Buddhist monks are extremely respected and highly influential. The Buddhist Leadership Initiative was established by UNICEF Viet Nam in 2003. Through the initiative, UNICEF works closely with the government and international partners to train monks to support the special needs of people affected by HIV and to raise awareness of HIV and AIDS in communities. “Buddhist monks are a key elements in our strategy to decrease stigma and discrimination against families living with HIV/AIDS,” says UNICEF Viet Nam’s HIV and AIDS specialist, Yasuda Tadashi. “I receive great spiritual support from the pagoda”, says Nha. “They are an inspiration for me. I have also made many friends at the pagoda. This makes me hope for a bright future, especially for my daughter. I want her dream to come true: she wants to become a teacher.” UNICEF is currently providing support for implementation of the Buddhist Leadership Initiative model in seven pagodas in its two main urban centres (three in Ha Noi and four in HCMC).
By Sandra Bisin from UNICEF wed site

Posted by Shravasti Dhammika at 4:13 PM

Hmm. Any research about HIV rates within the monkhood? Could be interesting. Nowadays many more children in SE-Asia die from tubercolosis - or in road accidents. I have found out in Cambodia that monks did not try to change the crazy driving habits there. The same goes for Thailand. Recently I saw a cigarette smoking monk in an orange robe driving a truck himself.

Its really sad that HIV can't really be detect as early as possible. But, I am sorry for those who suffer I know this is really hard. I have felt something the same before.