The Gift Of Sight

The headquarters of the Sri Lanka Eye Donation Society is housed in an unpretentious three-story building in the heart of Colombo's residential Cinnamon Gardens district, where the gift of sight is flown to many parts of the world. Today, its International Eye Bank is one of the world's biggest, supplying human eyes to restore vision to people in as many as 57 countries, including Japan. "We have supplied nearly 56,000 donor corneas to 117 cities in 57 countries - over 9,000 to Japan," as of Sept. 9, said Janath Matara Arachchi, manager of the International Eye Bank. "We realized there was a vast potential to collect donor eyes in this country, over 10 times what we could use here. Ow 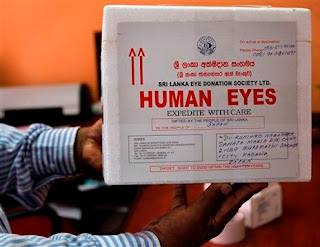 ing to a worldwide shortage of donor eyes, our founder, the late Dr. Hudson Silva, mobilized that potential," he said. Sitting in his office with Siri Cassim, the doctor who directs the eye bank, Matara Arachchi explained that the Buddhist concept of dana, or giving, was the root of their success. "Buddhists believe that it is an act of great merit to gift their eyes after death to someone living who would have the gift of sight. Dr. Silva was initially inspired by the Sivi Jataka, a story in which the Bodhisattva gives his eyes to a blind man. Over 870,000 people have signed consent forms we hold asking us to take their eyes after they are dead." Both my parents were very keen that their eyes are donated when they died and the first thing I did when my mother and father passed away was to telephone the Eye Donation Society and arrange for their corneas to be taken," the son of two donors said. "A technician from the society came to our home and removed the corneas. There was no disfigurement of the bodies," he said. Cassim, a senior consultant on eye surgery, explained that corneal graft surgery today involves taking the whole eye ball, not just the cornea, as was done in earlier years. "Even if an eye is not suitable, we take it because it satisfies the families of the donors," he said. "It is not wasted. It can always be used for research." Countries that have received corneas from Sri Lanka include Japan, Thailand, Egypt and China. Japan has been very supportive of the society, with much assistance rendered by its Lions Clubs, notably those in Numazu, Shizuoka Prefecture, and Kurashiki, Okayama Prefecture. The society also received support from noted eye surgeon Akira Momosa of Kiryu, Gunma Prefecture. The eyes of prime ministers have been donated, as well as those of the late Sri Lankan President J.R. Jayewardene, who had a special relationship with Japan. His corneas were successfully grafted to two Japanese recipients. The society has 450 branches throughout Sri Lanka, with trained volunteers in each of them ready to remove donor eyes whenever called. "Most of the eyes we receive are taken from hospitals, but we commonly visit homes as well," Cassim said. "We check the body for tattoos as well as injection marks to guard against possible risk of HIV infection." He said that a cell count is first conducted to ensure the cornea is suitable for grafting. A count of 2,000 cells per sq. millimetre is good, but a low cell count can mean the cornea is unsuitable for grafting. "There are six muscles around the eye and the optic nerve and once you cut them the eye can be removed," Cassim explained. "It is sterilized with an antibiotic and iodine solution and examined for suitability for grafting." He said that an eye must be removed from the body within 24 hours of death, packed in ice and received at the laboratory within four hours. There are three types of preservation fluids that allow a cornea to be preserved for five, 14 and 21 days, respectively, at a temperature of 4 degrees. The 21-day fluid is the most expensive one. "We have sent more eyes abroad than have been used locally," Matara Arachchi said. "Nothing is charged for providing corneas for grafting here, but there is a charge, for example, $250 per eye in Pakistan and $450 in Japan, to meet processing charges and other costs." The eye bank operation is slim and tight, with a paid staff of 47, including drivers, clerks and technicians. Expenses run about 1.6 million rupees ($16,000) a month.
By Manik De Sliva from Kyodo News 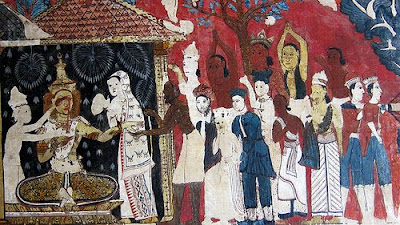 I mailed to pitijoy@yahoo.com,a few days go, regarding a particular issue .I hope I mailed to the right id ,if not,could you tell me your mail-id.

I get dozens of emails every day so I am not sure which was yourse as you give no name. Email me again using the name Ananda

Very nice post.
I never know that there's an eye bank. I wonder how they can preserve those eyes?