I Want My Mummy 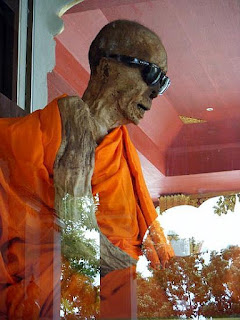 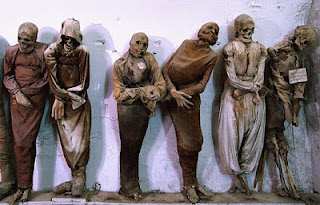 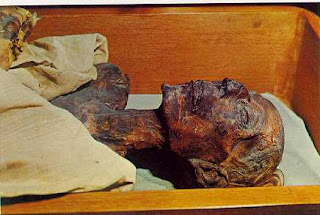 Mummified monks are apparently quite popular in Thailand, Vietnam and in China,  although less so. The Tibetans have or at least did have until the Red Guards destroyed them, a few mummified rimpoches and lamas too. Some of the saints in Catholicism are deemed to be 'miraculously uncorrupted.' I don’t know what Communists call the mummified remains of Lenin, Ho and Mao, although when I saw the Great Helmsman back in the early 80s   he looked decidedly  waxy.  ‘Do Not Expose To Naked Flame!’  Singaporean Buddhists returning from travels in Thailand sometimes ask me what I think about or how I can explain the mummified monk they saw while they were there. In response I always tell them that amusing story about Ramases II. Ramases was the greatest of all the Egyptian kings, perhaps the greatest ruler of all time. His many titles included  ‘Conqueror of Syria’ ‘Subduer of the Hittites’,  ‘Conqueror of Nubia’  and the fact that he reigned for 66 years alone qualified him to be called  ‘The Great’. It is even thought by some that the  Pharaoh  mentioned in the Old Testament is Ramases.  After  his mummy was discovered in 1881 it was shipped off to England. When it arrived at Tilbury the customs officers had to charge some duty on it but they didn’t know under what category it should be classed. Finally, Ramases II, King of Kings, was categorized under and charged duty as - dried fish. The top picture is of Thai Buddhist  mummy (What's he need the sun glasses for?).  The second is of the Sicilian Catholic variety and the bottom one is the original  ‘King of Kings’ brand of dried fish.
Posted by Shravasti Dhammika at 5:17 PM

Lama is dug up 10 times a year to prove to pilgrims that his body has not decayed:

The sunglasse prove what we Buddhists always knew that even our mummified monks are cooler than all the rest..Rock and Roll good people. On a more serious note, with all these new Blasphemy and anti hate speech laws pending in the western world, referring to Rameses as dried fish may enter the Akashic record as an offence.

There aren't many Communists in Russia now, but I can assure you that no one ever thought that Lenin's corpse is sacred or preserved by miracle.
It was made long-lasting with the help of conservants and wax. It is wide-known fact and no one in Russia argues with it. In fact nowadays many people think that it's time to bury Lenin's body, but the decision isn't made yet.