It’s always useful to have a few good insults up your sleeve.  You never know when you might need them. The Tipitaka can provide you with a rather rich arsenal of insults, abusive retorts and swear words. We get familiar ones like ‘Donkey!’ ‘Ox!’ and ‘Camel!’ (Vin.IV,12). To call someone ‘Shorty!’ or ‘Stretch!’ was considered a bit rude too (Vin.IV,7). You could pass aspersions on someone by saying “Your father and mother must be dead!” (atumari matumari) or by calling them “the son of a childless mother!” (puttamataya putta) and as today, calling a woman a whore (bandhakini) would be taken very badly indeed (M.I,449; I,524; Vin.IV,24). One of my favourite insults is ‘Deer shit!’ (Migalandika, Vin.III,68) Deer? Why deer feaces? One could understand pig shit, dog shit or even bull shit. But deer shit? I find this rather genteel. A person’s color or social status could be disparaged or doubted and the ancients had no compulsions about using the equivalent to what the Americans delicately call ‘the N word.’ The various ascetics, priests and monks were pretty good at exchanging insults and “stabbing each other with verbal daggers” too (M.I,320). Brahmins often referred to the Buddha’s ordained disciples as “bald-headed menial monks” (mundaka samanaka ibbha, D.I,90) and “the scrapings of our kinsmen’s foot” (bandhupad’pacca, D.I,90). Once some brahmins who had become monks commented to the Buddha that their fellow brahmins   “revile and abuse us. They do not hold back with their usual flood of insults.”  (D.III,80). 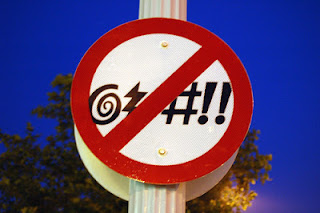 It is interesting to notice the difference between the Buddha as he is  usually thought of being in popular New Age-like imagination and how he is portrayed in the earliest records. In the former he is a benignly smiling sage who graciously approves of all beliefs no matter how silly or unsubstantiated and even if he does disapprove of any he would never be so impolite  as to say so. In the latter he has a clear and precise vision of Truth and of right and wrong and is not afraid of pointing out the contrary of this,  although he nearly always does this at an appropriate time and in a gentle, polite manner. But not always!  When the Buddha heard that the monk Arittha was going around saying that indulging in sense pleasures (i.e. sex) is not really a hindrance to liberation he repeatedly called him ‘Stupid man!’ (moha purisa, M.I,132). This is more a rebuke than an insult but it sometimes got a bit stronger than this. He said a lay disciples who believed in and practiced various superstitions would be the outcaste (candala), the filth (mala), the scum (patikittha) of the lay community (A.III,206). After Devadatta’s plots and schemes the Buddha called him a chavassakhelapakassa to his face (Vin.II,188). Now there is some uncertainty as to exactly what this term means but there is no doubt that it would qualify as strong language. Miss Horner translates it as “wretched one to be vomited out like spittle!” According to the PTS Dictionary chava = corpse or wretched, and khelapaka = something like ‘phlegm-eater. How about ‘Deadbeat lickspittle!’?
The Tipitaka only gives a few examples of a physical gesture used to insult someone, e.g. to snap your fingers at them (D.II,96). Apparently shaking your head and waggling your tongue after someone had told you something was a way of saying “You are talking nonsense” (M.I,109).
Perhaps because I am an Australian I find all this rather mild and I suspect the Buddha’s contemporaries, or at least the circles he moved in, were generally a polite and urbane lot. Narendra Wangle’s excellent Society at the Time of the Buddha (the revised edition, 1995) has several sections analyzing all the modes of address used by the different groups and classes within ancient Indian society. It shows that subtle put-downs and deliberate slips of the tongue were far more common than  outright insults – e.g. to address someone socially superior to oneself in terms properly used for someone equal to or inferior to oneself.
Posted by Shravasti Dhammika at 4:45 PM

Dear Unknown, you are free to use it, just give the source. And then give me the address of your blog.

Man,the crap u talk is not what buddha said!

Oh well, it's more about intention behind and some aspects of truthfulness. If I tell you that your are a "blatherskite" you could be hurted, or feel reseased as well and I could have the intention to harm your or to give you a hint that you lose the way.

Well certainly those days the people must have been a lot more polite. I find that people abuse a woman by casting aspersions on her virtue while in the case of men it is an attack on his virility . A gender bias certainly!