Karimun Island is some 30 kilometres west of Singapore. Because of its strategic  location right in the middle of the straits between the Malay Peninsula and Sumatra ships passing between India and Java, Sumatra or even beyond to China, in ancient times passed by and often stopped at Karimun Island.  On the northern tip of the island is the earliest evidence of both Buddhism and of Indians in the general Singapore region.  On the 9th March myself and a few friends set off to have a look at this evidence.
The trip to Karimun takes an hour and a half and requires obtaining a one day Indonesian visa. After landing and passing through customs we piled into two taxis and drove the 25 kilometres to Pasi Panjang. The surprisingly high jungle-covered mountain at the end of the island is half eaten away by an immense quarry. The granite from this quarry is  shipped all the way to Singapore for constructing breakwaters, foundations and retaining walls. Right at the foot of the mountain is a small shrine surrounded by a metal railing. On the sloping rock sheltered by this shrine is six Sanskrit words written in Devanagri script from about the 8th or 9th centuries CE. The inscription reads Mahayanika Golapanditasri Gautama Sripada. The meaning is clear enough and can be translated as “The sacred footprint of Gautama (was revered by) the   Mahayanist scholar of Bengal.”
Mahayanika refers to someone of the Mahayana school of Buddhism. This school was the dominant one in the Malay world  until the  12th /13th  centuries when it started to give way to Islam. Gola is probably an Indonesianized version of gauda, the ancient name for Bengal, and pandita means a scholar, in this case almost certainly a Buddhist monk. Sri means holy or lustrous, and pada is a footprint. We know from ancient sources that Buddhists monks, mainly from the great universities of Nalanda in Bihar, and Somapura and Jagaddhala in Bengal, travelled and taught widely in Sumatra and Java. No doubt it was one such monk who had the Karimun inscription carved as a record of his visit. No estampage or tracing of the inscription has ever been published and it has been worn since it was first examined by archaeologists in the late 19th century so I made a rough eye-copy. One of our party had the bright idea of tipping water over the inscription and immediately the letters became much clearer.
The footprint referred to in the inscription is a natural indentation in the rock to the left of the shrine. A little further on is a rock pool, possibly filled by water flowing down the incline when it rains. It seems probable that ships originally  stopped  here to replenish their water. Eventually someone saw the footprint-shaped indentation, identified it with the symbolic Buddha footprints seen elsewhere, and that in time seamen, merchants and pilgrims stopped here to pray   for a safe journey or to give thanks for one successfully completed. Then at some time in the 8th/9th a Bengali  monk stopped here and left a record of his visit in big bold Sanskrit letters. Our interesting day excursion ended just after sunset with our arrival back in Singapore. 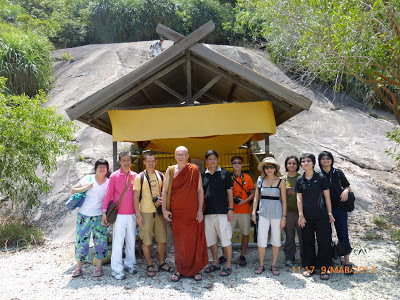 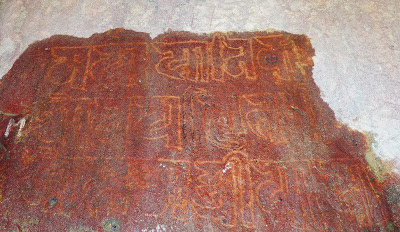 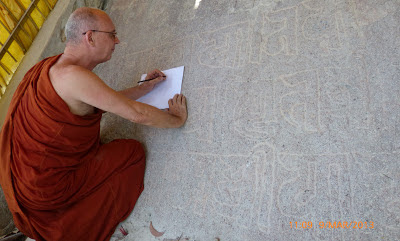 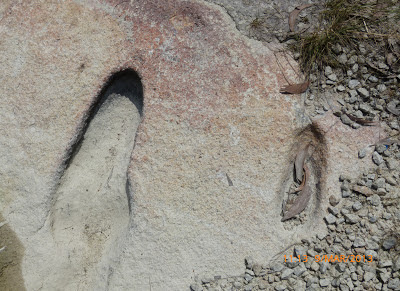 Posted by Shravasti Dhammika at 3:12 AM

Thanks Bhante and your fellow travellers for bringing this lost treasure to our attention.

Anumodana, and thanks for this explanation, coz we're Buddhist in Batam had been looking for someone to translate it, but no one knew.

Dear Suwarno, If you send your email address I will give you the full details of the inscription.

Hye, I'm Nizam from Malaysia and I'm currently stduying about our ancestor's heritage... May I have the detail of this inscription?? Please email me at zamspotte@gmail.com

Thank you for your sharing. After reading this we are planning to head for this place. If possible can you send me a copy of the inscription. Jlnah@hotmail.com. Tks u in advance.

I am Nathan from Singapore. I am a frequent visitor to Karimun Island since year 2000 and promptly visit the shrine mentioned here. I have some photos since then. My friends and me always perform prayers with insence fruits and sweets. We believe it to be a Punjabi guru as we saw Guru in a tile which was also broken and chipped edges. We started painting and some restoration work on 2014. This year since March 2016 we as a group did major restoration to flooring and changed roof covering along with it we placed a bigger photo of Guru. We believe the footprint beside the shrine is of Lord Hanuman as we were told by some locals there. We are happy to share more information please email to 329nathan@gmail.com