Subhadda And The Three Sticks 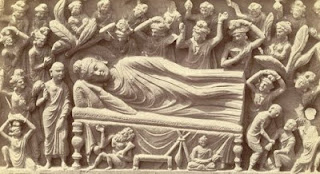 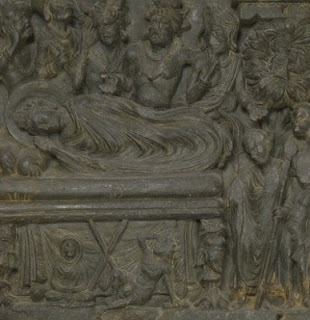 Subhadda was the last person converted by the Buddha. Once, the Buddha said:  “Even if you have to carry me around on a stretcher (because of sickness or old age) there will be no change in the clarity of my wisdom. If anyone were to speak rightly of me they could say that a being not liable to delusion has appeared in the world, for the good of the many, out of compassion for the world, for the good and happiness of gods and humans.” (M.I,83). In this sense the Buddha was true to his word. Only a few hours before his passing, as he lay surrounded by his disciples, the wandering ascetic Subhadda pushed his way through the crowd wanting to ask him some questions. Ananda held him back saying: “Enough Subhadda, do not disturb the Tathagata, for he is weary.” The Buddha heard this and told  Ananda to let the ascetic come to him  “for whatever he will ask is because he is questing for enlightenment.” Subhadda sat before the Buddha and the two men spoke for a while. Subhadda took to heart what the Buddha said and later he attained enlightenment (D.II,149). Such was the Buddha’s compassion that he taught the Dhamma almost to his last breath.
Ancient depictions of the Buddha’s passing   often  include images of a person grieving and another of a monk meditating. This first figure represents the Mallas sobbing, as mentioned in the Maraparinibbana Sutta. The meditating figure represents the monks who were enlightened who spent the evening the Buddha died meditating or discussing the Dhamma, again as mentioned in the sutta. However, not infrequently, the meditating figure is  flanked by what looks like a tripod supporting some round object. What is this curious thing?
In the Anguttara Nikaya  the Buddha mentions a sect of ascetics called the Tedandika, Those of the Three Sticks (A.III,276). This same  sect is also mentioned in some early non-Buddhist texts, and an ascetic in the Jataka is mentioned as having three sticks (tedanda, Ja.II,3160). It seems that these ascetics carried a three-piece staff  over their shoulders on the end of which they suspended their begging bowl water pot or water filter. When they rested they assembled the staff into a tripod and used it to support their accoutrements.  Nowhere in the Tipitaka is Subhadda mentioned as being a Tedandika but there must have been an early tradition that he was. So when the the meditating monk depicted in parinibbana scenes is shown with a tripod he is not representing the monks who remained calm after the Buddha’s passing, but rather Subhadda, the Buddha’s last disciple.
The tripod in the third picture is clearly shown supporting a water pot with a spout rather than a bowl. 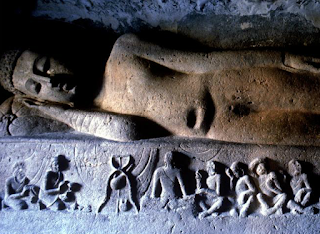 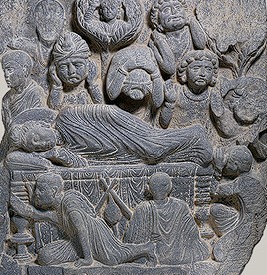 Posted by Shravasti Dhammika at 11:48 PM

Even today there are vaishnavite monks in India who carry three sticks tied together for no apparent reason except tradition and some mystical interpretations. This makes so much sense!!

Dear Ravi, thanks for that interesting information. If you could get a photo of one of these monks and or some more information about them I would be most grateful.

Dear Bhante,
If you google for the term "jeeyar" in google images, you can find many photos with vaishnavite monks holding tridanda. Jeeyar is a term for monks under Ramanuja's vishnu worshipping order. As far as I am aware, they use it much as a king would use his sceptre ie no practical use nowadays.

Jeeyars are monks of the 'Sri Vaishnava Sampradaya',they supervise worship and other activities in famous Vishnu temples in south India.Their primary work is to disseminate Vishnu Puja.Monks of other Vaishnava(Brahma Sampradaya & Gaudiya Sampradaya(North Indian)) and Shaiva(ex.Shankaracharya)traditions also carry staffs(Shaiva-I think one stick only).Some Jeeyars take the prefix 'Tridandi' and carry a triple-staff.I have seen it with them always,they carry it even while walking,sitting,worshipping etc. I do not know the exact reason but I assume the number of sticks is an indication of the Vedantic philosophy they follow.

Dear Ravi and Blogger, again thanks very much for this extra information.

SingaporeMemoryProject said...
This comment has been removed by a blog administrator.
February 28, 2013 at 11:47 PM