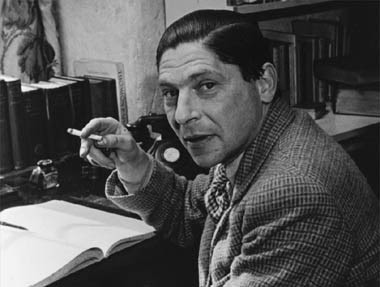 
Posted by Shravasti Dhammika at 12:33 AM

Thanks for referring to Koestler. Well, some lean to communism, as he (and, to my knowledge, Brian Victoria) once did, some to fascism. It is hard to say which had done more damage over the long run. But it can be said that Victoria's book, so often quoted, is biased and flawed.

I had a whole article online where I pointed that out for three zen teachers whom he had mentioned, Soen Shaku, Kodo Sawaki (you can find an exchange of Victoria and Muho, who is in the zen lineage of Sawaki, on this website: http://antaiji.dogen-zen.de/eng/200801.shtml) and Omori Sogen. For Sogen my piece in German is still online: http://der-asso-blog.blogspot.com/2010/04/omori-sogen-und-die-buddhaschaft-aller.html

My point is that Victoria refused to accept what is a rather deep zen wisdom and training that deals with the ability to let go of one's life in certain situations, not the least those where you "fight for others". Whatever wrong conception was behind Japan's hegemonialism, the altruistic power that is behind Omori's teaching for example can be felt by quite many who practice martial arts in combination with zen.

Sadly, we have to acknowledge that most of the Theravadin countries whose monks would mostly not subscribe to such a philosophy are under communist or military rule today (Cambodia, Laos, Vietnam, Myanmar) whereas the fascism of Japan led to a rather quick defeat and to democracy.

A new scientific book on war and religion is out: Just War in Religion and Politics (Jacob Neusner Series: Religion/Social Order), you can look inside the book at amazon.com

I loved Koestler's book 'The Lotus and the Robot' what a fabulous array of odd characters. Although the Shankaracharya sails through with flying colours....Koestler found him humble, radiating a quality he couldn't quite understand.

That's a nice quote re: Suzuki - it shows off K.'s sardonic humor. I've only read "Darkness At Noon" which left quite an impression. I was taken aback when I heard his name connected with the discordianish "23" believers.

Probably Suzuki could have accepted Koestler's comment as a compliment. :) I had read the three volumes of that great work by Suzuki, even before I started practising Buddhist meditation in earnest. And I saw in Zen, after centuries of mystified Buddhism, a return to one of the most important aspects of Buddha's original message - the need to reject our mundane, conditioned thinking patterns in order to achieve direct understanding of this world and transform our confused mentality.

Yes, Zen can help us see the conditioning that is in our mind. It is baffling to us because the methodology is unusual, like asking a "strange" question, or conducting an apparently cryptic dialogue. It does not explain but seeks to stir our mind into undertanding through insight. Zen (or Chan in Chinese) is very much bound idiomatically to the Chinese language (and it is the Chinese language used 1,500 years ago). Thus translations become more baffling, and translating the meaning of Zen literature loses much of its efficacy or could only be as good as the translator's understanding.

While a resolutely cognitive type like Koestler would be unlikely to be comfortable with Zen’s very direct uncognitive approach I do think his comment on Suzuki’s writings is valid, which is why I quoted it. If it takes three large volumes to explain something simple I think there is a problem somewhere. Comet-Sponville said “Intelligence is the art of making complex things simple, not the other way around.” What then is making something simple long and complex?

Dear Venerable: I am not sure how many people other than you who had looked into Zen found it to be "something simple" :)

Dear Walter, I have not studied Zen/Chan enough to know whether it is simple or not but that’s what I am always told and have read. “...not dependent on words or letters, directly pointing to the mind of man...” Perhaps “immediate” or “uncomplicated” might be better descriptions.

To Walter: The word Zen/Chan originates from the Indian (Pali) word Jhana (Dhyana in Sanskrit), which means a level of concentration (absorption). Zen meditation has two forms - breath meditation - very similar to Buddha's anapanasati, and concentration on a puzzling story which has no logical solution. And Buddha also warned not to depend too much on our logical mind which, in fact, is an obstacle on the way to direct knowledge and understanding.
To Shravasti Dhammika - Buddha once said that he can explain his teaching very briefly - in just few words, or in a number of very long discourses. The problem is not the number of words or volumes but in unpreparedness of so many people to understand dhamma. Dr Suzuki's book is a kind of presentation of Zen - its history, practices, traditions, teachings - to Western readers. Hence the size of the book. I find questionable some methods of Zen teachers, e.g. their liberal use of sticks, or twirling noses of baffled students. But probably our stubborn dependence on logical thinking deserves such treatment. :)

I’m very glad to found this website because; it carries awesome and actually good data in favor of readers.

I really like blogging introduced to get or about some thing I believe throughout. I additionally read reports blogs often and locate that this makes me feel far more intelligent every time I read them.

Smile since it is indeed the best medicine especially to a broken heart and don't stop inspiring us, your readers with your wonderful posts. Visit my site for more information and have a good day. Cheers.

It's enjoyable to learn more and more from your blog. Thanks for sharing.

Love it! Very interesting topics, I hope the incoming comments and suggestion are equally positive. Thank you for sharing this information that is actually helpful.