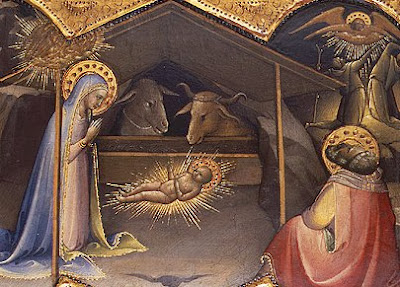 St. Francis of Assisi is credited with creating the first nativity scene in 1223 in an attempt to place the emphasis of Christmas upon the worship of Christ rather than upon secular materialism and gift giving.  The nativity scene created by St. Francis is described by St Bonaventure in his Life of Saint Francis of Assisi written around 1260. Staged in a cave near Greccio, St. Francis’ nativity scene was a living one with humans and animals cast in the Biblical roles. Pope Honorius III  gave his blessing to the exhibit. Such pantomimes became hugely popular and spread throughout Christendom.  Within a hundred years every church in Italy was expected to have a nativity scene at Christmastime.  Eventually, statues replaced human and animal participants, and static scenes   grew into elaborate affairs with richly robed figurines placed in intricate landscape settings.
A donkey and an ox typically appear in nativity scenes. Besides the necessity of animals for a manger, this is an allusion to Isaiah “the ox knoweth his owner, and the ass his master’s crib; but Israel doth not know, my people doth not consider” (Is.1:3). The Gospels do not mention an ox and donkey.  Another source for the tradition may be the extracanonical text, the Gospel of Psudo-Matthew of the 7th century. “And on the third day after the birth of our Lord Jesus Christ, Mary went out of the cave, and, entering a stable, placed the child in a manger, and an ox and an ass adored him. Then was fulfilled that which was said by the prophet Isaiah, ‘The ox knows his owner, and the ass his master's crib.’ Therefore, the animals, the ox and the ass, with him in their midst incessantly adored him. Then was fulfilled that which was said by Habakkuk the prophet, saying,  ‘Between two animals you are made manifest.’”
The ox traditionally represents patience, the nation of Israel, and Old Testament  sacrificial worship, while the ass represents humility, readiness to serve, and the Gentiles. The ox and the ass, as well as other animals, became a part of nativity scene tradition. Other animals introduced to nativity scenes today include elephants and camels. Adapted from Wikipedia.
A peaceful and joyous Christmas to all my readers.
Posted by Shravasti Dhammika at 6:30 PM

Happy Christmas Bhante and thanks for all your posts for the year. The Lord Buddha often said that Dana, generosity, is of great benefit and that it underscores the spiritual Life. How interesting then, that the Christmas tradition of giving and receiving has a profound and beneficial economic effect upon not only Christian communities, but even beyond, by creating a yearly boost to economies the world over. What more proof do we need?

Speaking of animals,the Lion Capitol of Emperor Ashoka was broken by the Indian museum.