Was The Buddha Really A Prince? 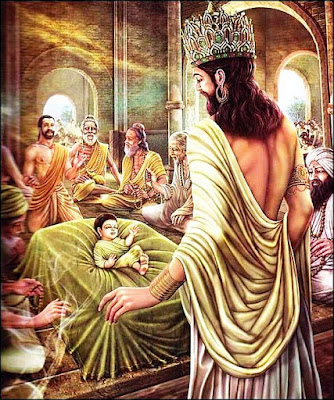 While there are several hundred biographies of the Buddha and his biography is recounted in thousands of books on religion, Indian history, etc. there is still no biography which is based entirely on the earliest records leaving out the later legends and embellishments. If and when this is ever done a very different Buddha would become apparent. Take but one example. Everyone knows that the Buddha’s father was a king and thus that he was a prince. The interesting thing is that there is almost no evidence of this in the Tipitaka.We are told that when the baby Buddha was born the sage Asita went to Suddhodana’s bhavana to see the kumara (Sn.685). The two Pali words here in italics are almost always translated as ‘palace’ and ‘prince’, whereas the first more correctly means ‘a place’  without any regal conotations, and the second means a male child or boy; prince is raja kumara. In every instance when the Buddha talks about his or his father’s abode he uses the words for house, home or mansion, not the usual words for palace; i.e. a royal residence, i.e. vimana or mandira. “In other people’s nivanana the servants, workers and slaves are given broken rice and sour gruel to eat. But in my father’s nivasana they were given the best rice and meat to eat” (A.I,145). “I had three pasada, one for the winter, one for the summer and one for the rainy season” (A.I,145). “At my father’s nivesana lotus ponds were made just for my enjoyment” (A.I,145). In later centuries the word nivasana came to be applied to royal palaces but there is no examples of this from the 5th cent BCE or before and not for quite a few centuries after. Even in the very places where one would expect the Buddha to refer to his father as a king he did not do so. When he was asked by King Bimbisara about his family and birth he simply replied that he was from a Sakyan family (Sn.322-4). 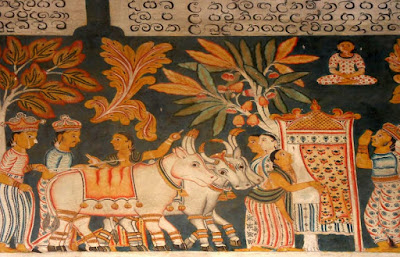 The famous incident where the young Buddha spontainously fell into a jhanic state while sitting in the shade of a jambu tree as he watched his father, is another example of this. Nearly all accounts and depictions of this incident say or show the Buddha’s father plowing, supposedly doing the first ceremonial plowing of the year, what was called mangalavappamangala, Ja.I,57; IV,167). But in the Buddha’s account of this incident he simply says: “I recall that when my Sakyan father was working (pitu Sakassa kammante) while I was sitting in the shade of a jambu tree…” (M.I,246). Now working could mean anything – weeding, mending a fence, milking a cow, picking fruit, etc.  So how did the general ‘work’ become ‘ceremonial plowing’?  I don’t know, but this is what I suspect. In the centuries after the Buddha the claim of royal ancestry was made for him and his father, and of course kings do not do ordinary labor, they only do regal things like ceremonial plowing. Hence work was morphed into royal work
Also interesting is the fact that Suddhodana is only mentioned once in the Sutta Pitaka,   in the Mahapadana Sutta, perhaps the latest sutta in the whole collection, where he is also   said to be a raja (D.II,7). In the Vinaya, most of which post-dates the Buddha by at least 100 years, he only gets a single mention too and he is not called a raja (Vin.I,82). Further, the Vinaya provides us with the only reference in the Tipitaka to a Sakyan  ruler and it is to Bhaddiya, who later became a monk (Vin.II,182).
So was Suddhodana a king, making the Buddha a prince?  Almost certainly not in the sense that ‘king’ and ‘prince’ have been understood for the last 2000 years in both East and the West.  He was probably more like a chief elected by the senior men of the clan. The reference to the Sakyans having a body called the ruler-makers (raja kattaro, D.II,233) makes this scenario the most likely one.
Posted by Shravasti Dhammika at 5:41 PM

I AM HERE TO TESTIFY ON HOW MY HERPES VIRUS WAS CURED BY DR HARRY.
I'm Ashley Burgos, from Texas, USA. I had been in a relationship with a guy and we had unprotected sex for the first time and within a day i got a big bump on the crease of my thigh and vagina. After a few days it began to hurt more and more. I told him to take a picture of it for me, and it looked like open sores, like bugs were biting off my skin or something. So I went to the ER and they said genital herpes. I was soooo depressed. My boyfriend and I cried. He cried for me, but he had no idea he had it too. The next day, the same thing happens to him. At this point, we think I gave it to him because I was the first one to show the symptoms. The next phase I went through was depression. At this point, all I did was sleep and cry. I felt like my life was over. I knew I could never get married, I felt dirty, and worthless. I was depressed for about two months. I fought thoughts of suicide and it was a hassle to even carry out my daily tasks. So I started to wonder if there would be a remedy to this disease, which led me to going to visiting many hospitals, and nothing good came out from it, until I read a person’s testimony online that said that they were cured with the help of Dr Harry, of this disease that the world deems incurable and tears rolled down my face. That person's testimony sparked a hope in me that led me to contact Dr Harry. So he assured us that we are going to be alright, after meeting up with the necessary requirements, he sent us a parcel and gave us an instruction guide on how to use it, which we did, after 7 days of using the medication, the herpes was totally cured. So my boyfriend and I went and got tested for every STD in the book and every single test came back NEGATIVE, we also went back to the hospital, and it was confirmed NEGATIVE. I am posting my testimony to help someone out there suffering from this disease. Do not hesitate to contact Dr. Harry via e-mail: drharryherbs@gmail.com or call him or whatsapp on +2349033111567
website: https//drharryherbs.weebly.com.com
HE ALSO HAS CURE TO THE FOLLOWING DISEASE:
HPV
GENITAL HERPES
TRICHOMONIASIS
CHLAMYDIA
HIV
GONORRHEA
HBV
SYPHILIS
CANCER.