Hoa Hao, A Type of Buddhism


Hoa Hao is a religious tradition, based on Buddhism founded in 1939 by Huynh Phu So, a native of the Mekong River Delta of southern Vietnam. Adherents consider So to be a  prophet and  their sect to be a continuation of a 19th century Buddhist  movement known as Bu Son Ky Huong. The founders of these traditions are regarded by Hoa Hao followers as Buddhas, destined to save  humankind from suffering and to protect the Vietnamese nation.

Hoa Hao claims approximately two million followers throughout Vietnam; in some provinces near its Delta birthplace, as many as 90% of the population practice this tradition. An important characteristic of this movement is its emphasis on peasant farmers, exemplified by the old slogan “Practicing Dharma While Farming Your Land.” Hoa Hao stresses  lay Buddhist practice in the home, rather than focusing primarily on temple worship, monks and ordination. Aid to the poor is favoured over temple building or elaborate rituals; religious and social ceremonies are ideally simple and modest, and  do not  include the food offerings typical of mainline Vietnamese Buddhism, and elaborate wedding and funeral customs found in some manifestations of Southeast Asian life. These are viewed as a waste of money which would be better spent helping the needy. Hoa Hao followers pray morning and night. Separate altars are used to honour ancestors and the sacred directions. Only fresh water, flowers, and incense are used in worship; no bells or gongs accompany prayers. A believer away from home at prayer times faces west (i.e., toward India) to pray to the Buddha. Adherents are expected to attend communal services on the 1st and 15th of each lunar month and on other Buddhist holy days. Hoa Hao has always been very politically active and at odds with most Vietnamese regimes including the French. At one time it even had its own army and administered parts of the Mekong Delta. So was eventually captures by the Viet Minh in 1947 and murdered. Although an officially recognized religion in Vietnam today, many Hoa Hao members resist government attempts to control and interfere with their religion and an unknown number of religious leaders have been detained for this reason. Two Hoa Hao Buddhists self-immolated in 2005 to protest against religious persecution and more recently, after a wave of arrests of Hoa Hao Buddhists, nine more were imprisoned in May 2007. Hoa Haoists do not believe that their founder died under torture. They surmise that he is still among the living. Ceremonies commemorating  his birth are illegal. Many Hoa Hao adherents migrated to the United States after the victory of communism, and there is a large community of them in Santa Ana, California. 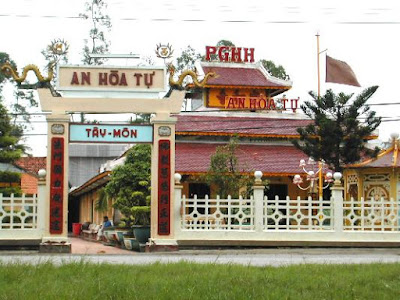 Thank you for this, Bhante!