The establishment of a previously alien religion in a new environment is bound to be one of fits and starts, successes and dead ends, and so it has been with Buddhism in the West. Until fairly recently the beginnings of Western Buddhism  was thought to be fairly clear and well-known, but recent research  has  shed new and unexpected light on this phenomena.

It seems certain now that the first Westerner to ordain as a monk, remain so for an extended period,  and have at least some influence, was Bhikkhu Dhammaloka. His early life and given name are uncertain. He reportedly gave at least three names for himself at different times; Laurence Carroll, Laurence O'Rourke and William Colvin.  He was born in Dublin in the 1850s, emigrated to the United States, and worked his way across the US as a migrant  labourer  before finding work on a trans-Pacific liner. Leaving the ship in Japan, he made his way to Rangoon arriving  in the late 1870s or early 1880s, around the time of the British annexation of Upper Burma. He became a monk sometime before 1899 and started giving public talks a year later. As with some other early Western monks in Asia Dhammaloka urged people to remain true to the faith of their fathers and not be seduced by the enticements of  the missionaries. He told the Burmese that their religion was as ethical, coherent and valid as that of the missionaries, if not more so. Being Irish, Dhammaloka was also decidedly anti-British and he attacked the colonial government at every opportunity, making him something of a hero to the Burmese and an irritation to the British. Touring the country huge crowds assembled to listen to the white monk who lauded rather than disparages the Burmese and their religion. In 1907 Dhammaloka founded The Buddhist Tract Society which during its existence published numerous books and booklets on the Dhamma. His anti-British comments eventually led to Dhammaloka and some of his supporters being charged with sedition, found guilty and fined Rupees 1000 each. Dhammaloka left Burma shortly after and disappeared from history. He is thought to have died in 1914. 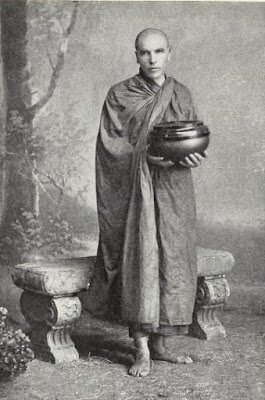 More well-known successors to Dhammaloka were H. Gordon Douglas (Bhikkhu Asoka) formerly head of   Mahinda College in Ceylon who ordained in   February 1899  and died of cholera in Burma in April 1900;  the Scotsman  Allan Bennett (Bhikkhu Ananda Metteyya) ordained in Burma in May 1902 and founder  of  the International Buddhist Association and  Buddhist Society of Great Britain and Ireland. He died in 1923; Anton Gueth (Ven. Nyanatiloka) of German who was ordained in Burma in 1904 by Ananda Metteyya and lived much of the rest of his life in Ceylon; and J. F. McKechnie (Bhikkhu  Silacara) who ordained as a novice in July 1907 in Rangoon. After disrobing in 1925  McKechnie  continued as editor of The British Buddhist for many years. However, recent research has uncovered a surprising number of other Westerners who were drawn to the Buddhist monkhood  before these pioneers. In the 1870s a destitute Russian became a monk in Bangkok and in 1878 an Austrian man is reported to have ordained in Bangkok. Nothing more is known about these two individuals. In June 1892 a Mr. MacMillan arrived in Ceylon from Scotland and ordained under the name Sumangala. Records from Japan show that a Dr. Norman, “a well-known Englishman” became a monk there in 1900. A Jewish man named Arnold Abraham or Abrams who had lived in the Straits Settlements in Malaya ordained in Rangoon in June 1904 and took the name  Dhammawanga. M. T. de la Courneuve was ordained as a novice by Dhammaloka under the name Dhammaratana in Singapore October 2nd 1904.  He was an ex-Inspector of Police, Pahang, Straits Settlements in Malaya and his father had been a Deputy Commissioner in the Burmese Civil Service. An individual named C. Roberts, a  Welshman who is said to have spoken  spoke with an American accent,  ordained as a novice probably in Rangoon in 1904. He disrobed in October 1904 after receiving a remittance from parents. He may have put on the robe simply because he was without money. An American sailor whose name has not been recorded  ordained in Burma and in 1905 was residing  in the Tavoy Monastery in Rangoon. Others who have come to light include Frans Bergendahl (Sunno),  a 20-year-old son of a wealthy Amsterdam merchant and  a German Mr. Stange (Sumano)    who were both ordained by Nyanatiloka in 1906. Sumano died in 1910 and Sunno  died in 1915. An Irishman whose lay name is unknown took the name Bhikkhu Visuddha  and was  involved in mass conversions of  untouchable mine-workers in Marikuppam in India in 1907-8. Nothing else is known of him.  A Mr. Solomon  became a   novice in Burma  in 1907  but was disrobed shortly after for breaking rule about drinking alcohol. The German Walter Markgraf became a novice under  Nyanatiloka in 1907 and disrobed half a year later. E. H. Stevenson born in the UK in 1863 ordained under the name Sasanadhaja in Burma in September 1908 and is mentioned as giving lectures lectures in Australia on a tour as a missionary for Buddhism in 1910.
As with most of these others we have only the barest information about these pioneers, mainly from incidental sources. Because of lack of information it is difficult to know why these men took, what was then such an unusual step and why they eventually disrobed. No doubt some were at a loose end or were eccentrics, others may have developed a fascination for Asian culture and wanted to experience it form the inside.  Cardinally all of them would have found the climate and food in the tropics challenging, and Asian Buddhist norms so different from their own, and this probably explains why so few of them lasted long in the robes. One who did survive and indeed flourish was Captain Charles Pfoundes.
Up until recently it has been widely accepted that the British monk Ananda Metteyya’s (Allan Bennett’s)  founded and organized the first  Buddhist mission to the West in London in 1908. Recent collaborative research by historians in Japan and Ireland however has shown that this assumption needs to be revised. In fact it was not Theravadian but rather Mahayana Buddhists who were the first to try to teach Buddhism in the West. In 1889 the Japanese-sponsored  Buddhist Propagation Society  (BPS) of Japan  launched a mission  to London  led for three years by the Irish-born Buddhist Captain Charles Pfoundes.
Posted by Shravasti Dhammika at 5:55 PM

The first modern Western Buddhists! However if we count ancient Greeks as Westerners,there were certainly hundreds of them in the Bactrian and indo Greek kingdoms!

Dear Javi, so it is sometimes said. But facts on the ground are very hard to find, and actual names even more so. Can you give me a quote from a reputable historian? King Asoka mentions that he sent a mission to the West but we have no record that they it ever actually got there. However, I’d be quite happy to amend the title of my blog post to ‘The First Western Buddhist in Modern Times.’

How about King Milinda? Wasn't he Greek? Or perhaps part Greek?

Dear David, the original discussion was about early or the first Westerners who became monks and/or let missions to the West. King Milinda is not known to have been a monk or to have done anything for Buddhism in the West.

Dear RR, as mentioned above, the disgussion is a about westerners who became monks Mr Rhys David never became a monk, and I’m pretty sure Mrs. Rhys David couldn’t have becomes a monk even if she had wanted to as she was a woman.