Religion And The US Elections 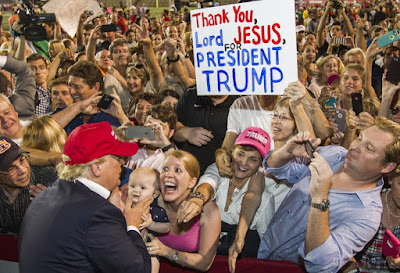 Studies have shown that some 40% of Americans attend church regularly although another study conducted from the 1980s  to the present has shown that it might be only half that.  Nonetheless, even 20% is high when compared to other developed countries. And in survey after survey Americans assert that they have a deep commitment to religion, even when they do not go to church regularly. Some denominations are more pious than others. Amongst Mormons 67% say they attend church once a week or more, and 89% say they pray daily.  Controversies over issues that overlap on religion are  regular occurrences in America and you haven’t a chance of winning an election, local or national, in the country unless you  claim to be “a person of faith”.
I bring this up because of the US presidential election which is to take place in a few days. Even a casual observer like myself cannot but be dismayed  by how much rancour, bitterness, calumny and mutual recrimination  have marked this election. Mr. Trump, who says the Bible is his favourite book, seems to be the worst offender, Mrs. Clinton much less so. But the supporters of each have pulled out all stops in their efforts to bad-mouth their candidate’s opponent. The book many of them claim to read and guide their lives buy is pretty clear, “Thou shalt not avenge, nor bear any grudge against the children of thy people, but thou shalt love thy neighbour as thyself” (Leviticus 19:18) but not much notice seems to be taken of this or other biblical teachings. The advocacy group Grass Roots North Carolina, operating in the so-called Bible Belt, is holding a competition to raise funds for Mr. Trump; first prize being a AR15 rifle, a thousand rounds of ammunition and a target with Mrs. Clinton on it. Mr. Trump has been married three times, his many adulterous affairs are common knowledge and yet this  and recent revelations about his sexual advances towards woman have caused only a slight drop in support for him by evangelicals who always say how concerned they are about “family values”.
I have long  given thought to what statements such as “I’m very religious”, “I believe in (fill in the gap)”,  “I’m a man of faith”, actually mean or what they might tell us about the persons making them, whatever their religion. Generally I have come to the conclusion that they don’t mean very much and they tell you almost nothing about how those persons might behave in the ordinary process of living. It seems to me that considerable numbers of people who think of themselves as religious take their belief mainly as a sort of totem, a peg to hang  their identity on, as notions that give them comfort or a feeling of belonging, as something to cling to, rather than as instructions about how to behave, particularly towards their fellow human beings.
As far as I can see, when a religion, any religion, is thought of as a social necessity the way Christianity is in the US or Buddhism is in Sri Lanka, etc;  or when it is made compulsory as it is in parts of the Middle East, it does not make people pious, it just makes them  hypocrites. And when religion  gets  involved  in politics  the religion concerned and the individuals who do it are usually both discredited.  I think  genuine religiosity flourishes best when it  remains a matter between the individual and his or her conscience. And people who spend more  effort removing the beam from their own eye rather than trying to push their faith in the public domain are likely to be the least hypocritical.
Posted by Shravasti Dhammika at 3:59 PM

Spot on. The way the unawakened human mind works is very appalling, I find.
All the best.

Knowing many Christians who are as appalled at Trump as we are distressed by Wirathu, the firebrand nationalist monk in Mandalay, we found this thoughtful, )and please note it is from early days in his campaign, with so much ugliness, hatred, and stupidity to follow!) Thanks be to heaven it is almost over.