From Killing Fields To Heaven 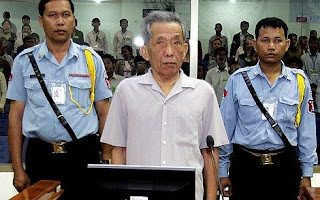 Guek Eav Kiang, alias Comrade Duch, is a nasty piece of works by any standards. He is charged with 'personally overseeing the systematic torture and killing of 15,000 people' at the notious Tuol Sleng prison in Phnom Penh during the Khmer Rouge period and we await the court's verdict. When I visited Tuol Sleng a few years back I noticed a slight but distinct smell emanating from the wooden partitions that divided one prisoner's space from another. It smelt like a combination of sweat, cold vomit and marigolds. 'Where have I smelt that before?' I asked myself. Then suddenly it came to me. It is the same odor I had smelt in the barracks at Sachsenhausen Concentration Camp outside Berlin - and it is the smell of terror. Whatever Comrade Duch's future here on earth, paradise awaits him in the next life. You see, Duch is saved; he has become a 'born again' Christian. In fact, he was working with the Christian aid organization World Vision when he was identified and arrested. During his trial, he tearfully said he was sorry for what he had done, an admission that was, like his conversion, apparently genuine. It must be very comforting for him to know that despite his monstrous crimes, he, unlike his Buddhist and communist victims, is destined for eternity in heaven. No doubt he will enjoy it. 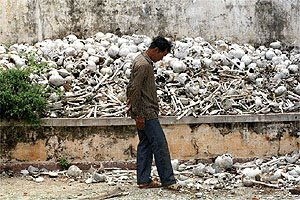 Posted by Shravasti Dhammika at 1:23 AM

The heavens are & will be full of criminals, underworld bosses, murderers & drug cartels! Why?! 'Cause they have been "saved by the Saving Grace of Jesus"!

Doesn't Buddhism also teach that at the moment of death if one is in any of the jhanic states that they will be reborn in one of the heavenly realms? So if this guy became a Buddhist and did this, wouldn't he also enjoy the blissful states in an upper realm? And if he also happened to reach Nibbana before the fruition of his kamma, wouldn't he also escape the torments of the Buddhist hells?

I would think that the quality of his conversion is proven by the fact that he did not give himself up for his crimes and was hiding under the guise of a Christian aid-worker.

One wonders whether his conversion to Christianity was of genuine conviction or of convenience. If it was genuine, then that's what rehabilitation of criminals are about, that is to salvage destructive individuals and turn them into persons making positive contribution to society. This is true not of Christians but also of Buddhists working with criminals.

As to how kamma plays out, I think we are too ignorant on the matter to know.

There is a story, if I remember correctly, in the Suttas about a murderer who became enlightened after hearing a discourse by the Buddha. But of course we don't know whether hardened crimals who tortured and murdered tens of thousands could "see" the light as easily. But we are in the realms of speculation?

Dear Jamie,
The theory that the last thought moment determines one’s future rebirth is a much later and, to my mind, a highly doubtful development within Buddhism. Go to www.buddhismatoz.com and look up ‘Last Thought Moment’
Dear No,
You are referring to the story of Angulimala, a sort of 5th century BC ‘Comrade Duch.' Angulimala only attained enlightenment after having become a monk and only after ‘dwelling alone, withdrawn, and being diligent, ardent and resolute’ (M.II,103). And even after that he was by no means ‘off the hook’ kammicly. When he would go for alms gathering people threw stones at him, beat him and abused him and he sometimes returned to the monastery with his robe torn and covered with blood (M.II,104).

Dear Venerable,
Thank you for informing me of the Angulimala Sutta. I have reread it from the web (translated from the Pali by Thanissaro Bhikkhu. Access to Insight, June 7, 2009). It has so much drama, and recorded an incident (rare?) where the Buddha perform a "miracle" of psychic power to provide the situation to "open the eyes" of Angulimala and "convert" him. I also read from Wikipedia that the story was actually made into a movie in Thailand!

Dear No,
I am unfamiliar with the Thai film but the Bollywood version used to be one of the banes of my life. One of the songs from the film, sung in a gruff male voice to high-pitched music, had the
refrain ‘Buddhm saranam gacchamiiiiiiiii’ When I lived in Sri Lanka, the nearby temple used to play this song at maximum loudness over and over again every full-moon day. But my therapist says I’m getting better nowadays.