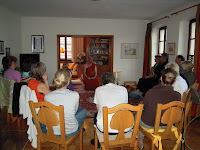 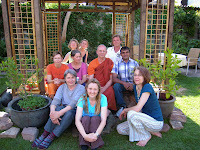 My recent trip to Europe was both fruitful and enjoyable, a chance to do a bit more a bit less work, a bit more meditation, to re-connect with old friends and make new ones. I arrived in Frankfurt and then went to Euerdorf near Wurzburg and stayed with my good friend Ingrid Baum. There I did two weekend meditation courses and gave several evening talks, went for walks in the forest and delighted in the blackbirds’ songs at twilight. I also took a few day trips. The highlight was seeing magnificent altarpiece at Munnerstadt and the beautiful baroque cathedral at Fulda. I also visited the lovely medieval Franciscan monastery at (I can’t remember the name of the place) but was unable to meet any of the monks – they were preoccupied with making beer and selling it to the tourists!
Then I spent a week in Frankfurt enjoying the hospitality of Herbert Rusche, an old radical, former green member of the Bundstag and now council member of the German Buddhist Union. I have never met Herbert before but we hit it off well from the beginning. Herbert showed me around the city and arranged a few talks for me as well. While in Frankfurt I also met the nuns at the Fu Kwan Shan centre, the monks at both the Sri Lankan and the Burmese temples and made acquaintance with the Israeli monk Phra Ofer Adi who happened to be on his annual visit to Germany. I also went up to Kevelaer near the Dutch border and spent two most pleasant days with publisher Michel Hellbach and his family at his beautiful farm. Michel publishes those great Buddhist calendars (see www.tishita.com/catalog-us/). 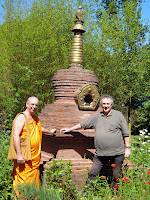 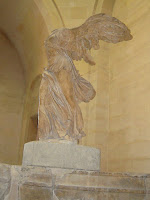 Then it was off to Paris to meet my youngest brother Charles who I have not seen in seven years. We had the use of a flat in the city. We went out early each morning, saw the sights, returned at about four for a rest and a shower, and then went out again until dark, which at this time of the year in Europe comes down at about 9.30. I had missed the Louvre last time I was in the city and was determined to see it this time. Now there is one serious problem confronting anyone visiting the Louvre – that being what to see, given that there is just so much. I had already settled on the Egyptian, Greek and Roman collection topped off with a quick peep at the Mona Lisa. Several hours left me utterly satiated and ready to leave. But as we made our way to the exit we passed by the Mesopotamian galleries. Suddenly my feet were not so tired anymore and we postponed our departure and went there too. In the next few days Charles showed me the other sights (Place de la Concorde, Notre Dame, the Left Bank, the Eiffel Tower, the Hotel des Invalides, Arc de Triomphe, Sacre-Cour) and tried to shield me from rude waiters. I wanted to visit Musee Gilmant and Musee Albert Kahn but time didn’t allow. Next trip. Then we took the train to Renne in Brittany where I spent a most pleasant, peaceful and relaxed eight days being treated to superb French cuisine by Charles’ wife Catharine and getting to know my little niece Sophie. We took several trips out of Renne, the being to Bayeax, because I have always wanted to see the famous tapestry. We avoided Caen because Obama was due the next day and we didn’t want to get delayed by tight security.
Okay! Now its back to the treadmill. Er, sorry! The Dhamma 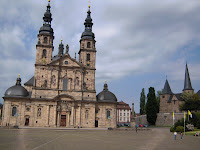 Posted by Shravasti Dhammika at 3:33 AM

That was a great trip!

Dear Riglin,
It is the Nike (winged victory) of Samothrace in the Louvre. While she was 'just doing it' she lost her head.

Dear Bhante,
we ate together in Frankfurt and I believe now that you are a Mahayana monk in a Theravadin's disguise ;-). Therefore I have a question concerning the Vinaya which prohibits talking about inside problems of the order to "non highly ordained":
Can a bodhisattva from the Mahayana tradition be considered "highly ordained" by a Theravada monk even if he just took the bodhisattva vows (and not the Vinaya)?
(Sorry, haven't found your email here. P.S.: It is "tUshita" in the link and Fo Guang Shan for the Chinese temple. Took me six months to get it right myself.)
Gasshô
Guido

I went to post the message below to an old blog entry of yours on the AWARE saga and after that I realised it... so I am re-posting here so that you may notice it.

May I know what is your email address so that I can write to you? I am a Christian who reads your blog regularly and I too am concerned, in fact very concerned, that the AWARE Saga is only the tip of an iceberg. I wish to communicate with u privately on this matter. (Though not a Buddhist, I have an interest in Buddhism and have been reading Buddhist academic books for years. Not that I am thinking of becoming a Buddhist, but I do find many things I can learn from Buddhism even though at the moment my subjective assessment of probability of worldviews still makes me continue as a Christian)

Dear Thinker,
Please feel free to contact me at pitijoy@yahoo.com

Hey Bhante, good to hear from you again. Pretty full trip. Pity you didn't make it to Berlin this time. Do let us know when you're coming! (If it's anything to tempt you: Berlin's Neues Museum, recently reconstructed, will re-open in October:-)

For a Christian, perhaps he would be admiring and humbled by the wonders of God's creation and, in turn, the creations of the crown jewel of God's creation, namely Man. But his admiration would perhaps be tinged with a certain sadness that "sin" has "entered" the world and spoilt God's marvellous creation... but he is thankful and filled with joy that God has acted to salvage both Man and Creation...

In contrast, what would the Buddhist be thinking? I wonder. Perhaps not too differnt from that of the Chistian, only substituting a few categories with Buddhist ones. He can marvel at Nature and the creations of Man's ingenuity, at how much is still a mystery to his puny, deranged and unenligtened mind. He can reflect mindfully on how "greed" has "spoilt" a very beautiful Nature... but his mind is delighted by the path of the Dhamma...

I read your blog from time to time but haven't commented until now. How interesting that you met Herbert Rusche. He's an old aquaintance from the 80's, and is one of the unsung heroes of German progressive politics. He was the first openly gay member of the Bundestag, and also played an important part in Buddhism's being made one of Germany's official religions, and thus elligible for government funding.