The legends, folk tales and hagiographies of most religions include stories in which saints or sages interacted with animals, sometimes even to the extent of them talking to each other. Saint Jerome and the lion, St. Anthony and the crow and St. Francis and his audie 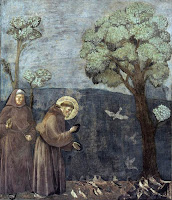 nce of fish and birds are the most well-known such stories from the Western tradition. Most such stories probably have their origins in a naïve understanding for animals but others may be based on at least some experience. Some higher animals are known to exhibit the rudiments of traits like gratitude, affection, loyalty and reciprocity. Likewise, some animals are able to sense certain emotions in humans, especially strong ones like love and fear, and be affected by them. Saints and sages also often lived in wilderness areas where the wildlife would gradually grow used to their presence and lose their fear of them. Visitors would see this and assume that the hermit and the animals has had developed some kind of relationship with each other.
The Jatakas contain numerous stories in which humans interact in a variety of ways with animals, including speaking with them. The Tipitaka also included several such stories. Once Venerable Sariputta was suffering from fever and Venerable Moggallana offered to get him the medicine he required – lotus storks. He went to a great lotus lake, an elephant saw him and asked him if he could help him. Moggallana told him what he needed and the elephant instructed another elephant to get it. This second elephant uprooted a trunk-full of lotus stalk, washed the mud off them, tied them into a bundle and then gave them to Moggallana (Vin.I,214). Another story of animal helpfulness to humans is told in the Udana. The Buddha left Kosambi in d

isgust at the quarrelsome monks there and went to a nearby forest where he spent a few days staying at the foot of a sal tree. The elephant who lived in the forest cropped the grass around the Buddha and brought him water in its trunk (Ud.41). The ancient commentary adds that a monkey also brought him fruit to eat (Dhp.a.59). Like the former story, this one is about animals being kindly and helpful. But it also adds the idea that noble beings (enlightened sages and great elephants) share a common appreciation for silence and solitude.
A monk once told the Buddha he was being disturbed by a large flock of birds roosting nearby. The Buddha advised him to go to the birds three or four times a night and ask them for a feather. The birds would, he said, soon get sick of his continual request and go somewhere else. The monk did as he was advised and sure enough, the birds left (Vin.III,147). The Buddha used this incident to warn monks not to be always asking lay people for things (Vin.).
Stories based on the assumption that animals will respond to human kindness and love are very common in the Buddhist tradition. The most famous of there is the Buddha/Nalagiri incident Once, in an attempt to kill the Buddha, his evil cousin Devadatta arranged for a dangerous elephant called Nalagiri to be released onto the road he was walking down. Tail erect and trumpeting, the elephant charged the Buddha who, on seeing the furious creature coming, suffused it with metta. The elephant was suddenly transformed from fury into docility. It approached the Buddha and he stroked its head (Vin.II,195). When the Chinese pilgrim Fa-hien was in Sri Lanka in the 5th century he visited Mahintale. While there he was told of a monk who shared a cave with a mouse and a snake. Normally natural enemies, the mouse and snake lived in harmony with each other, so effected were they by the monk’s loving-kindness.
Posted by Shravasti Dhammika at 12:14 AM

In modern times there has been a truly remarkable book about the Sri Lankan monk Ven Anandasiri who lived in remote areas of the country and had many encounters with wild animals, who were no longer wild in his presence.

Called 25 years of Life in the Jungle, only the first volume was made available in English, the 2nd is in Sinhala. The 5,000 acre cave monastery Kudumbigala, which he either founded or reopened, is one of the most remote in the country.