DONE THE BARS? BEEN THROUGH THE GOLDEN TRIANGLE? SEEN ALL THE LADY BOY SHOWS? WHY NOT CONSIDER BECOMING A MONK? YES, YOU TOO CAN TOP OFF YOUR HOLIDAY IN EXOTIC THAILAND BY PLAYING AT BEING A MONK. WE OFFER AN EXCITING RANGE OF MONASTIC PACKAGES AT ATTRACTIVE PRICES TO FIT ANY BUDGET. EXCELLENT FOOD, GREAT PHOTO OPS, GUIDED TOURS IN THE AREA – AND YOU DON’T EVEN HAVE TO BECOME A BUDDHIST. FOR BOOKINGS AND FURTHER INFORMATION PLEASE GO TO http://www.monkforamonth.com/ 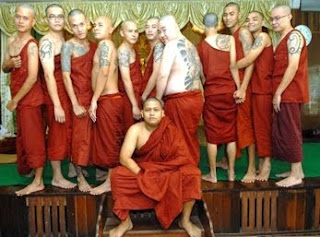 Yes, me too. At first I honestly thought it was a joke as well. But then, one sometimes gets the feeling that much of Buddhism in Thailand is a joke. What is more interesting is that the organization that runs this mock-monk program, The Blood Foundation, has a distinct Christian leaning. One of its two published donors, the Partners Relief and Development and the Khom Loy Development Foundation, is strongly Christian. These donors in turn receive support from Christian organizations like the Mekong Minority Foundation and controversial groups like the Richard Haugland Foundation; see http://portland.indymedia.org/en/2007/06/361357.shtml. This is not to say that all Christian aid organizations have a conversion agenda, but many do, and sometimes it’s carefully concealed under the guise of ‘development’, ‘cultural exchange’ and ‘leadership programs’. This way they get brownie points for doing good, receive donations from people who wouldn’t usually give to missionaries, get help from volunteers unaware that they are helping to evangelize native peoples, and make converts too. A hundred and fifty years of conventional evangelism in Thailand has produced a very merge harvest so ‘development’ has become part of the new strategy. Conventional missionaries are not allowed to operate in Burma so now Burmese refugees in Thailand have become the ‘target people’ like the hill tribes before them. And it’s mainly financed by good-hearted folk in the West unaware of the hidden agenda. And the Buddhists? Not savvy enough or concerned enough to worry too much about it. After all, everything is impermanent, isn’t it.
Posted by Shravasti Dhammika at 12:23 AM

Hi there! Thought you might wanna blog about this: http://www.temasekreview.com/2010/02/07/lighthouse-evangelism-pastor-rony-tans-comments-on-buddhism/

Thanks again for the great blog

I am puzzled by the repeated denigrations on this blog about Thai Buddhism. There have been some great paragons of the dhamma in Thailand, such as Buddhadasa and Sulak Sivaraksa. Indeed, I have sometimes heard Thai monastics lamenting the corrupt, superstitious forms of Buddhism they see in other Theravadin countries. It just doesn't seem likely to me that Thailand is any better or any worse than Sri Lanka, Singapore, or any other Buddhist country for that matter in this regard.

Dear Scott,
Please let me try to resolve your puzzlement. Perusing Buddhist internet sites I notice pretty much the same info or the same issues being discussed. I do my best to post info and news or look at issues that are not well-known or that are usually ignored. Sulak Sivaraksa, Buddhadasa, the great Thai masters, etc, are all very well-known and get very wide coverage on the internet, in books, in general discourse, etc. I honestly can’t think of anything to say about such people or institutions that has not already been said many many times before. I agree with you that the state of Buddhism in Thailand is not much better or worse than in other countries. The problems of Thai Buddhism gets some coverage on my blog for no other reason than that I happen to find this info more easily. Give me news from Sri Lanka, Burma, Cambodia, Korea, etc and I’ll be more than happy to post it. Just make it something that is not already circulating widely on Buddhist websites. Also, I favor the quirky, the unusual, the inspiring and the reality-based. Hope to hear from you.

Let me try to post a reference to something not everyone has read of or "that is not already circulating widely on Buddhist websites" (that I know of): http://www.buddhistchannel.tv/index.php?id=56,8918,0,0,1,0
Please allow me to copy it in the following.

TAIPING, PERAK (Malaysia) -- A Thai monk walks 20 kilometres on barefoot a day to remind those who pursue a material life to protect and concern about mother nature.

Master Jinshen started his journey from Hat Yat and arrived at Simpang on Sunday (31 Jan). After staying in Simpang for a night, he started to walk again the next day. He was heading to Singapore, Indonesia and Australia.

He stressed that his main purpose is to practice Buddhist rules and at the same time, lead the people to the path of virtue. It is also meant to develop the Buddhist spirit.

When he was staying in Simpang, he urged everyone to concern about and appreciate mother nature. Also, he promoted an environmental friendly and simple lifestyle of eating and consuming less but to walk more.

He said that he had visited many countries, including Thailand, Laos, Vietnam and India over the past 30 years. And he walked more than 10 thousand kilometres every year.

"Not many monks live an ascetic life nowadays. That's why everyone looks at me with curiosity as they think ascetic monks can only be found in books," he said.

He also said that he walks five to six hours for more than 10 kilometres everyday. He has no money but a lot of people give him alms. Although his soles are blistered and painful, he feels happy.

"Some people work hard everyday to earn money in order to pursue a material life. They destroy natural resources but they are not truly happy."

He said that it is applies to human relationships, too.

"As long as you treat others friendly and reduce hatred, you'll get a peaceful mind in return," he added.

He also advised people to be vegetarians for health purposes and to reduce killing lives.

Humm, well, in spite of the articles' calling him "Thai monk", Master Jinshen does not look (and sound!) Thai: http://www.mysinchew.com/node/35131 Does anyone know more about him?

I am the Dhamma teacher for the MonkforaMonth program. You can get a much more detailed perspective from the monk for a month Facebook pages. Only those who make judgements from afar seem to have problems with it. Those who have actually attended find much of value and take away life-changing experiences. I agree the title is a bit gimmicky...but that is not my problem...anyone who does enough research understands that it is only novice ordination which is offered.

Nice writing but a poorly researched article in which the author clearly knows not what he's speaking about.

You can read about actual Guest experiences from the Monk for a Month program here http://monkforamonth.com/guest-experiences.

Blood Foundation is based on the philosophy of the human family, we work with Buddhists, Christians, Secular people and in principle anyone who is committed to improving our world.

The world is changing, old stereotype are passing away. Dare to go forward with an open mind and heart.