Turning Over The Bowl

The Buddha conceived the monastic Sangha and the lay community as ‘living together in mutual dependence’ (annamannam nissaya, It.111). Monks and nuns usually took the role of teachers of the laity but sometimes this situation was reversed. The lay man Citta for example, was learned enough and skilled enough in Dhamma to teach monks (S.IV,282-8). The Buddha also understood that there might be times when a monk’s or nun’s behavior might warrant reproof f 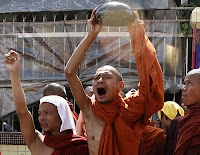 rom lay people or visa versa. He said that lay people could express their disapproval of monks or nuns by refusing to give them food when they came alms gathering. According to the commentaries, when the monks of Kosambi were locked in an unseemly squabble, the lay people decided to ‘neither give them salutation nor gestures of respect or offer them alms when they come to us’ (Ja.III,409), which very soon brought the monks to their senses Likewise, monks and nuns may express their disapproval of a lay person by ‘turning over the bowl’ (pattam nikkujjeyya), i.e. refusing to accept their alms. The Buddha gave the conditions whereby monks could consider doing this, all of them concern disadvantaging the Sangha (Vin.II,125).
However, a monk may also decline to accept a lay person’s alms if he knows that it has been obtained by immoral means. I know of a gentle, meditative, forest-living monk in Sri Lanka who turned over his bowl when the a local man tried to give him some food which included venison. He knew that the man was a poacher illegally hunting deer in the nearby forest reserve. The man’s wife was so angry at her husband for causing the family such humiliation, and scolded him so severely, that he stopped pouching. During the 2007 protests in Burma, many of the more aware monks refused to accept alms from the families of government officials, soldiers and even senior members of the military junta. One particular general was so incensed by this (in most Buddhist countries it would be considered the ultimate insult) that the had the offending monks’ monastery surrounded by police who refused to let the monks out and prevented anyone bringing food in. After two days of this the monks had to give in and the general and his pudgy, bejeweled wife turned up with a retinue of flunkies, all looking very self-conscious, and offered food to the monks, who accepted it with unsmiling faces. Less well-known or revered monks bravely did the same thing and were beaten up for it.
Posted by Shravasti Dhammika at 12:06 AM

Thank you for this! A group of Burmese monks staying in Sri Lanka recently refused the gift of $200 each offered by Gen. Than Shwe when he visited Colombo. They observed that the almsbowl remains overturned and that they were sure that the money wasn't his to give anyway.