The Buddha In Ballarat

Years ago I was giving some talks in Ballarat in rural Victoria and staying with my long-time friend John Hall. One afternoon he suggested we go and visit the Ballarat Fine Art Gallery. I was agreeable to this suggestion although I wasn’t expecting much. Probably a small collection of modest and mediocre works by locals artists, I thought to myself. I ended up being pleasantly surprised. They have paintings by Arthur Boyd, Russell Drysdale, Fred McCubbin, Sidney Nolan and quite a few other fine artists. But one painting surprised me more than all the others and has remained in my memory ever since. It is a large painting called Buddha’s Renunciation by the Anglo-Russian Nicholas Chevalier who lived in Australia for 14 years. The ‘Buddha’ seems to pop up in the most unexpected places! 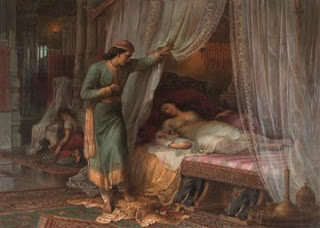 I don’t know much about this work other than that Chevalier painted it in 1884. As Edwin Arnold’s famous poem The Light of Asia was first published in 1879 there is a good chance that it served as Chevalier’s inspiration. Buddha’s Renunciation is rather typically Victorian – romantic, sentimental and naive, but it is also pleasing to the eye. Anyway, it’s been in the Gallery’s collection since 1923. That means that for 87 years Ballaratins (if that’s what there called) have been able to have at least a little bit of Buddhism in their lives.
Posted by Shravasti Dhammika at 4:26 PM

One would think that perhaps the Devas had a message for you, through your good friend John Hall, about the essence of Buddhism, renunciation, or letting go, and who would believe that an innocuous place like Ballarat could be the location for such a message.

Although it may first appear otherwise, the painting itself, along with Ballarat and the Fine Art Gallery, is no doubt inconsequential.

Just showing perhaps that there are two ways of interpreting events.