Of Aryans, Nazis And Buddhists

In a comment to my post of the 23rd David asked if I could say something about the Pali Buddhist term ariya, which congers up images of Nazism and its idea of so-called Aryan superiority. So hear goes. The Vedic Sanskrit word arya first appears in the Rig Veda (2000-1500BCE) where it is used as the name of a group of people who had migrated into India from perhaps what is now Iran (from arya) in prehistoric times and gradually subdued the aboriginals who they called dasa or dasyu. Like most peoples, the aryas saw themselves as superior to others and the word arya gradually came to mean ‘noble’, ‘esteemed’ or ‘superior’. By the time of the Buddha the word had come to include the idea of ethical or intellectual excellence and the Buddha always used it in that sense. Thus in the Tipitaka we have terms like Ariya sacca = Noble Truth, and many others.
When Sanskrit and Avestan studies began in Europe in the late 18th century the word arya was noticed and came to be used for the family of languages we now call Indo-Iranian, i.e. most Indian, Iranian and European languages, and by extension, the people who spoke those languages. Europeans, particularly blue-eyed, blond-haired ‘Nordic’ peoples came to be seen as the ancestors of the ancient Aryans who had conquered India in ancient times, just as the British had conquered India (and half the rest of the world) in the 19th century. Thus the word took on a distinctly racist and imperialist coloring. By the late 19th century such an association was being discarded in scientific circles but among ill-informed people and especially among the more loony right-wing groups, particularly in Germany, it lingered. Hitler picked it up and the rest is history, very ugly history. As Nazism perverted everything it touched, it likewise gave the word arya/ariya something of a bad reputation. But of course, no informed person could find any similarity between how the word was (and sometimes still is) used by racists and how it is used in Buddhism. For all the uses of ariya in the Tipitaka have a look at the PTS’s Pali-English Dictionary and their new A Dictionary of Pali. The article ‘Arya’ in the Encyclopedia of Buddhism examines the use of the word within the wider Buddhist context and the article ‘Aryan’ on Wikipedia gives a pretty good account of the words use in philology and politics. 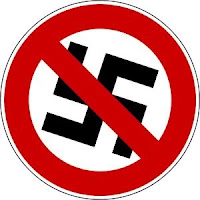 The Aryan race myth was never more effectively discredited than by those who loudly proclaimed it, not just in their behavior but even in their looks - Hitler with his sickly yellow skin and black hair, the grotesquely obese Goring, Dr. Gobbles with his club foot, cadaverous features and beak-like nose, the offish bald-headed Julius Streicher with his paunch, and the weakly, shortsighted Himmler. It’s hard to decide which of this bunch of Aryan supermen was the worst but if I was forced to choose I’d probably pick Julius Streicher. Even the other Nazis found him repulsive (although characteristically Hitler always liked him) and in 1940 he was quietly sacked and told not to attend any more Party functions. God! How unsavory would you have to be to be blackballed by the Nazis!

Related to this, the swastika, so often associated with the Nazis, has been used in Buddhism (and in nearly all cultures and religions) for centuries. Here is carvings incorporating swastikas on the Dharmik Stupa at Sarnath where the Buddha taught his first proclaimed the Dhamma. 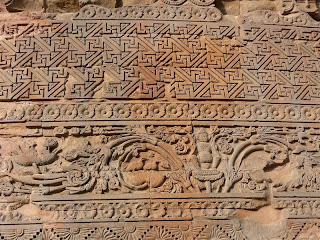 How do buddhist countries, or their official doctrines that are in use in public education systems, regard the human evolution? For example as it is described in the wikipedia article of that title, Human evolution ? Is it accepted or not ?

Dear Gustav,for a short answer to your question have a look at http://buddhismatoz.com/e/Evolution.html

Glad we arrived somewhere else other than swastikas.

What is interesting about evolution according to Buddhism is that it is the evolution of mind, as distinct from the purely materialistic view of genes and arm pits. Thus, we evolved from the minds of single cell monsters.

Perhaps you might find the idea of ‘higher evolution interesting. See http://en.wikipedia.org/wiki/Higher_evolution

Am I right that the Buddhist swastika and the Nazi swastika are in opposite rotational direction?

To the best of my knowledge there has never been an ‘official’ committee, assembly or body that decides what would or would not be a ‘Buddhist’ swastika. Artists and their patrons usually followed current trends and traditions and perhaps sometimes broke away from the norm and tried something different. However, in nearly all cultures the right has always been considered more auspicious so most swastikas I have ever seen in Buddhist art have turned to the right – although not always. On the ‘right’ see
http://buddhismatoz.com/r/Right.html and also http://buddhismatoz.com/s/Svastika.html
Note that the swastika in this picture turns to the left.

The answer in the A to Z buddhism is not at all satisfactory, I think you could do better that that. What do they exactly teach about evolution and human evolution at schools in SriLanka, Singapore, Indonesia and elsewhere ? Has no official buddhist Sangha given voice to this question?

Dear Gustav, sorry I have been unable to live up to your high expectations. Must be all that Stalinist influence. I really don’t know what they teach about evolution in Sri Lankan, Indonesian, etc. schools. I imagine they teach standard evolution in their biology classes. However, I’ll scan the internet and see if I can come up with something that might answer your question.

Thank you! A thought came to me: Is species a kind of form (rupa)? Like man and woman that are counted as form, species would be form on the same level of abstraction? Then while form is impermanent(and empty) it follows that it has a beginning and an end, an origin and a cessation.
Do you understand the fourth nidana, name and form, of the pratitya samutpada as including and denoting all different species?

The word Arya found in the Vedas describes former inhabitants of the western European countries from previous yugas, Treta Yuga and Dvarpa Yuga.
It is believed Arya peoples followed sanatana-dharma or upheld spiritual laws within their societies. However the Arya migration to the East is not factual, indeed this is the belief the Nazis hijacked from early Germanic scholars and promoted to meet their own ends. i.e. that they descendants of "The Aryans" conquered and civilized the Eastern world, by spreading Sanatana Dharma which later developed into forms of Hinduism and later Buddhism. It is now generally accepted by Scholars on the subject that all the evidence previously used to support this theory is complete nonsense and that all the facts point to the complete opposite. Given that India has without a doubt the largest,oldest and possibly the only remaining recorded accounts of ancient history it is worth a look to see exactly what they tell us. Many of there ancient vedic texts can be supported at least geographically by archaeological evidences, to get to my point...like the German version of the original Swastika, their version of history was similar, upside down..a reflection or distortion of the truth, motivated by ambition, greed and the desire to lord over the world. Anyone intrested in the matter should have a look at works by Dr Richard Thomson, an expert in the field of vedanta study.